"The Expanse" relaunches on Amazon as stunning and complex as before

Whether you’re an Earther, Belter, Martian, or new viewer, the sci-fi series eases the entry into its new home 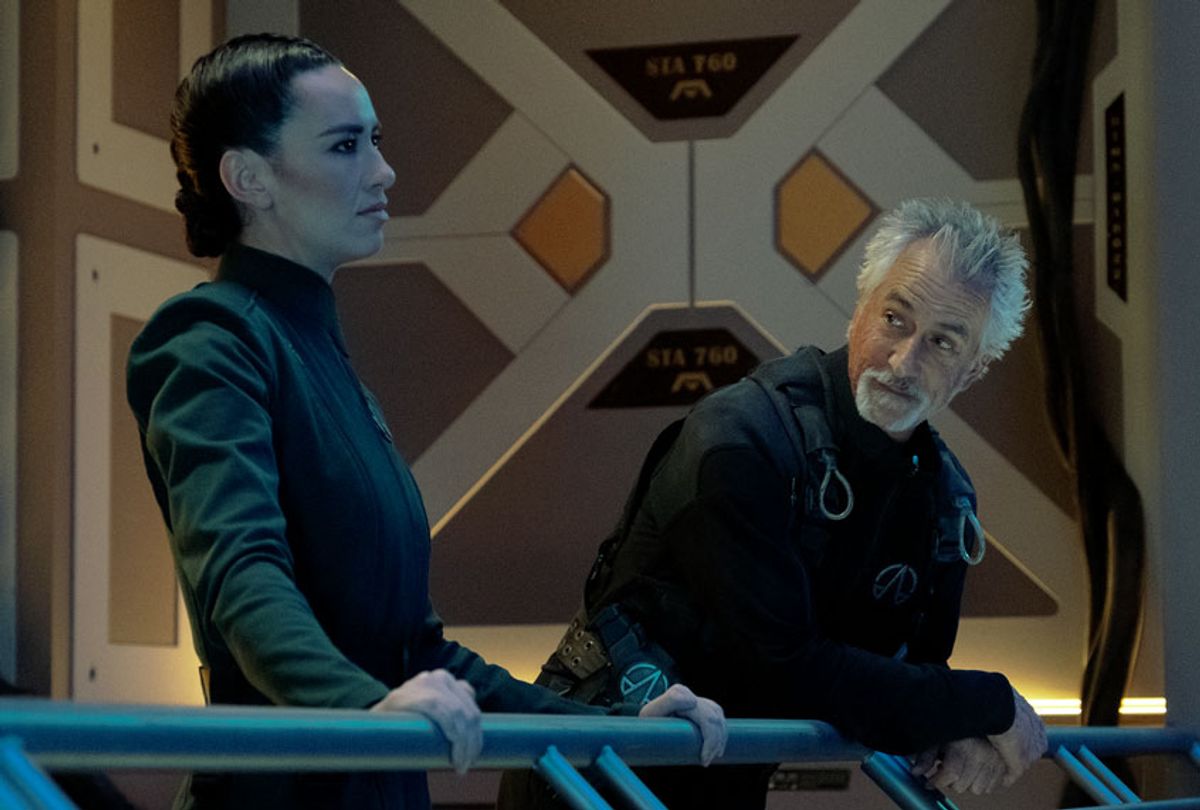 Contrary to what the overwhelming success of a certain fantasy-based series might indicate, dense and complex genre fiction and TV don't easily mix. "The Expanse" evinces this in the best sense while also proving why it struggled to catch on with Syfy's audience.

"The Expanse" is a fading breed of science fiction TV series, a sweeping operatic saga that takes its realism seriously while filtering universal themes about the human condition and mankind's higher and baser traits into a fascinating speculative tale.

As a contemplative work of art, "The Expanse" has few peers in the medium in terms of its intricately crafted visuals and world-building, and is rightly hailed for its attentive devotion to correctly portraying basic principles of physics and science without overwhelming the viewer. This series is stunning in all the right ways.

It's also one that requires close viewing and commitment, whose comprehension is assuredly assisted by reading the eight novels upon which it is based — and each of the books from which the first three seasons draw their plots is dauntingly thick. (The latest seasons closely follow the events of the fourth book, "Cibola Burn.")

I would never steer anyone away from reading them or any other worthy source material. But I've also been professionally evaluating this medium for long enough to wager that the number of people eager to supplement their understanding of a show by paging through the source material is slender at best.

This is a minor quibble among whatever list of reasons Syfy considered when it canceled "The Expanse" after Season 3.

Amazon's decision to pick it up is a bit simpler to explain at a time when streaming services are racing to stockpile original content, and perhaps gain a blockbuster franchise in the bargain. Devotees of "The Expanse" boil down its elevator pitch to describing it as "Game of Thrones" in space, a tempting possibility for a streaming service hunting for the next big thing.

The difference with James S.A. Corey's story is that "The Expanse" scrutinizes politics and social hierarchies without any sorcery or magical flourishes — though it does have a sort of mystical, inexplicable X factor in the form of a sentient phenomenon known as the protomolecule.

[Warning: Mild spoilers ahead for anyone who hasn't viewed previous seasons of "The Expanse." Which, frankly, means a lot of people. But if you're diving in uninitiated, go ahead and slightly spoil yourself or risk some level of confusion.]

Season 3 ended with a potentially massive disaster involving factions from Earth, Mars, and the Belters (the working-class denizens of the system's asteroid belt) placed on the precipice of destruction by a massive gate constructed by that phenomenon.

The gate stands between our solar system and unknown places beyond, and its defenses initially viewed the humans rushing toward it as aggressors. But before the human players tumble off this edge, the protomolecule finds a way to convey a solution through James Holden (Steven Strait), the Captain of a gunship called the Rocinante.

Turns out the protomolecule communicates with Holden through an avatar only he can see, one that takes the form of the (late) Detective Joe Miller (Thomas Jane).

By listening to that vision, Holden staves off catastrophe and opens the gate to the vessels at its mercy instead of destroying them.

The fourth season picks up soon after these events. Earth and Mars have hammered out an uneasy truce with the Belters, and Holden, the Roci's executive officer Naomi Nagata (Dominique Tipper), its pilot Alex Kamal (Cas Anvar), and engineer and resident muscle Amos Burton (Wes Chatham) are now acting as representatives of United Nations Secretary General Chrisjen Avasarala (Shohreh Aghdashloo) on a mediation mission to a planet named Ilus.

The system's political restructuring gives the Belters a seat at the table – something they really didn't have before – but the toll on Mars' militarized society is significant. We experience this through Bobbie Draper's (Frankie Adams) subplot; her actions in the previous season's denouement have consequences to her standing at home. But even if that weren't the case, a truce has left Mars needing fewer active military than before, and that means unemployment is at historic highs.

But Ilus, one of the previously undiscovered worlds beyond the ring, is where the bulk of the action takes place. A colony of Belter refugees digs in their heels on the planet in defiance of governing forces. In the process of settling the planet, they discover a land rich in minerals that they begin mining.

Earth-based company Royal Charter Energy sends a research team to analyze Ilus, laying claim to the planet in part by calling it New Terra. Neither the company nor the settlers are willing to cede their ground. And when a disaster strikes their science team's descent to the planet's surface, everyone's trigger finger gets a little itchier – particularly that of RCE security chief Adolphus Murtry (Burn Gorman, whose appearance in any series tends to coincide with dark doings).

All of this occurs before each faction is made to realize what all colonizing forces eventually discover: they aren't the first beings to claim Ilus/New Terra for themselves.

Complicated as this set-up might read, the sheer gorgeousness of "The Expanse" goes quite a distance toward shoring up a person's commitment to it, as do the performances. Aghdashloo is regally brusque, and her comportment as the top leader on Earth is as formidable as her outfits. (I'll take one of everything, thanks.)

In fact, the very presence of this Oscar-nominated, Emmy-winning actor in this cast should tell a person something about the caliber of the writing. The drama's scripts bring out solid performances in its cast, Tipper in particular this season. Naomi is a woman who has spent her life in space, and watching her celebrate the mere act of setting her feet on a planet's surface for the first time is uplifting. That is, until the combined effects of gravity and atmosphere kick in.

"The Expanse" also is a wonderful playground for David Strathairn as the commander of a Belter ship who wavers between his allegiance to the new interplanetary order and his loyalty to a people who are done with being looked down upon. And his leader's persona is fatherly and easygoing in some moments and fatally unforgiving in the turning of a second.

A heavily serialized show like this one will never be easily accessible to newcomers who drop into mid-voyage. Ergo, to say that this previous description provides all you need to know to get up to speed is not quite accurate. But it does help that these new episodes reconfigure the grid a bit and simplify the plot.

The Ilus/New Terra conflict takes up much of the space within the episodes provided for review; as such, "The Expanse" reprises the structure of the opening episodes of the series by taking time to set up or re-establish the factions and their motivations.

Some might find the story's velocity to be saddled with residual drag from the Slow Zone; you'll have to watch Episodes 10 through 13 of the third season to get that reference. But even they may appreciate the efficiency with which the reigning themes of the series remain in play while still finding ways to evolve.

It does this without sacrificing spectacle or production value, or tossing out its examination of class oppression in favor of aggressive, heartless action — although it contains its share of ruthless bloodshed and appears to be spoiling for more to come.

"The war does not end when people put down their guns. It ends when they reconcile," observes Secretary General Avasarala. "Until then, the war has only paused." That tension in between is worth mining, and for now it seems "The Expanse" has the platform and the space to achieve that.

Season 4 of "The Expanse" begins streaming on Amazon Prime on Friday, Dec. 13.