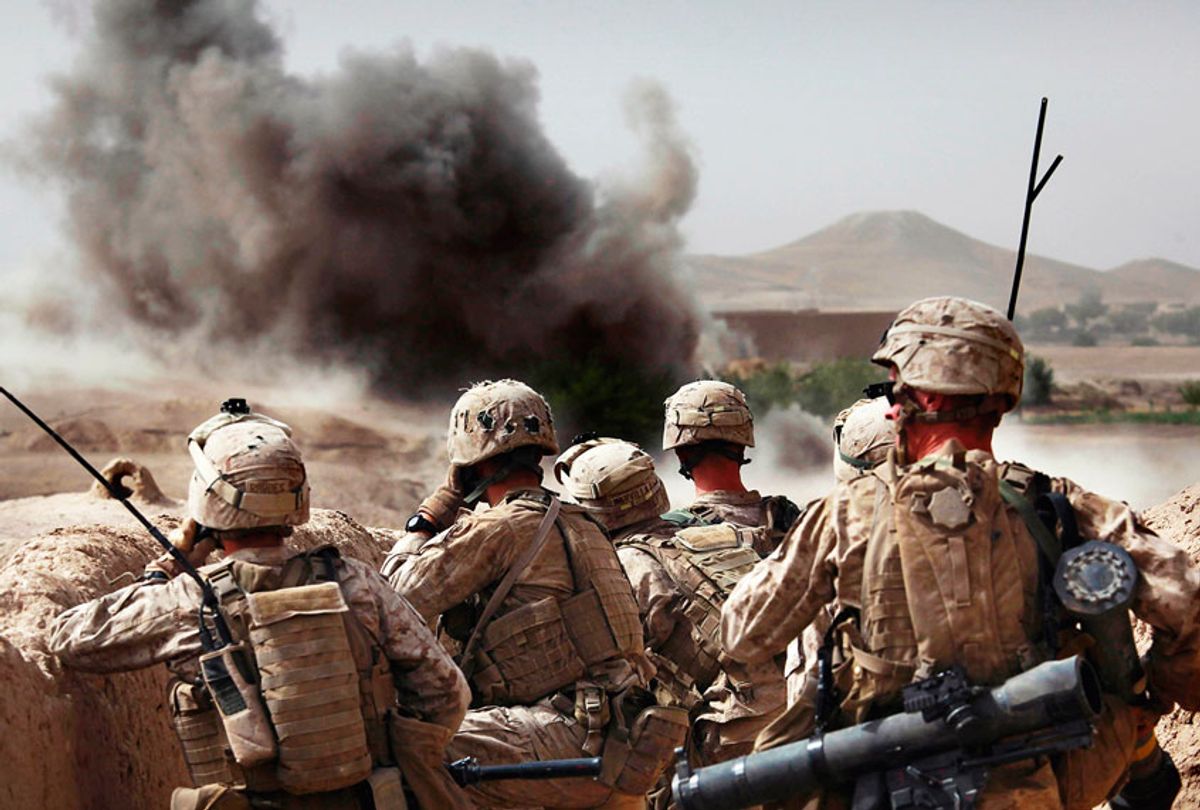 United States Marines from Bravo Company of the 1st Battalion of the 2nd Marines watch the explosion after calling in an airstrike during a gunbattle as part of an operation to clear the area of insurgents near Musa Qaleh, in northern Helmand Province, southern Afghanistan (AP Photo/Kevin Frayer)
--

On Monday, December 9, The Washington Post released a confidential trove of 2,000 pages of government documents that revealed that senior U.S. officials repeatedly failed to tell the truth about the war in Afghanistan. They document in detail a practice of lying, deception and whitewashing that covered up unmistakable evidence that the war had no grand plan, no end in sight and no consistent leadership.

The series of articles published by Craig Whitlock in the Post, along with the original documents themselves, detail a horrifying pattern of deception and dysfunction in what is now the longest war in U.S. history.  “U.S. officials,” Whitlock notes, “constantly said they were making progress. They were not, and they knew it.”

What makes these lies so disturbing, according to Whitlock, is the fact that they supported a war that cost the U.S. $1 trillion and led to the loss of 2,300 troops and 20,589 wounded in action. Whitlock reports that since 2001, 775,000 U.S. troops have deployed to Afghanistan, many repeatedly.

He also reports the toll on Afghan lives. He explains that, all told, over 157,000 lives have been lost in Afghanistan as a consequence of the U.S. invasion and of these 149,898 are Afghans. That number includes 43,074 civilians and 64,124 members of the Afghan security forces.  That number, though, does not include Afghans wounded, displaced and/or traumatized by the war.

But, perhaps most importantly, the numbers of Afghan causalities are estimates. Whitlock points out that, in general, the U.S. government has “avoided publicizing body counts” and that numerous interviews revealed that the government “routinely touted statistics that officials knew were distorted, spurious or downright false.”

The lack of accurate statistics should bother us, just as the misrepresentation of them should disturb us even more. But the greatest outrage over these numbers is the fact that the United States never seriously considered that they needed to document the loss of Afghan lives in the first place.

Of course, the Afghanistan War was not only about building a democratic future for the nation. It was also about hunting down Al-Qaeda, toppling the Taliban and thwarting a future 9/11, but, as Whitlock reports, those objectives were accomplished in the first six months of the war. After that, the U.S. strategy was plagued by mission creep; one that pretended to be in the best interest of the Afghan people.

Yet, how exactly do you make the case that the War in Afghanistan was meant to offer Afghans peace and stability when their lives didn’t even matter enough to be counted?

Those times that Afghan lives were counted, it was done to help justify the war, to critique its tactics or to congratulate those behind it. James Dobbins, a former U.S. diplomat, told a Senate panel in 2009 that there was one main reason to count Afghan casualties of the war: “I do think the key benchmark is the one I’ve suggested, which is how many Afghans are getting killed. If the number’s going up, you’re losing. If the number’s going down, you’re winning. It’s as simple as that.”

Dobbins’s logic reveals the cruel calculus of a war that never really took any interest in the future of Afghanistan or its inhabitants.  Note how, for example, his notion of winning and losing is not a reference to Afghans, but rather to the successes or failures of the United States.

And that’s where the real outrage over the Afghanistan Papers lies. The Post's coverage focuses on the money spent on the war, on the U.S. casualties and on the lack of mission, framing the way that the U.S. public was lied to about the war as the great offense revealed by these documents as.

The fact that such questions are outside the scope of debates over the efficacy of the war in Afghanistan simply underscores the sick reality that the war never, ever was about taking Afghan lives seriously.

Well before the United States decided to invade Afghanistan after the events of 9/11/2001 it was clear that the U.S. public had little concern for the autonomy, well-being or dignity of Afghans.  But the events of 9/11 only made those perceptions worse.

It is important to recall the role that the news media played post-9/11 in depicting Afghanistan as a country of lawless barbarians who were alternately savages that needed to be tamed or helpless victims that needed to be saved. In those early days after 9/11, as the United States was launching the war, Western audiences learned very little about the actual impact of the war on the Afghan people. Almost all reporting refused to consider the Afghan people as human beings deserving of dignity and respect.

Those few journalists who did try to depict the cost of the war from the perspective of the Afghans themselves came under vicious attack. In her account of working in Afghanistan after 9/11, former NPR reporter Sarah Chayes wrote that each time she attempted to report on the human aspect of the war she was met with hostility on the part of Western audiences. She describes a pattern where any pieces that tried to cover the human side of the story were censored or cut: “We were just supposed to dig up stuff to substantiate their foregone conclusions.” In one example, she refers to a CNN reporter who was told explicitly not to film civilian causalities.

She recounts one time when she did a piece for NPR on Afghan civilian causalities. In response, she received “vituperative reactions" from listeners: “One said he was so angry that he almost had to pull his car off the road to vomit.” Another complained that she was tired of hearing the “whimpers of afghany [sic] children, the pleas of parents who have lost loved ones.” Rather than tolerate such “propaganda,” this listener decided to turn off NPR in order to “listen to a Mozart CD for the rest of the morning.”

It is essential that we recognize the extraordinary lack of empathy for the Afghan people betrayed by these quotes, because it is only in that profound disregard for their lives that we find the answer to why the war in Afghanistan has become “unwinnable.” How exactly does the U.S. win a war when the people we are supposed to be fighting to defend don’t matter?

One stark way to take note of this reality is to remind ourselves of the fact that there was virtually no significant response to reports of U.S. air strikes on Afghan weddings. If a bombing attack on a wedding celebration doesn’t move you to care for the lives lost, little will.

It gets worse. After reports of mistakes in “surgical” strikes that led to significant civilian casualties, we soon got reports of atrocities committed by U.S. servicemen. One extraordinary example took place in Panjwai, Afghanistan, in 2012, when U.S. Army sergeant Robert Bales went on a killing spree, which left 16 civilians dead, 9 of them children. Bales then burned 11 bodies, including those of four little girls.

He wasn’t alone. Bales served at Joint Base Lewis-McChord in Kandahar, where there were reports of other atrocities committed by soldiers, including that of the “Kill Team,” a group of U.S. Army soldiers who murdered Afghan civilians and then posed for photographs with the dead bodies.

In these stories Afghan bodies may be counted, maybe even photographed, but they don’t matter. Or, more accurately, they exist as bodies to defile, degrade, destroy and discard.

When Rolling Stone’s Mark Boal covered the story of “The Kill Team”, he noted that there was “a front-line culture among U.S. troops in which killing Afghan civilians is less a reason for concern than a cause for celebration.” He quotes one soldier who openly admitted that “Most people within the unit disliked the Afghan people, whether it was the Afghan National Police, the Afghan National Army or locals.”

The newly released Afghanistan papers reveal that the stories of Bales and “The Kill Team” were part of a larger pattern of bias that literally ran through the attitudes of the U.S. military serving in Afghanistan. Whitlock refers to an unidentified U.S. soldier who said that Special Forces teams “hated” the Afghan police whom they trained and worked with, calling them “awful — the bottom of the barrel in the country that is already at the bottom of the barrel.”

Reports of the ways in which the U.S. military lacked respect for Afghans — whether for civilian deaths or for their autonomy as a people or their future as a nation — are now almost two decades in the making yet, to date, this profound prejudice has not been taken as a serious reason why the Afghanistan War is doomed to failure.

It is these attitudes that make the efforts to offer autonomy to the Afghan people seem both disingenuous and deceitful.  Somehow, each time the Afghanistan War is exposed as a disaster, the official rhetoric suggests that it is time for Afghans to step up and start taking over for themselves. On December 1, 2009, President Barack Obama, in a speech at the U.S. Military Academy at West Point, N.Y, stated that “The days of providing a blank check are over. . . . It must be clear that Afghans will have to take responsibility for their security and that America has no interest in fighting an endless war in Afghanistan.”

Blank check? That Obama would refer to the U.S. role in Afghanistan in such a way underscores the bizarre logic that imagines that Afghans can be hated and destroyed and manipulated by the United States while also responsible and accountable for building a future made out of the rubble we’ve created.

But Obama wasn’t really talking to Afghans then; he was talking to the military and to the U.S. public. In fact, again and again, from Bush to Obama to Trump, the U.S. public has heard that the way out of the war is for Afghans to take over the project of nation-building. Yet, the problem has been that the nation the Afghans were expected to build was never their idea to begin with. Rather, it was the ill-conceived, poorly executed, and highly dysfunctional nation that the U.S. military attempted to force on the Afghan people. The project was always more about American exceptionalism and imperialism than it was about building a peaceful and prosperous Afghanistan.

Much will be made of the evidence revealed in the Afghanistan Papers and it will be of great value if they are used to hold the U.S. accountable for its deceptions, mistakes and failures. But if we don’t use this as an opportunity to rethink Western treatment of Afghanistan, then we have no hope of developing a meaningful response.

Until the lies to the U.S. public are seen as on par with the lies to Afghans and until the cost to the United States is calculated alongside the cost to Afghanistan, these documents will do nothing more than serve as a reminder of the destruction born of U.S. conceit.