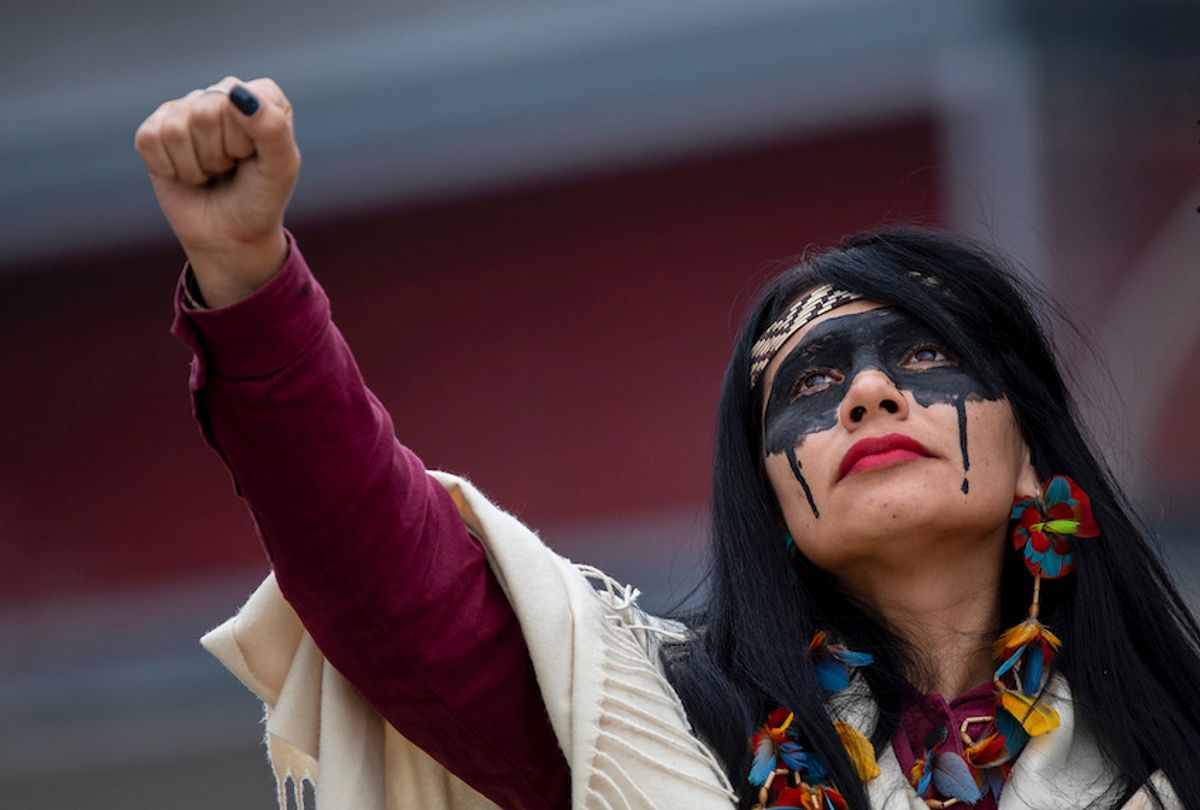 An indigenous leader from Brazil takes part in a protest outside REPSOL Headquarters on December 08, 2019 in Madrid, Spain. Indigenous leaders and activists are protesting in Madrid against oil contamination and the fossil fuel industry in Brazil because of the damage it provokes to the poorest communities, sea life, food supplies and the climate. (Pablo Blazquez Dominguez/Getty Images)
--

Protests and uprising erupted across the world this year. In Chile, a transportation fare strike boiled over into mass demonstrations against austerity and inequality. In Bolivia, a contested election and military coup led to violent street clashes between the left and the right. In Haiti, Lebanon, Iraq and Iran, governments waged bloody crackdowns as protests against corruption, poor public services and unemployment became riotous demonstrations against the ruling elite. Climate strikespopped off in all corners of the globe.

The list goes on. While there has been progress globally in meeting the very basic needs of people on the lower rungs of the economic ladder, demonstrations and civil unrest across the world is proof that societies are not functioning as they should, United Nations officials said on Monday. A “new generation” of inequalities around education, technology and the degree to which communities are impacted by climate change has emerged. These rising inequalities threaten to create a “new great divergence” of a scale not seen since the Industrial Revolution, the UN warned.

The report comes as the UN holds an international climate summit in Madrid, where protesters gathered on Monday to demand bold action on the climate crisis that addresses social injustice.

“Different triggers are bringing people onto the streets — the cost of a train ticket, the price of petrol, demands for political freedoms, the pursuit of fairness and justice,” said Achim Steiner, administrator of the United Nations Development Programme (UNDP), in a statement. “The wave of demonstrations sweeping across countries is a clear sign that, for all our progress, something in our globalized society is not working.”

Unless governments take action, rapid advances in technology and the intensification of the climate crisis will exacerbate global inequalities, according to the UNDP’s new report. The rich will continue consolidating state power, turning economic imbalances into entrenched political domination and further eroding democracy. As seas rise and poorer regions experience increased drought, flooding, extreme weather and high temperatures that threaten public health, the gap between the poor and the rich will continue to grow.

Here’s the good news: unprecedented number of people across the world are escaping extreme poverty. Levels of “human development,” which the UN measures by examining life expectancy, access to education, gross national income and other factors, have risen in countries worldwide over the past three decades (although growth slowed after 2010).

However, such growth remains low in sub-Saharan Africa, pointing to a reality: The distribution of development gains is vastly unequal, both between countries and within individual countries. Global gains in education and life expectancy in 2018 alone would be 20 percent higher if they were shared equally, according to the UN. About 600 million people worldwide still live on less than $1.90 a day. Subscriptions to broadband internet are growing 15 times faster in countries with very high levels of human development than in countries with low levels of development.

To measure inequality, the UN is now looking far beyond income. While more people have access to basic education, access to technology such as the internet can make or break an individual’s economic chances. For billions of people across the world, gender, ethnicity, sexual orientation and family wealth are still the determining factors of their place in society. The poor often face discrimination under oppressive laws and social norms that prevent their political empowerment, and they are disproportionately impacted by pollution and environmental problems.

The United States provides a perfect example. The U.S. economy leads the world in gross domestic production but is ranked 15th globally for human development behind Singapore, Hong Kong and a number of European countries. Income inequality has exploded over the past half century, and today the U.S. has the sixth highest rate of income inequality in the world. The top 1 percent of U.S. households own more wealth than the bottom 90 percent combined.

Despite being the richest country on the planet by GDP, life expectancy in the U.S. has dropped in recent years, and research suggests that health problems, poverty and economic despair are driving factors. In this country, the difference between average life expectancy at 40 between the top 1 percent of earners and the bottom 1 percent is 15 years for men and 10 years for women, according to the UN. Lower-income communities across the U.S. lack access to clean air to breathe and water to drink. Millions of people do not have affordable health coverage, including 3.8 million children.

As in other countries, researchers say unmitigated climate change will increase inequality in the U.S. because its impacts will be felt hardest in regions that are already poorer on average, such as the Gulf Coast. Of course, wildfires, extreme weather events and other climate-related disasters are already damaging public health.

Climate change is also driving emigration from poor countries to richer countries, including in Central America, where thousands have fled to Mexico and the U.S. The climate crisis is creating complex new shades of inequality, the UN reports. While wealthy people and richer countries are responsible for most of the world’s energy consumption and carbon emissions, they are also better positioned to deal with the global impacts. Meanwhile, people living in poorer regions are more likely to be impacted and even displaced by rising seas, natural disasters and disruptions to agriculture.

The humanitarian crisis on the border of the U.S. and Mexico is just one example of how inequality creates violence and conflict. President Trump rose to power with a reactionary, anti-immigrant message, and his administration responded to an influx of migrants from poorer countries by forcing them into squalid camps on the Mexico side and incarcerating as many of those who make it to the U.S. as possible.

Then there are the uprisings in the streets, the mass anti-government demonstrations and pitched battles between polarized political factions that have come to define 2019 globally. The UN warns that, if the climate crisis is allowed to continue alongside a global concentration of wealth and power among the elite, civil unrest is bound to continue as inequalities grow increasingly stark.

“Inequality is not just about how much someone earns compared to their neighbor,” Steiner said. “It is about the unequal distribution of wealth and power: the entrenched social and political norms that are bringing people onto the streets today, and the triggers that will do so in the future unless something changes.”

The UN has several recommendations for avoiding this deepening of inequality, including investments in early childhood education and progressive taxation that encourages clean energy and reinvests in society at large through social programs that address economic injustice. However, powerful industries and reactionary politicians across the U.S. and the world remained steadfastly opposed to reducing fossil fuel production and programs that redistribute wealth. Like Trump, they attack immigrants even as violent conflict and climate disruption forces more people to flee their homes.

If we’ve learned anything in 2019, it’s that people across the globe are fed up with their leaders and refuse to be left behind in a rapidly changing world. When change fails to come from above, they will demand it in the streets.