Jesus and his family separated in cages? This is just the latest example of the classic scene used to take a stand 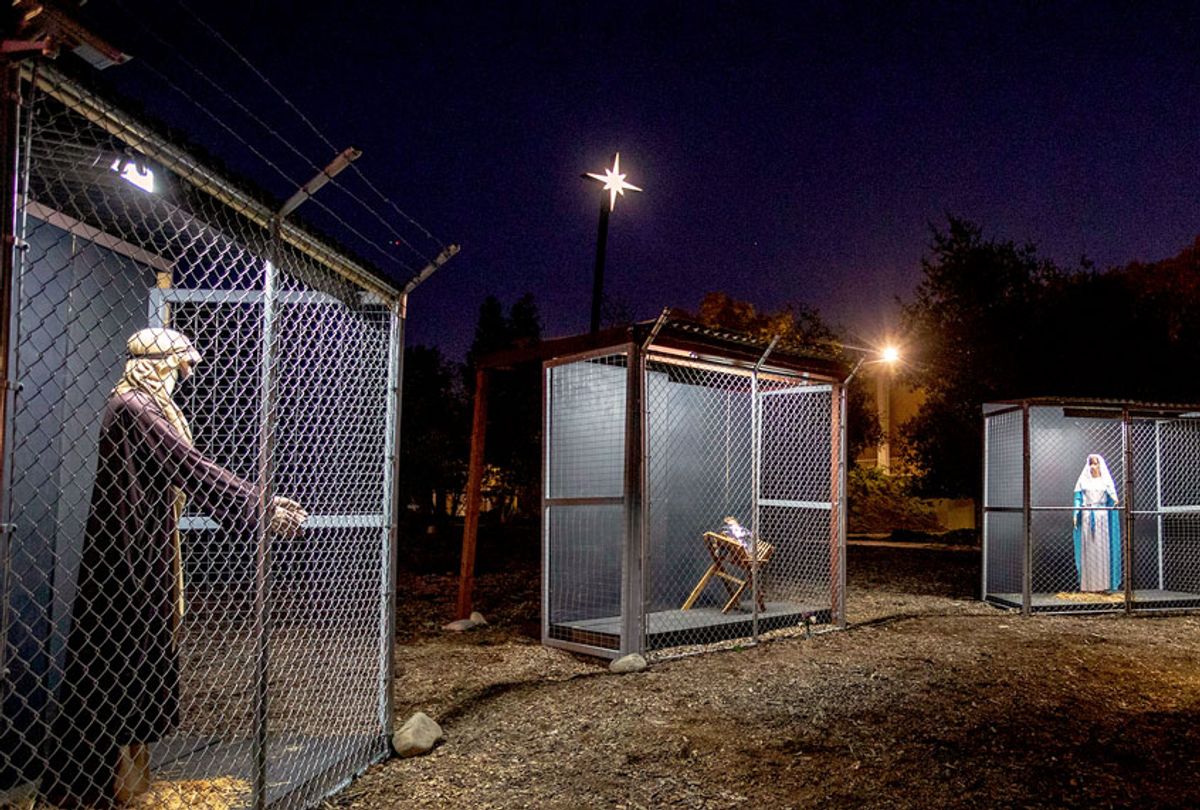 A Christmas nativity scene depicts Jesus, Mary, and Joseph separated and caged, as asylum seekers detained by U.S. Immigration and Customs Enforcement, at Claremont United Methodist Church on December 9, 2019 in Claremont, California. The church hopes the display will prompt viewers to ask themselves what the family would face today if seeking refuge in the U.S. as they did when fleeing Nazareth to Egypt to escape capture by the forces of King Herod. The Claremont United Methodist Church has worked to assist asylum seekers at the U.S.-Mexico border. (David McNew/Getty Images)
--

An earlier version of this story misattributed the final quote to Pastor Karen Ristine; it was made by supporter Patricia McGrath. This version has been corrected.

Many people know the story: Joseph of Galilee travels with his pregnant fiancée, Mary, to the city of Bethlehem. Once they arrive, they find out there is no room in the inn, but the innkeeper makes room for them in his stable. Meanwhile, angels visit a group of shepherds to alert them to the coming of a savior; they’ll find him lying in a manger.

This story — found in the New Testament books “Matthew” and “Luke” — is the basis for one of the most recognizable visual images in Christian tradition, the nativity scene. There’s the newborn Jesus in a manger, flanked by Mary and Joseph. Shepherds and the three Biblical Magi, or Wise Men, visit with gifts and reverence. A cow and sheep may be in the midst, as well.

Miniature versions of this scene fill Christian households during the month of December (sometimes longer), while slightly larger versions are often placed in front of churches; they exist for some as a deeply meaningful signifier of grace and salvation, for others simply as a signifier of the season. But over the last Christmas seasons, some religious leaders and their congregations have moved towards using the nativity scene as a political statement.

At Claremont United Methodist Church in Claremont, Calif., the leadership has installed a nativity scene that depicts Mary, Jesus, and Joseph as refugees in separate cages, a reference to asylum seekers who have been separated from their families at the United States/Mexico border.

According to Claremont pastor Karen Ristine, there is a theological statement posted with the nativity.

“In a time in our country when refugee families seek asylum at our borders and are unwillingly separated from one another, we consider the most well-known refugee family in the world," she wrote in a public Facebook post. “Jesus, Mary, and Joseph, the Holy Family. Shortly after the birth of Jesus, Joseph and Mary were forced to flee with their young son from Nazareth to Egypt to escape King Herod, a tyrant. They feared persecution and death.”

She urges people who see the nativity scene to consider whether their family would be welcome in the United States if they were seeking refuge today.

In 2017, parishioners at St. Susanna Church in Dedham, Mass. installed a nativity scene that, at first, looks traditionally peaceful — Jesus is sleeping, as are the nearby sheep nestled in hay. But above the manger was a sign listing 16 mass shootings that had occurred in the United States since the massacre at Columbine High School in 1999.

At the time, Father Steve Josoma told the Boston Globe that the idea to place the names on the wall came out of a meeting of the congregation’s Pax Christi group, which is part of an international peace movement.

“It’s like ‘Groundhog Day,’ ” he said. “There’s a shooting, and we’re told, ‘We can’t talk about it now,’ and then the next shooting happens. . . . Our honest intention was to keep the conversation going,” Josoma told the Globe. “It’s our new normal unfortunately, and [the display is] to jar people out of that place of accepting it as the new normal.”

The Pax Christi group, Josoma said, felt Christmas was an appropriate time to do this work because of the Jesus’ Biblical calls for nonviolence and peace.

Then back in 2014, Portland-based illustrator Everett Patterson released a Christmas card that offered a contemporary analogue to the traditional nativity scene. It was titled “José y Maria” and features a young couple standing outside a convenience store in the rain; José is on a pay phone looking tired, Maria — who is wearing a Nazareth High School sweatshirt — stands nearby, gently holds her stomach. A seedy hotel’s “No Vacancy” sign flashes in the background.

“I have a small hope that this Christmas image will come to mind when we see other ‘down and out’ people huddling outside of gas stations,” Patterson wrote. “Reminding us that our Savior’s parents — and indeed, Jesus himself — were at one time similarly troubled.”

Many of these iterations of the nativity scene have been praised for using the age-old story to shine a light on contemporary political issues, and cause viewers — both religious and non-religious — to think about what the church’s response to those issues should look like today.

But they have also received a fair amount of criticism.

In response to the most recent example of Claremont United Methodist’s nativity scene, Fox Nation Host Tomi Lahren said in a Dec. 10 episode of “Final Thoughts” that the display was blasphemous.

“Leave it to a California church to turn the Christmas story into a political ploy intended to demonize border agents, border security, and of course, Donald Trump,” Lahren said.

She continued: “They ['Democrats and Leftist mainstream media members'] are all disingenuously pushing this narrative just to demonize our border agents, border security, and our president. The illegal immigrants are just political pawns in the game.”

“This is NOT a statement of scripture, It IS a statement of today's policies,” McGrath wrote in response to the image of the church's nativity scene. “Shame on this administration. There are children dying everyday in cages. Just because it isn't talked about in the news everyday (which it should be) doesn't mean it isn't happening.”