Senators have a choice: convict Trump or crown him 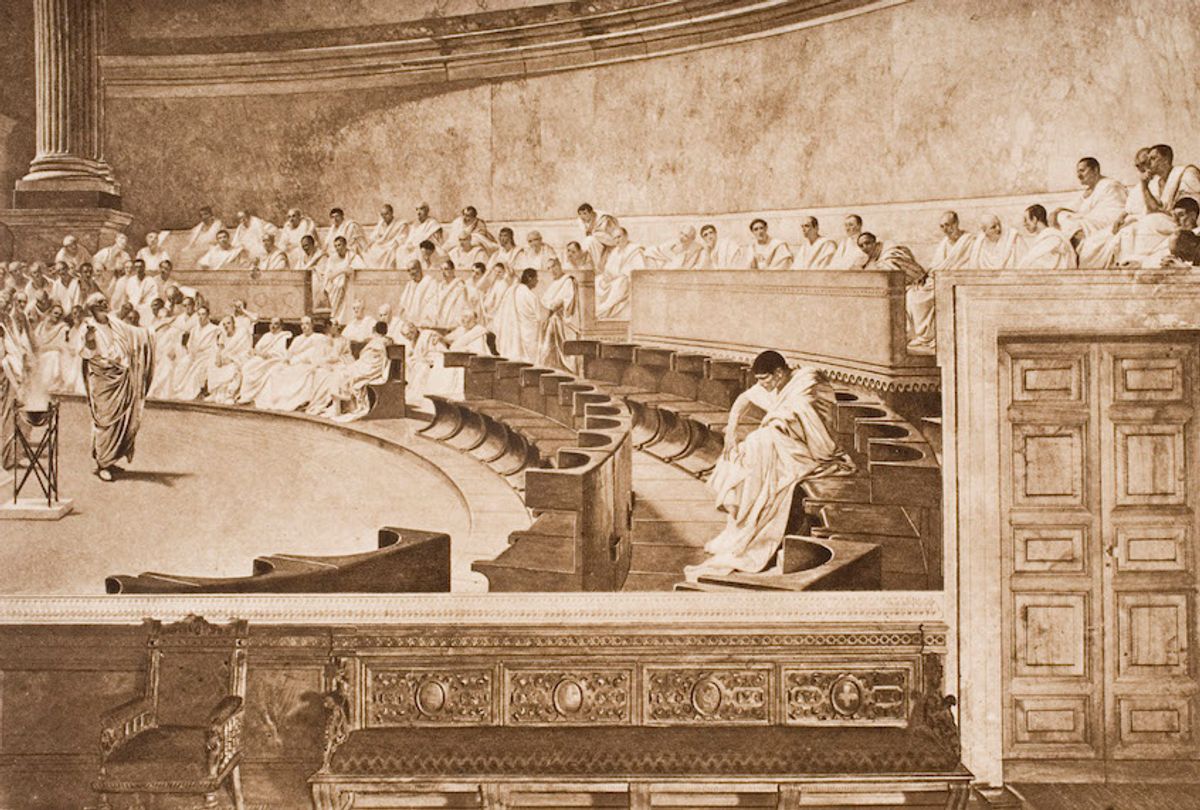 Cicero and Catiline in the Roman Senate, from the book The Outline of History by H.G.Wells Volume 1, published 1920. (Universal History Archive/Getty Images)
--

The two articles of impeachment, which have drawn criticism as either too much or too little, strike me as cleverly drafted to put Senate Republicans in a most uncomfortable box.

The second article, obstruction of Congress, should be the tougher one for Senate Republicans. It flows from Donald Trump’s stonewalling the impeachment inquiry — no testimony, no documents.

On top of this utter contempt of Congress, Trump claims absolute immunity from investigation by anyone for anything. His lawyers asserted in federal court in October that the NYPD could not investigate even if Trump literally shot someone on Fifth Avenue.

The second impeachment article, the one that should vex Senate Republicans, says that Trump “directed the unprecedented, categorical, and indiscriminate defiance of subpoenas issued by the House of Representatives pursuant to its sole Power of Impeachment. President Trump has abused the powers of the Presidency in a manner offensive to, and subversive of, the Constitution…”

The facts are undisputed. Trump did exactly what is charged. While House Republicans mock the impeachment articles, they have not even tried to dispute the facts. Instead, some of them literally yell that the proceeding is unfair, but it is Trump who spurned an invitation to testify from Speaker Nancy Pelosi.

Let Trump get away with this total defiance of Congress and a future Democrat or independent could do the same.

If Senate Republicans turn a blind eye to this blanket defiance and let Trump off the hook, they will be deciding that future presidents can defy Congress any time they wish. They would be destroying the fundamental Constitutional duty of Congress to oversee and investigate the conduct of the Executive branch.

Would Senate Republicans like to enable some future Democrat or independent in the White House who ignores Congress?

Context matters. In this case, Trump says Article II of our Constitution gives him unlimited power. Do Senate Republicans want to validate that position?

Those are the arguments that House Democrats prosecuting the impeachment case should drive home. So should voters, especially Republicans represented by senators in their party — unless they like dictatorial presidents.

Of course, the Republicans have demonstrated again and again that they don’t care about precedent. Some examples:
Former President Barack Obama was denied a hearing on his Supreme Court nominee in his last year in office, but Republicans say they’d confirm a nominee if a court seat opens up during Trump’s last year in this term.
The Republican-controlled Supreme Court made George W. Bush president by a vote of 5-4 and said, pointedly, that their decision wasn’t precedent.
Newt Gingrich a few days ago bemoaned that the Democrats were barreling toward impeachment at Christmas time, yet Gingrich had Clinton impeached the week before Christmas.

The real issue: Are we a nation of laws or men? Do we have checks and balances on power or do we side with Trump’s repeated assertions that as president he is unbound from any limits on his conduct?

"Do whatever I want"

Here are just two examples of Trump’s statements that he believes he is possessed of unchecked powers.

“I have an Article II where I have the right to do whatever I want as president, but I don’t even talk about that,” Trump said in July. He also said that Article II “gives me all of these rights at a level that no one has ever seen before.”

That is, of course, not true as anyone who has ever read the thousand words in our Constitution’s second article.

Now there is one condition under which it makes perfect sense for Senate Republicans to keep Trump in office. If they want a dictator and not a president with specific and limited authority, then they should vote to acquit.

Of course, that would be the end of America as we know it.

Trump reminds us frequently that he is thinking about staying in office until he dies. At rallies for the 2020 campaign, he talks of how this would be good — and then issues a disclaimer that he is only joking.

But this is no laughing matter. And we should worry that he is looking for a way to seize power given both his open contempt for the rule of law and his embrace of dictators: Putin, Kim, Duterte, Erdogan, and Xi, not to mention the murderous Saudi regime.

For more than four years, I have warned that Trump is a wannabe dictator, a man with no loyalty to country or principle, but only to himself. He lusts to become Emperor Donald I, even though he might not use that title if he seizes full power. And he wants to be followed by his oldest daughter as Empress Ivanka I.

In his own jumbled mind, Trump has long believed that he is superior to the rest of us. He has told us that he alone can solve our problems.

A privileged and powerless senate

Our Senate might still exist under Trump the dictator. When ancient Rome transformed from a republic into a dictatorship, the Senate remained, a privileged but powerless vestige of a bygone era.

Do Senate Republicans believe, as Aristotle observed, that democracy means to rule and to be ruled in turns? If they do, then how can they set a precedent that a future Democrat in the White House can hold Congress in contempt and ignore its subpoenas?

This is not an issue of litigating a Congressional subpoena by turning to the third branch of our government. That is taking place right now with federal courts adjudicating Trump’s refusal to comply with a 1924 law says the tax returns of any American “shall” be provided to Congress on request. That defiance is not impeachable unless our Supreme Court eventually rules against Trump, as I expect, and he refuses to comply.

Trump’s oath requires him “to the best of my ability, preserve, protect and defend the Constitution of the United States.”

By asserting that he is beyond the reach of Congress, Trump is openly violating his oath. That’s grounds for removal.

The first article of impeachment may give Republican senators an out to acquit Trump by disputing the facts.

The first article of impeachment charges that Trump “solicited the interference of a foreign government, Ukraine, in the 2020 United States presidential election. He did so through a scheme or course of conduct that included soliciting the Government of Ukraine to publicly announce investigations that would benefit his reelection, harm the election prospects of a political opponent, and influence the 2020 U.S. presidential election to his advantage…  in a manner that compromised the national security of the United States and undermined the integrity of the United States democratic process. He thus ignored and injured the interests of the Nation.”

While the evidence in this is overwhelming, there is room to dispute some facts, including Trump’s intentions.

But there is nothing in dispute about Trump refusing to comply with subpoenas and ordering witnesses to not testify, the subject of the second article of impeachment.

Does the Senate want to emasculate itself? Do senators want to say that their subpoenas carry no legal authority, but are mere begging requests? Is Congress a co-equal branch of government or an illusion?

Do senators respect the institution of the Senate? Or are they mere servants of Trump?

Democrats would be wise to press the point that letting Trump get away with defying Congress and claiming to be above the in prosecuting the case in the Senate, which under our constitution tries all impeachments.

There is good reason to expect they will. The impeachment articles match the streamlined and carefully framed arguments in the last two impeachments. Both were of federal judges. They were successfully prosecuted by Rep. Adam Schiff, the California Democrat who chairs the House intelligence committee.

Schiff ran his impeachment inquiry hearings with a firm hand. He prosecuted the two previous cases with what Barbara Radnofsky, in her book A Citizen’s Guide to Impeachment, describes as extraordinary skill.

The Senate has history on the conduct of such political trials, though the constitutional directives are sparse, giving wide latitude to Senate majority leader Mitch McConnell (R-Ky.) in how to proceed.

For example, it is possible that McConnell may try to dismiss the impeachment with the equivalent of what in a court of law would be a summary judgment dismissing the case. The risk here is that McConnell and anyone who votes for such an action may be seen by voters as acting in contempt of the body politic. As I read our Constitution, a trial is required, not mere disposal of the case, but that is arguable.

McConnell could also decide that no witnesses will testify, relying on the written record and debate by senators. He could try to impose rules severely limiting what House prosecutors can say.

Fortunately for all of us, our Constitution provides that when a president is on trial in the Senate the presiding officer will be the chief justice of the United States, now John Glover Roberts Jr.

Be comfortable with that. Roberts is not going to sully his reputation, or that of the Supreme Court, in whatever trial takes place. Like or dislike his jurisprudence, and as someone who reads his high court opinions, I don’t care for the long-range direction he is taking the court, Roberts conducts himself with dignity.

The question Republican senators must address, and that we must make them address, is whether they will retain any dignity, or even purpose, if they let Trump get away with his ongoing offenses to our Constitution.