He'll carry the word "impeachment" forever. And while nothing is guaranteed, he's headed for defeat in November 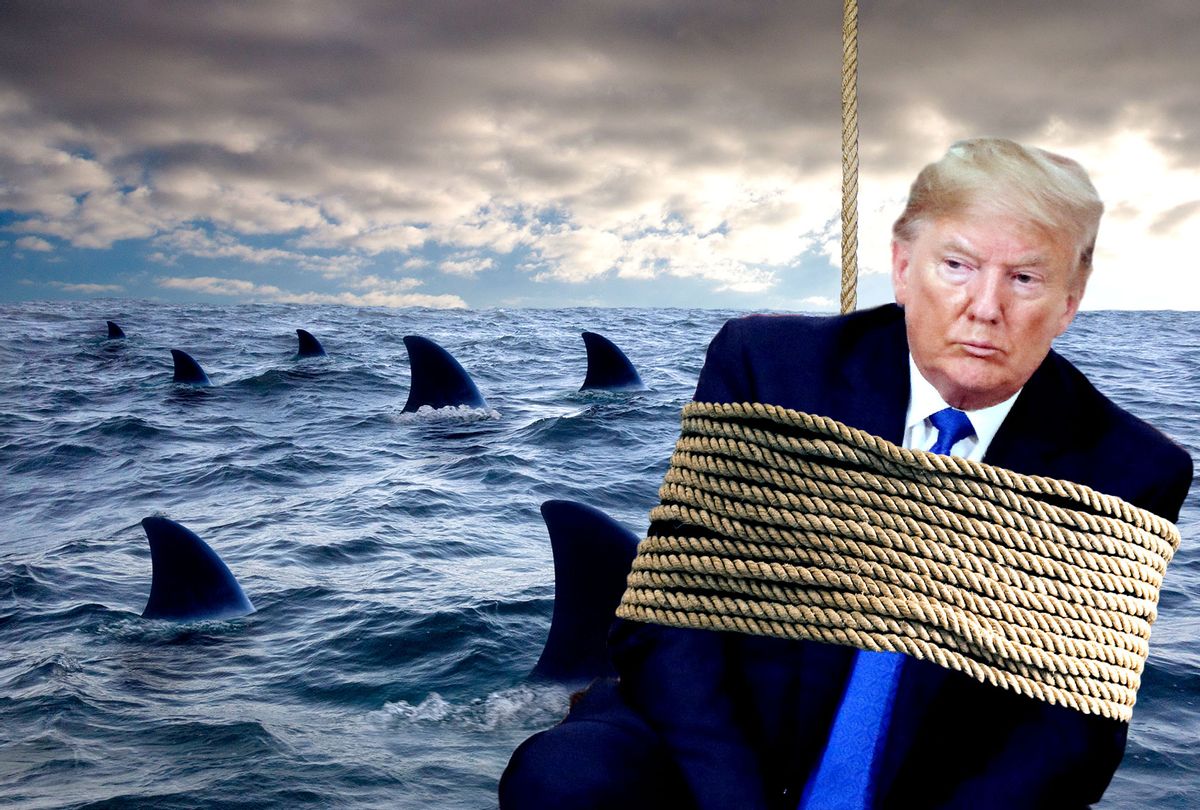 Donald Trump can throw the world’s most dramatic "Real Housewives" hissy fit. He can ceaselessly whine like the entitled Frank Burns knockoff he is until even the bots and trolls stop following his tweets. He can shout “perfect call!” until the words lose all meaning. No matter what he does, no matter how loudly he struggles to change the subject or to derail the process, Donald Trump will be impeached for obstructing Congress and abusing the power of the presidency, and the scathing words contained in those articles will live forever. In the end, the word “impeached” will feature prominently in the first line of his eventual obituary. Guaranteed.

By week’s end, Trump will almost assuredly become the third president in history to be impeached by the House of Representatives, a mandatory indictment of his trespasses against republican democracy. Irrespective of how things turn out in the Senate trial, the impeachment articles will record for all time that this president is “a threat to national security and the Constitution ... and has acted in a manner grossly incompatible with self-governance and the rule of law.”

History will forever instruct posterity that Donald Trump “has acted in a manner contrary to his trust as President and subversive of constitutional government, to the great prejudice of the cause of law and justice, and to the manifest injury of the people of the United States.”

Every Democrat running for office next year, especially the leading candidates for president, ought to memorize the above line from Article II and repeat it during every speech, every rally, every town hall and every cable news hit. It perfectly summarizes the Trump crisis in razor-sharp prose. Every word must become burned into the minds of voters with a frequency and intensity that makes “No collusion!” look rare and forgettable.

Meanwhile, how will Trump and his Red Hat cult react to all this, and how can he be stopped once he is (almost assuredly) acquitted?

Trump will continue to lie and insist that he and Rudy Giuliani are “crime fighters,” weeding out corruption, despite the fact that Trump, while the impeachment inquiry was underway, was forced to pay $2 million in damages to eight charities (Army Emergency Relief, the Children’s Aid Society, Citymeals on Wheels, Give an Hour, Martha’s Table, the United Negro College Fund, the United Way of the National Capital Area, and the United States Holocaust Memorial Museum) for defrauding them all with his bogus Trump Foundation, while his kids, Don Jr., Ivanka and Eric, were ordered to attend mandatory do-not-commit-fraud classes due to the scam they perpetrated. At the end of the day, Trump and Rudy are to corruption and cheating what Daniel Stern and Joe Pesci are to robbing houses occupied by nine-year-olds.

Of course Trump will  declare victory once acquitted by the Senate. We all know he will endlessly rant about the acquittal, too, performing childish skits during his herky-jerky pseudoephedrine-propelled rallies, re-enacting the floor vote and mocking the usual suspects.

Nevertheless, even if he’s acquitted in the Senate, which is likely, none of the underlying crimes will be erased. There will be no verdict of innocence. The Justice Department’s Office of Legal Counsel determined in 2000 that the Constitution "permits a former President to be indicted and tried for the same offenses for which he was impeached by the House of Representatives and acquitted by the Senate.” You can bet Trump will insist his acquittal is an exoneration. It’s not.

He’ll also tell his gullible fanboys he won, but the historical record needs to reflect that it won’t be a victory on merit — it’ll only be a victory through Mitch McConnell’s obstruction, a victory by the whip count and absolutely not the facts of the case. The weekend meetings between “Moscow Mitch” and the White House made it so. But anyone with open eyes will plainly see that a further cover-up is underway to conceal these and potentially other crimes.

And the acquittal will encourage Trump to commit more crimes.

How do we know this? Perhaps it’s coincidence, perhaps it’s not, but the president’s efforts via Rudy Giuliani and his White House Plumbers v.2 to extort Ukraine into helping Trump cheat in the election began at roughly the same time as the clusterf*ck surrounding the release of the Mueller report and Bill Barr’s disruptive letter.

Trump clearly felt empowered by the frustrating “thud” made by both documents, Barr’s letter and Mueller’s report. So before we knew it, he was on television telling George Stephanopoulos that he’d gladly accept foreign help with the election. Little did we know that by the time he was spilling the beans on "This Week," he had in fact already hatched a scheme to cheat in the next election.

Democrats and the press can’t allow him to get away with it by flushing impeachment down the memory hole the way they did with the Mueller report. Backing off will only empower Trump, mitigating his weaknesses — and yes, Trump’s chances of re-election are weaker than conventional wisdom now holds. As always, don’t get happy, but Trump is the weakest incumbent since George H.W. Bush, given how his approval poll average caps at around 42 percent nationally. His state-by-state approval polls show him trailing badly in the Electoral College as well.

Trump’s weak incumbency is further illustrated by the fact that he risked impeachment or worse in order to cheat, telegraphing his existential fear in advance of 2020. No one understands his weakness better than Trump himself. That's why he continues to commit the same crimes for which he’s being impeached, potentially augmenting the plot with all new election-stealing treachery as Rudy meets with shady Russian thugs and other assorted weirdos. Make no mistake: Trump will do whatever he needs to do to avoid his ouster — and the inevitable criminal prosecution once he’s gone.

Democrats, therefore, need to put on their war faces.

Once they decide on a presumptive nominee, and the party begins to unify, it’ll have to be all hands on deck until Trump is decisively trounced on Nov. 3. No issue or scandal should be off the table. No mercy. Not to overstate the obvious, but Trump needs to be crushed. Not just defeated — crushed. Sure, it only takes 270 votes in the Electoral College. But voters need to send an undeniable message of rejection. Indeed, the first step in repairing the Trump damage is to humiliate him enough to frighten off the copycats, especially his spoiled kids.

Weakness aside, the only thing Trump has going for him, outside of his brainwashed disciples, is the status of the economy, which he continues to crow about on Twitter and elsewhere. Although it might shock him and his minions to discover that manufacturing is in recession. Only one or two of the Democrats have pushed back on this broken promise, but they need to do it much more often. All of them. Starting now.

If the Democrats manage to successfully extract this cancerous tumor from the White House, Trump can still be prosecuted criminally for a variety of crimes by a more reputable attorney general than Bill Barr. The only way he can safely avoid prosecution is to resign, but he won’t because Trump always makes things worse for Trump. He could resign, be pardoned by Mike Pence and avoid prosecution for a variety of crimes. Congressional Republicans could freely proceed without this screechy, flailing albatross growing heavier around their collective necks.

A resignation and a pardon would end Trump’s legal troubles, not to mention his life-shortening stress levels, and he could easily move on to purchase and re-brand the OAN network as “Trump TV,” living out his years as the prime-time motormouth he’s always wanted to be. Maybe Mark Burnett will be stupid enough to give him back his old show. He could walk away mostly undamaged, returning to his wheelhouse as a reality show a-hole.

But Trump’s a berserker — an unapologetic crook who eats chaos for fuel. He’ll never stop until someone stops him.

Ultimately, Trump will do his best to shut the door of impeachment behind him. Given the way the last several years have played out, there’s a decent chance he’ll do it, if allowed. The firehose of news — the same firehose that’s given us 15,413 Trump lies in 1,055 days — has managed to bury dozens of skeletons so far through distraction, and there’s no reason to believe that will change in the near term. The only way the crisis can be stopped is if the Democrats suit up with a unified political attack commensurate to the magnitude of this national emergency, indelibly carving the impeachment articles into the marble epitaph of Trump’s egregiously twisted, but mercifully brief, time in office.