From 2 Chainz to Rapsody, it's been a great year for everything for the lyrical and all-out bangers 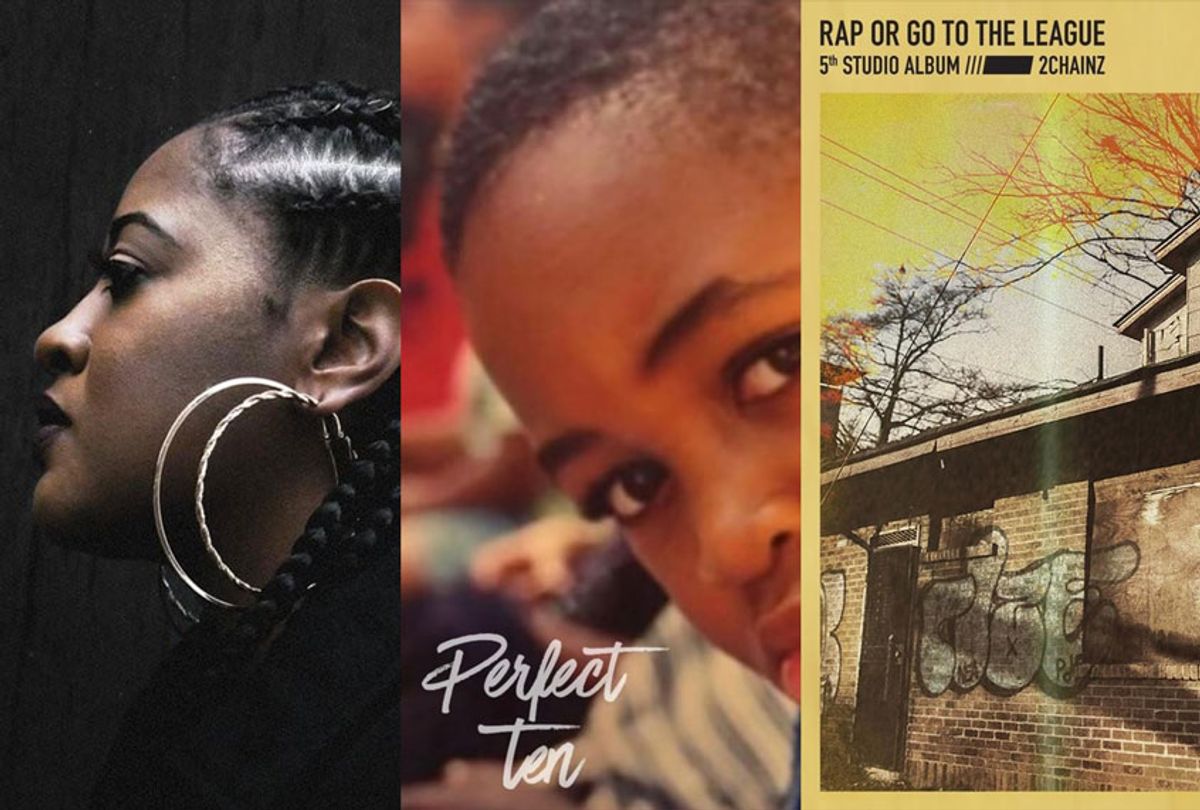 "Eve" album by Rapsody, "Perfect Ten" album by Mustard, and "Rap or Go to the League" album by 2 Chainz (Gamebread/10 Summers/Jamia)
--

It’s been another huge year for hip hop – coming out of 2018 as the No. 1 most streamed genre of music, we can only imagine the growth 2019 has brought. Thousands of new acts are emerging from everywhere, as old school artist are touring again – it’s truly a glorious time to be alive. But what should you be listening to?

It can be hard to identify the quality music that doesn’t always make it to the list your favorite streaming service recommends, so I put together the five best albums rap albums of 2019. Did your favorite album make the list? If not, rank yours in the comment section.

The idea of "rap or go to the league" had been the top career options for so many Gen X-er’s like 2 Chainz. Most don’t make it in rapping, and almost nobody makes the NBA so they fall back on a third, more dangerous option – selling crack. "Rap or Go to the League" is a collection of soulful ballads about 2 Chainz as a ball player, who didn’t catch the league and ended up in the streets. Music saved him.

"Rap or Go to the League" is brilliantly lyrical and definitely the most slept-on album of the year. His storytelling is clear and concise, the beats knock, and you’ll revisit this album multiple times, which says a lot in a time where we are consuming so much music. Some of my favorite tracks are "Forgiven," "Threat to Society," and "Money in the Way."

Here's a piece of a verse from "Forgiven."

Got a phone call from Lil' Fate
Somebody shot his son, he didn't make it
My head achin', hands started shakin'
Foul beyond flagrant
He said, "Bro, what I'm supposed to do?"
I paused, remorseful
We been partners since public school
Kids ain't supposed to die before us
As a parent, it's apparent, ain't no parents
Seeing stops once we leave the carriage
Cold of the streets react with the heat to create balance
One of the biggest revenge is prayer
Me, Sean, Dre, and Chris was there
Guess Flesh won't spend Christmas there
But in spirit, know you hearin' it loud and clear
Whole family miss you as we stare off in the atmosphere
No fear

And listen to "Money in the Way":

Mustard has carved a lane for himself as the go-to hype man and ultimate west coast collaborator appearing with acts like YG and Ty Dolla Sign. This year Mustard dropped "Perfect Ten," his third studio album, and it truly is a perfect 10 – complete with bangers from everybody including Migos, ASAP Ferg, ASAP Rocky, Playboy Carti, and many more.

The best track on the album is "Perfect Ten," one of the last songs that features the late, great Nipsy Hussle. He glides across the beat with a repetitive chant, a style he perfected in his last days.

Ken Griffey throwback
N***a had to go left
Must've popped twenty-eight times, 'cause it's four left
If it's 'bout mine, ain't a n***a that I won't check
Run through your hardest homeboy, you could go next
85 Cut', dawg, Hussle had the Rolex
Chain on my white tee, now you see the progress
Stacked every chip on myself, time to collect
All money in, just imagine what I gross back

The Sacramento rapper had another smash year applying on a number of collaborative albums including Slimey Individualz, Chop Stixx & Banana Clips (with Gunplay), and Blood Cuzzins. In 2019, I think Mozzy truly found his voice – on "Internal Affairs," the only solo project he dropped this year, the rapper comes off as more relaxed, confident, and comfortable in his own skin.

Sacramento is becoming one of the most intricate characters in his music, and he’s definitely carrying the city on his back. I can’t wait to see what he does next year.

Here’s a piece of "Free Yatta, Pt. 2," one of my favorite song on the album

Yeah, you ain't rockin' VVS's, them is S and I's
Sweet talk a broke b***h out her SSI every time
Fork over the fetti, I need every dime
Every time we slidin', n***as dyin', I ain't never lied
Fingerprints, wipe that thang down, make sure it's sanitized
100K, I used to sit in the trap and just fantasize
Real though, forty with a boulder, that's a dildo
Bobby on the federal papers, that n***a still a go
Broke n***a, f**k you stealing for? I would've put you on
Boogers on the Rollie and we clarifying any stone
Bury blood, you helped carry blood, then you carried on
You ain't double back and set trip, you n***as dead wrong

Listen to Mozzy's "Winning" off the album:

DaBaby started the year as the king of Charlotte and ended as the king of hip hop, stealing the show on everything he touched from his guest appearance on J Cole and Dream Ville’s "Return of the Dreamers" album and his "Breakfast Club" interview to his blowout performance on "Saturday Night Live." DaBaby is the funniest, most energetic act in rap right now, shining a bright light in these dark political times.

"Baby on Baby" was his first studio album of the year, the second was "Kirk," which debuted at No. 1 on the Billboard charts, and could have easily made the list; however, "Baby on Baby" set the tone for the year. Some of my favorite tracks from the album are "Pony," "Tupac,"  "Goin' Baby," and the radio hit "Suge." The video for "Suge" is fire.

Here is a sample of some of the lyrics:

Her boyfriend be hatin' and callin' her groupie
Just 'cause she like all my music (Ha)
She'll send me a text and then delete the message
He tryna find out, it's confusin'
I don't know what these n***as is thinkin' about
Use the brain in your head 'fore you lose it (B***h)
I'll pull up after school and I'll teach her some s**t
Tell your bro I'm a motherf**kin' tutor
'Member I used to cheat off of pretty b***h test
All the teachers, they thought I was stupid (Uh huh)
Was expectin' the box to pull up on the truck
Man, this n***a pulled up on a scooter

I fell blessed to live long enough to see the days of hip hop being an all boys' club coming to an end. Megan the Stallion and Cardi have been owned 2018 and 2019, but Rapsody, who performed for Salon in 2017, is the most talented artist I’ve heard in the last five years. She embodies everything a perfect emcee should have  – from timing, delivery, lyrical content, and style to the ability to flow crazy on a beat or drop classic complete songs. Her second album "Laila’s Wisdom" shocked the industry in 2017, and now "Eve" has secured her space as a lyrical genius and icon.

Every song on "Eve" is named after a powerful influential black woman; some of my favorite tracks are "Aliyah," "Serena," "Tyra," and "Oprah."

Here’s a piece of the epic "Cleo":

Pondering, pondering, how to approach
Some of y'all sensitive, but y'all still need to know (yeah)
Wonder how a bunch of sheep can have opinions on a goat (how)
We all on the same continent and off the same boat (right)
Remember early on, y'all ain't treat me all the same though (uh huh)
Used to question why the brothers even rocked wit' me for (uh)
'Member y'all wonder, used to wonder 'bout Wonder
Question why they ever wanna push a black woman
N***as on my label who ain't want me in the front, and
Some sisters in the industry, y'all know y'all was frontin' (I know it)
Dress too tomboy, rap too lyrical (you said it)
I could save 'em all the pain and bring a few tears to you (huh)
I shared a few with boo back in Fort Lauderdale (uh)
Now I'm boo'd up at boohoo 'cause I didn't fail
Know who you are, I was told names, never tell
The weight that I carried, those summers, I'm never frail
Now they say I ain't elite (who are they?)
On to the next
I don't take time to address opinions that ain't 9th, Dre, or Jay-Z (right)
Only rap radars I need are them and the streets (right)
Be careful, the validations y'all seek (uh huh)
I been in them offices, they don't look like you and me (they don't)
I've been in offices that they look like me
I learned lessons 'bout my essence and this industry (uh)
Y'all banked on the wrong ones, wasted your energy (you did)
Lost more interest, got me laughin' at my enemies
Every door you close, every back you turn (uh huh)
Can't keep me away from the life I earned (you can't keep it)
My rock bottom's good, high life y'all yearn (it is)
What I ain't given I had to take, my turn (gimme that)
Came back, more ammo, like Cleo to burn

Listen to "Oprah" from the album: