House speaker will sit on the articles of impeachment, at least for now. Trump and McConnell are already fuming 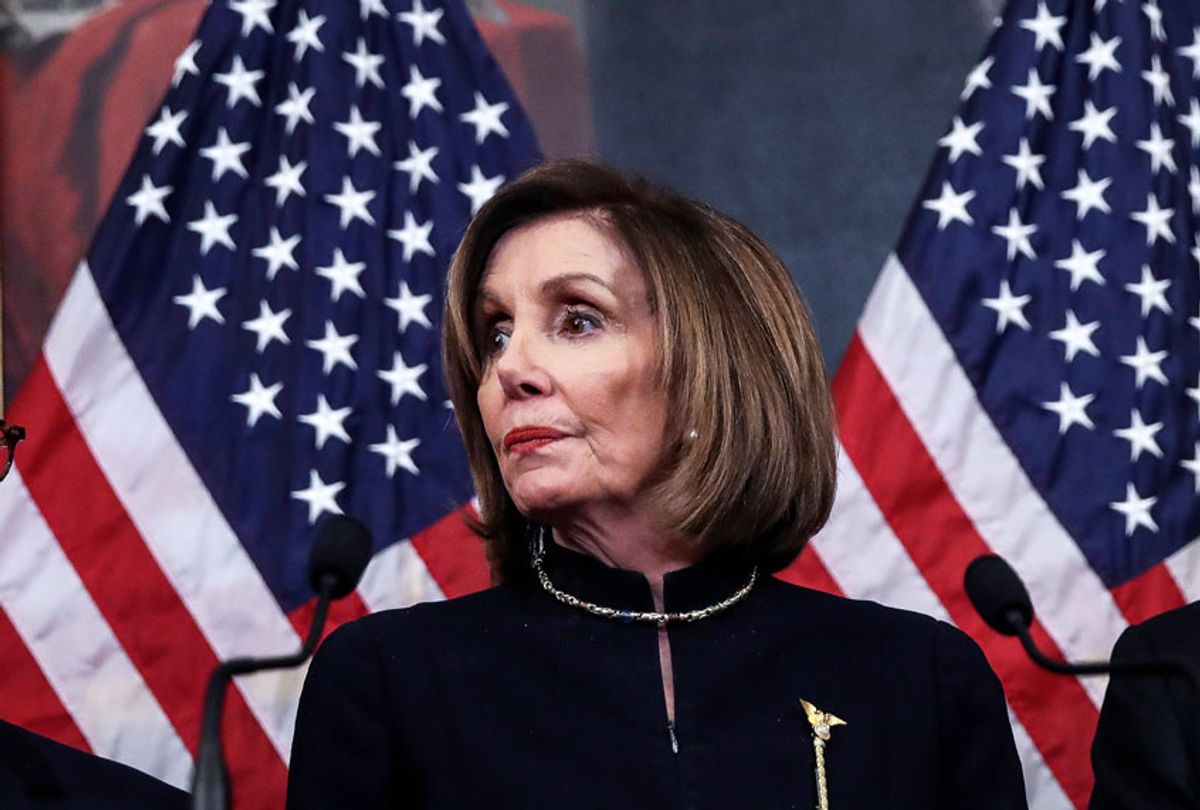 Speaker of the House Nancy Pelosi (D-CA) speaks during a press conference after the House of Representatives voted to impeach President Donald Trump at the U.S. Capitol on December 18, 2019 in Washington, DC. On Wednesday evening, the U.S. House of Representatives voted 230 to 197 and 229 to 198 to impeach President Trump on two articles of impeachment charging him with abuse of power and obstruction of Congress. (Drew Angerer/Getty Images)
--

For all the hand-wringing I and many others have done over the past couple of months over the House leadership's impeachment strategy, its implementation went very smoothly. Traditionally, Democrats have always had a rather large contingent of right-leaning members who inevitably cause trouble in these partisan battles. At the very least I would have expected some public hemming and hawing from showboaters, if only for the camera time it would have given them.

None of that happened this week, at least not by the Democrats. (The Republicans behaved like boorish adolescents through much of it, whining, bullying and yelling. That's just how they are.) Hawaii Rep. Tulsi Gabbard voted "present" for reasons nobody really understands, so the only Democrats to break ranks were the last of the old-time Blue Dogs, Rep. Collin Peterson of Minnesota and the party-switching Rep. Jeff Van Drew of New Jersey, who appeared with Donald Trump at the White House on Thursday and literally declared his "undying support" for the president.

Considering how conservative and buttoned-up Speaker Nancy Pelosi has been about this whole thing — keeping the charges narrowly focused on Ukraine, and resisting every attempt to include Robert Mueller's material or the emoluments violations in the impeachment inquiry — it came as something of a shock on Wednesday night when she abruptly announced that she would not name House managers for a trial or send the articles of impeachment to the Senate until she knew how that body planned to proceed.

It was an unexpectedly bold power play, upending what Majority Leader Mitch McConnell and his lieutenants had hoped to turn into a dull, perfunctory affair in order to spare their vulnerable swing-state Republican incumbents as much damage as possible. They know that holding a real trial with witnesses could be disastrous, and they have been fighting both the Democratic leadership and the White House on that point.

Democrats believe that questioning more witnesses to the events over which the president has been impeached is necessary to fully try their case.  And they have the American people behind them.

A poll released Tuesday by ABC News and The Washington Post found that about 7 in 10 Americans think the administration officials should be able to testify. In an example of bipartisan agreement, 79% of Democrats, 64% of Republicans and 72% of independents agree that Trump should allow them to appear in a Senate trial in the likely event that the House votes to impeach him.

This is not one of those lopsided issues. Even the vast majority of Republicans want to see these witnesses. Those vulnerable senators are going to have to explain why they don't think they are necessary.

Trump also wants to stage a full trial because he believes that what he did was perfect and wants "total exoneration" on TV. I have speculated before that McConnell and Sen. Lindsey Graham, chair of the Judiciary Committee, may have been massaging him with the promise of a big show investigation after the trial is over, where they'll call Rudy Giuliani and Hunter Biden and the CrowdStrike guy and anyone else he wants to air out his Ukraine conspiracy theory for the whole world to see. (Who knows if they would actually go through with it. )

But one thing is clear. McConnell thought he had the president all settled down and ready to accept a quick and dirty trial, and now Pelosi has gotten him all riled up again. He started tweeting out his usual ignorance of the law and the Constitution immediately, undoubtedly misinformed by someone on Fox News:

It is not the Senate's call. There are opinions being floated all over the place as to whether Pelosi is wise to do this and whether or not the process requires her to transmit articles of impeachment to the Senate. Martin Longman at the Washington Monthly helpfully explains the process, which is actually vague in a number of ways. But it seems clear that the decision about when to send articles to the Senate lies with the House.

In any case, that is what Pelosi doing, and there's really no process by which to litigate that point. The real question is why. I suspect the answer she has given is certainly part of it: She wants to know what the rules of a Senate trial will be before she puts together a team to prosecute the case. That's not unreasonable. But mostly this is leverage to get McConnell to allow witnesses to appear, specifically the ones that Minority Leader Chuck Schumer proposed last week. These are people who can corroborate the witnesses we heard from in the hearings because they were in the room with President Trump and followed his orders. You can see why McConnell does not want them to appear. But Pelosi has that huge majority of public opinion behind her.

McConnell and the rest of the GOP leadership have another reason they want to get this over with as soon as possible. I have mentioned earlier that Republican senators might want to think twice about voting to exonerate Trump, given the ongoing suspect behavior of Rudy Giuliani and this week's revelations about his accomplice and/or client Lev Parnas — now under indictment in New York — reportedly receiving large sums of money from Russia. The last thing they want is for this stuff to rise to the surface while the House sits on articles of impeachment.

Republicans are clearly worried about all this. Graham told CNN on Thursday:

I don’t know what Rudy’s got, but I’m going to send him a letter. If you’re going to go on national television and tell the country that you’ve found evidence of a cover-up, then I hope you know what you’re talking about. I like Rudy a lot but we’re going to have to watch what we say. If he comes, you gotta be willing to ask questions about your conduct ... it’s just not good for the country to make these accusations on cable television without them being tested.

I don't know about you, but that sounded to me like a message for Rudy to keep his mouth shut.

To add to these worries the Washington Post published a big scoop on Thursday evening in which several former senior White House officials say that Trump got this Ukraine conspiracy theory about the 2016 election directly from Vladimir Putin during their private meetings. Putin himself expressed support for Trump in his time of need, and it's really not a good look.

It's unlikely Pelosi will hold on to the articles of impeachment very long. But while she does, McConnell will be on pins and needles and Trump is likely to lose patience and start demanding his big exoneration pageant. Who knows what other Ukrainian and Russian shoes are going to drop in the meantime? It looks like 2020 is going to start off with a bang.