Trump must remain in power to stay out of prison: Watch what he does after Senate acquits him

We're about to get Trump squared: He'll triple down on trying to steal the election after the Senate lets him off 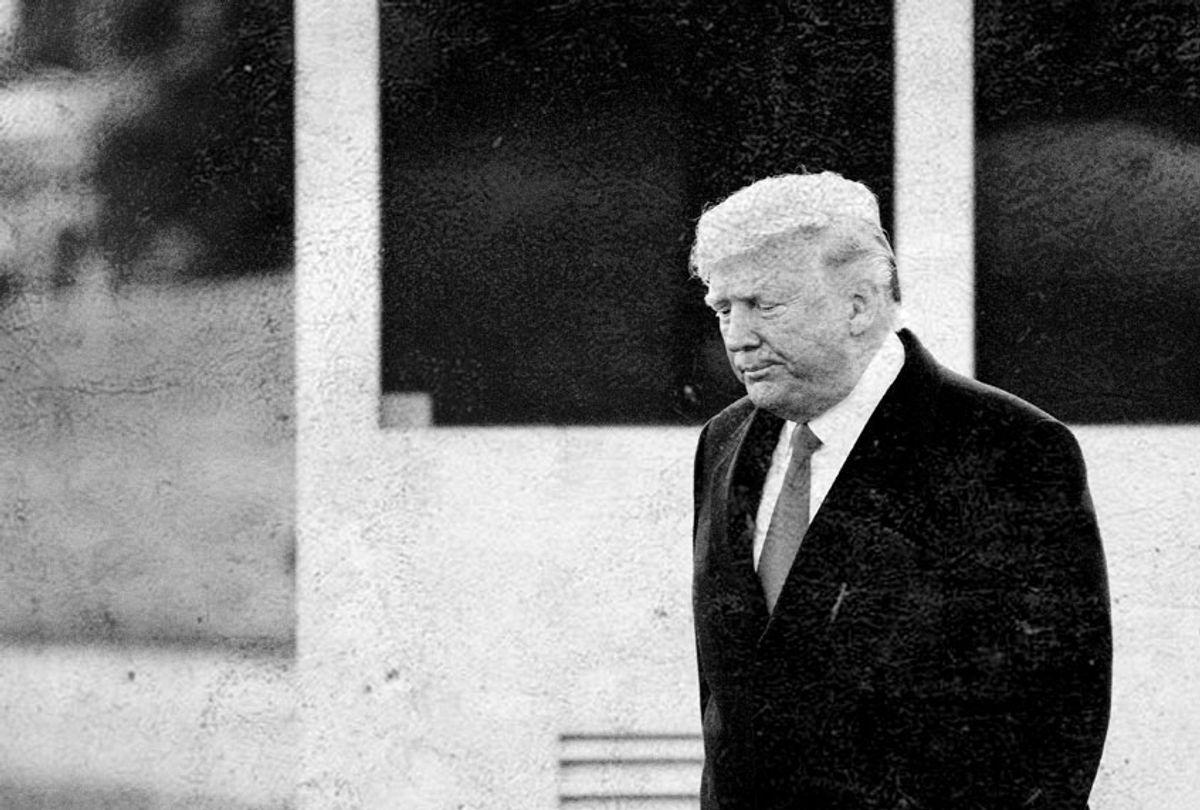 The danger of impeaching Trump without removing him from office has always been that we will have blown the last “check” we have on him. When the Senate lets him off without even a slap on the wrist, Trump will be even more unrestrained than ever. Steel yourself. We’re about to get Donald Trump squared.

The last time he felt he’d gotten away with his crimes was when special counsel Robert Mueller failed to find evidence of a conspiracy between Trump’s campaign and the Russians during the 2016 election. Less than 24 hours after Mueller lamely testified as much to Congress, an apparently giddy Trump picked up the phone and called Ukrainian President Volodymyr Zelensky and tried to get yet another foreign leader to help him steal an election. He offered Zelensky a bribe to get him to investigate his likely opponent in 2020, Joe Biden, and tried to strong-arm Zelensky into making Ukraine the scapegoat for the 2016 Russian hacking of Democratic emails.

He won’t be able to stop himself from doing it again. He’s not going to stop at doubling down. He’ll triple down on everything he’s pulled over the last four years.

He’s going to call Putin and promise to lift the sanctions if he chips in to get him re-elected. He’ll call Recep Tayyip Erdogan, the president of Turkey. He’ll talk to President Andrej Duda of Poland. He’ll reach out for help from every wannabe Mussolini from South America to Singapore. And he’ll get it. They’ll find ways to slip him money under the table. They’ll turn loose hit squads of trolls to infect American social media with campaign propaganda.

He’s going to put the full weight of his Department of Justice behind efforts to suppress the votes of poor people, young people, blacks, Latinos, women, the LGBTQ community — in fact anyone likely to vote Democratic. He’ll call for “investigations” of every Democratic presidential candidate who’s going up in the polls and announce he’s got “dirt” on every one of them. He’s going to unleash an army of surrogate liars to spread falsehoods about his opponent. He’s going to go from one rally a week to two to three; maybe he’ll hold a rally every other night. He’s going to turn Air Force One into an airborne criminal command post.

Donald Trump is the O.J. of American politics. He murdered American democracy, and his search for the “real killer” produced a villain: Joe Biden.

Trump has been daring the Democrats to impeach him since the day he took office — hell, since the day he was elected. Remember all those Trump Tower meetings with Russians during the transition? Flynn’s phone calls with Ambassador Sergey Kislyak, the ones he lied about to the FBI? The tsunami of lies that came out of Trump’s mouth at his first formal press conference? Every time he talks to the press on the White House lawn? His insane clown tweets? Firing James Comey and then bragging about it to Kislyak and Russian Foreign Minister Sergey Lavrov in the Oval Office — while giving them top secret information about ISIS we had received from the Israelis?

He’s been practically shouting, “Catch me if you can.” When he gets caught, it’s “What are you gonna do about it?” His Republican backers in the House mimicked Trump’s attitude during the impeachment debate on Wednesday. They didn’t bother arguing that Trump had done nothing wrong. Not one of them stood up for their moment at the mic and defended Trump’s character. They like it that he’s a ruthless, soulless thug. He’s their kind of guy, the Republican president they’ve been waiting for since Ronald Reagan.

Democrats aren’t used to playing for keeps with psycho killers who can’t be bothered to read the rules, much less play by them. That’s why it has taken three years to impeach a president who began committing impeachable offenses during his first few weeks in office.

But now that we’ve gone and done it, and now that the Republican O.J. is going to walk out of the Capitol a free man, what do we do now?

Well, we’d better learn to play hardball and get a pitcher who will throw straight at the batter and knock him out of the box. Playing by gentlemanly rules doesn’t work. This isn’t about our sacred Constitution, or the almighty rule of law, or the solemn duty of the House of Representatives, and stop with the quotes from Federalist 53. At this point, it’s only tangentially about Trump’s crimes. This is about power. Trump and his minions will be utterly unbound in their effort to hold onto power, and we will have to be even more driven to take it from them.

Republicans have taken an openly sick delight in electing Trump. They are proud of him. He’s the perfect avatar of their party. All he cares about — and all his entire party cares about — is power. Impeaching Trump won’t remove him from office, and we’d better get serious about removing him at the ballot box. Republicans — Mitch McConnell, especially — have already shown us what they’ll do with the power they will seize with four more years of Trump. They’ll cram that nightmare down our throats.

They’ve already cut taxes for the wealthy and driven the budget into a hole. They’ve packed the federal courts with the simpering incompetent children of the Republican conservative “revolution” and jammed two yes-men punks onto the Supreme Court in a pure exercise of rank political power. If Trump is re-elected, they’ll strip-mine Social Security, murder Medicare and shred the social safety net, and they won’t stop there. Even as the dead bodies from one mass killing after another pile up in the schools, churches, streets and shopping malls, they’ll remove the few controls states have been able to put on gun ownership. They will turn voting into more of an exercise in futility than it already is. They’ll commit every crime they can to nullify the demographic changes that are on the horizon before new voters will have a chance to save us.

On the day after Trump is set free by the Senate, we will face the most important question in our lifetimes, and the choice has never been clearer. Do we want to live in a free country or in Donald Trump’s fundamentalist, oligarchical, authoritarian nightmare?