Betelgeuse is so dim that Orion has lost his shoulder. If the star explodes, it will be as bright as the full moon 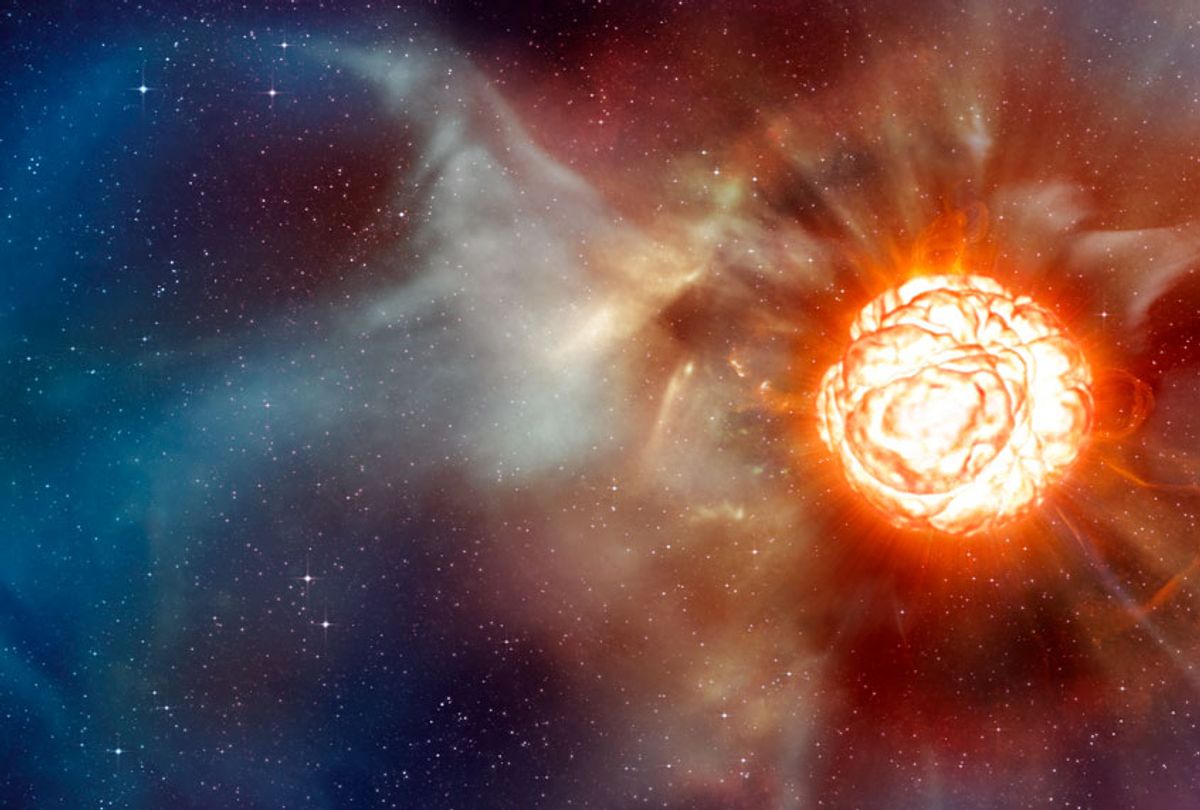 This artist’s impression shows the supergiant star Betelgeuse as it was revealed thanks to different state-of-the-art techniques on ESO’s Very Large Telescope (VLT), which allowed two independent teams of astronomers to obtain the sharpest ever views of the supergiant star Betelgeuse. They show that the star has a vast plume of gas almost as large as our Solar System and a gigantic bubble boiling on its surface. These discoveries provide important clues to help explain how these mammoths shed material at such a tremendous rate. (ESO/L. Calçada)
--

One of the most luminous stars in the sky has been dimming in recent months, fueling some excited speculation that the massive star is fated to explode soon as a powerful supernova, one that would be visible from Earth during the day time.

Dozens of scientists from around the world have taken to social media in recent days to discuss the phenomenon and to ruminate over whether Betelgeuse, the red supergiant on the left side in the constellation of Orion, will go supernova and blast its cache of heavy elements into the galaxy.

The star, also called Alpha Orionis, has variable brightness, meaning that its brightness rises and falls regularly. The variability is tied to energetic rumblings happening deep within the star's body. Some astronomers believe the latest dimming period appears to be a hint that something within may be stirring.

Astronomers from Villanova University reported earlier this month that Betelgeuse is the faintest it has been in 50 years of observation, causing amateur and professional astronomers to speculate that the giant star could go boom relatively "soon." Of course, astronomically speaking, "soon" could mean today, tomorrow, or 100,000 years from now.

"Betelgeuse is dimming, which is an indication that it will go supernova soon — we don't exactly know," said space security expert Dr. Malcolm Davis. "When it happens (it would have actually happened [about] 690 years before we see it on Earth given the star's distance) it will be as bright as the full moon."

Betelgeuse is believed to be between 425 to 700 light years away from Earth, with a mass about 10 to 20 times that of the sun. Its volume is immense, around 1,400 times larger than the sun. If Betelgeuse were at the center of our solar system, in place of the sun, it would instantly swallow all four of the inner planets, including Earth, and possibly even Jupiter. Its luminosity is about 14,000 times brighter than the sun.

Harvard astronomer Avi Loeb told Salon that, luckily, life on Earth wouldn't be affected much if Betelgeuse exploded, adding that such stars typically collapse into neutron stars or black holes.

"In the former case, it will appear as a core collapse supernova whereas in the second case it might produce a gamma-ray burst. But even then, the gamma-rays are collimated in two beams about a few percent of source sky, so we have a small likelihood of lining up with one of those beams," Loeb said.

If a neutron star is created in the aftermath, underground neutrino detectors will observe a "powerful burst of neutrinos lasting tens of seconds," he said.

The last time a nearby supernova was visible from Earth was in 1987. That monster star, known as SN1987A, was located in the Large Magellanic Cloud, about 170,000 light years away, and was visible from the Southern Hemisphere. Since Betelgeuse is a few hundred times closer than the supernova SN1987A, more than one million neutrinos could be detected from its explosion, compared to the tens observed from SN1987A.

The millions of neutrinos that could theoretically emanate from Betelgeuse going supernova would carry "an enormous amount of information about the formation process of the neutron star and its properties," Loeb said, adding that the information that could be gleaned from this neutrino signal would "revolutionize our understanding of supernovae and the collapse dynamics of the cores of their progenitors. They would serve as a very detailed ultrasound taken just before, during and shortly after the birth of a baby."

He noted that we might also detect a "gravitational wave signal" if the collapse "deviates from spherical symmetry and carries a large enough quadruple moment." Taken altogether, "the light, neutrinos and gravitational waves could provide us with the most detailed information on a collapsing star even taken," Loeb said.

The observation of stellar phenomena via multiple observational modes is known as multi-messenger astronomy. Witnessing an astronomical event in all four modes — gravitational, neutrino, electromagnetic radiation and cosmic rays — is considered the holy grail of astronomy.

Science writer Jason Major said that while a supernova explosion is not an immediately likely event, speculating about the idea is like "imagining what you'd do with the money if you won the lottery."

"When Betelgeuse does explode, it'll be a super bright moon-like light in our sky. It'll fade over the course of a few months, but will be a gorgeous spectacle as it does. No danger to Earth — we just get to marvel at its beauty," tweeted Sarafina Nance, an astrophysics graduate student at the University of California, Berkeley.

Physics professor Dr. David Boyce said, "Whatever happens it will be worth watching. A supernova within our galaxy is a once in a lifetime spectacle."