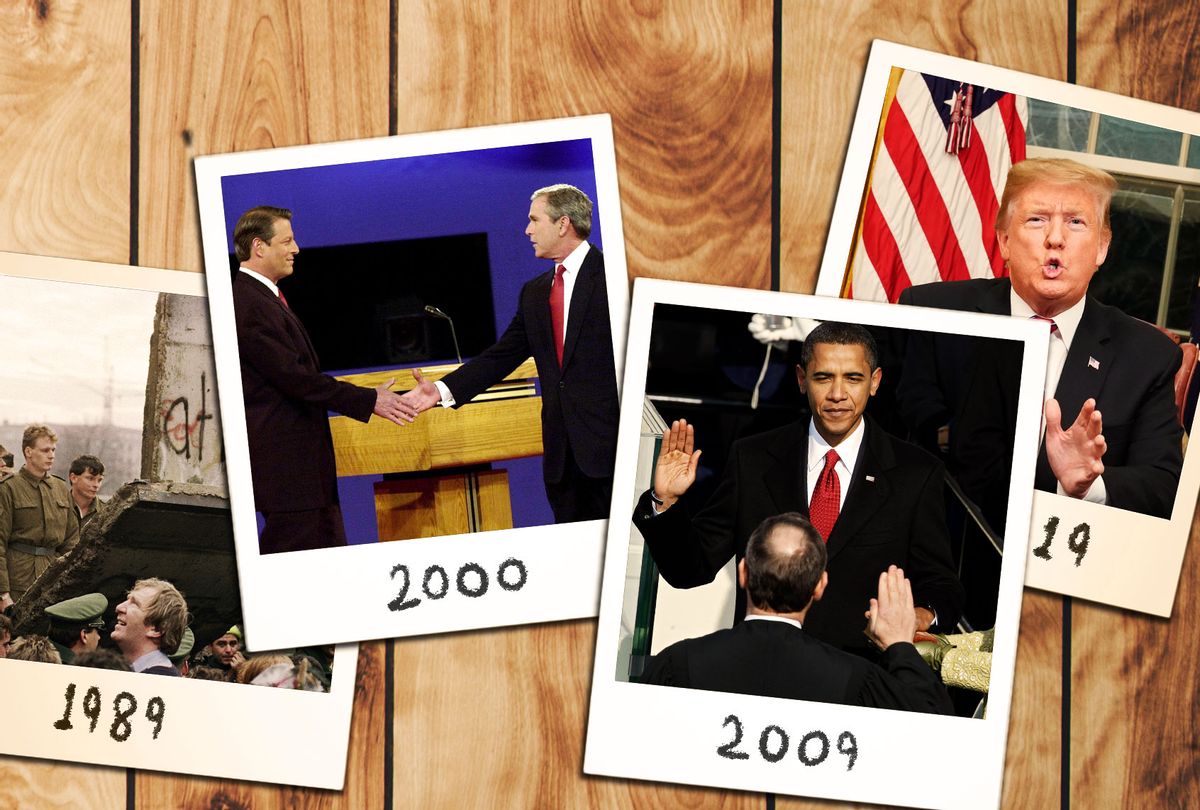 Looking over the endless end-of-decade retrospectives, including those here at Salon, gave me a moment this week to think about the other ends of decades I've witnessed, including one that was momentous simply for also being the end of a millennium. I was still too small to remember anything about 1979, besides perhaps a few flashes of a baby blanket and my pregnant mother, but each of them since then stands out in my memory mostly as a time of hope.

1989: My mother, grandmother, sister and I are in our living room in West Texas, watching MTV (always MTV) and the thrum of excitement is undeniable because it's really happening: The Berlin Wall is coming down. Images of Germans crossing the border for the first time are broadcast around the world. The low-grade, constant fear of nuclear annihilation that had defined not just my childhood, but that of my parents, was crumbling. I'm too young to understand most of it, but I am optimistic.

1999: I'm in a crowd 100,000 strong in Austin, standing together in the streets to welcome the new millennium and also to bear witness if that Y2K disaster really happens. Despite some political rumblings, such as the WTO protests earlier that year, we are feeling calm, carefree and excited for what seemed like a bright future. By this time next year, we're panicking because of the contested presidential election between Al Gore and George W. Bush. Another year later, it will be deep despair because of 9/11 and its aftermath. But that night, we brim with hope.

2009: Party at a rented lake house in Austin, which my partner and I returned to after moving to New York earlier that month. We're in great spirits, despite the still ongoing economic crash. After the chasm that was the Bush years, we have Barack Obama as president and the much-anticipated health care bill is close to passing. We and our friends are all going our separate ways, starting new careers and, for many, new families. A cloud has lifted and we set off fireworks, laughing and dancing and knowing things are going to be just fine.

This recitation of memories is, in one light, a depressing thing. Unlike all these decade turns before, 2019 isn't just bleak, but frightening. The unthinkable has happened: The U.S. elected an actual fascist, and it continues to be an open question whether our crumbling institutions will be able to contain him long enough for our democracy to survive — and since he has the full backing of the Republican Party, things aren't looking great.

But what holds these memories together, besides the dates, is a real sense that history is not fixed — instead, our world can change on a dime, often in ways that we can never expect.

Of course, the '90s felt like a peaceful era that really didn't seem particularly threatened. Things changed so drastically over the next couple of years that 1999 seems almost unreal. We had our personal problems, like everyone, but things like stock market crashes, terrorism threats and war felt like stories from a harder time and nothing we had to worry about. We would soon learn.

But the flip side of this is that things can, without much warning, suddenly get much better. The Bush years felt like they would never end, and while we're still paying the price in many ways, it is undeniable that that terrible time did, eventually, end, and for a few short years there, things really did get better. The Cold War felt  like an immovable fact of life in my childhood, but by the time I was a teen, that era already felt like a distant relic.

Right now, the world is a grim place. We're seeing the rise of an authoritarian nationalist sentiment at home and around the world, fueled in part by the social media technologies that were providing so much hope a few years ago. The American democracy that seemed rock solid for generations is under serious threat. We have an election in 2020, and there's every reason to believe it could be the end of us, either because Trump wins or he loses but decides to invalidate the election somehow to hold onto power (a move that Republicans currently seem prepared to back to the hilt).

And yet, looking over this 30 year block of memories, what sticks out to me is the realization that the future is never certain and that even those things that seem they will never change can shift overnight in unimaginable and unpredictable ways. I challenge anyone reading this to look back over the ends of decades you have witnessed and ask yourself: If you could go back in time and ask yourself in 1989, 1999 or 2009 what the future would holds, wouldn't your then-self would be wildly off in their guesses?

The next year will be hard. If it goes poorly, the next decade might be unimaginably terrible. We could be looking at the end of democracy as we know it. No one should underestimate that threat.

But take comfort in the fact that there's really no way to know how things will unspool, especially given the chaotic nature of our current times. Trumpism is powerful, but the majority of Americans oppose it — and history has shown, time and again, that such popular sentiment cannot be contained. Ultimately it will spill over and cause change, even when those in power aren't expecting it. We just have to keep doing the right thing and pulling in the right direction, and — who knows? Maybe something, somewhere, will break and our opportunity to take this country back will present itself.

The chaos of our times is frightening. But it also means that nothing is set in stone. That alone is reason not to give into despair and to enter the next decade with a sense of guarded hope and realism, but most of all with determination. Because the only thing that's certain is uncertainty.