Recreating my mother's recipe in a new home. 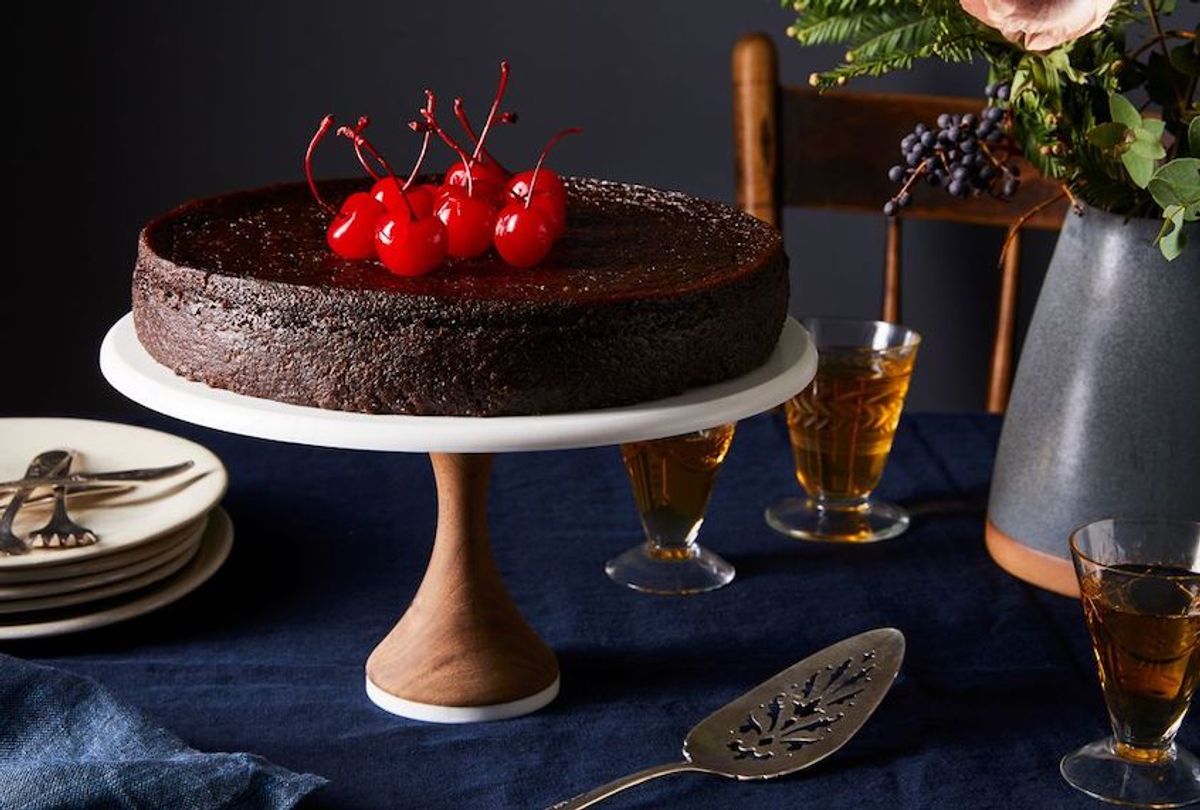 “You should have started months ago. You remember. This is a cake that requires your attention, your respect and, most importantly, your time.”

These were my mother’s parting words to me when I told her of my attempt to make the most ubiquitous holiday dessert throughout the English-speaking Caribbean: black cake.

My mother’s chide wasn’t so much an “I told you so,” but more of a “you know better.” She was right. I knew better. After all, I’d spent the better part of my childhood in Trinidad and Tobago watching her prepare this cake the moment hurricane season ended, usually around early October.

It was already December. But I was a heady newlywed and wanted my first Christmas with my husband to be memorable. I reasoned, what better way to mark the year than to give my Jamaican husband, Joseph, a baked gesture symbolic of our shared history as West Indian immigrants? Black cake was the clear choice; however, the process of making it was a little more daunting.

In the Caribbean, there is nothing else quite akin to black cake. It’s a cake that beats with a rhythm that only the islands could produce. All the elements that the process of baking has ever prized—patience, decadence, and intrigue—are set within black cake’s dark, rich, and historic interior.

Months before Dec. 25, hundreds of thousands of home cooks throughout the Caribbean combine pounds of raisins, dried cherries, currants, and prunes, and subsequently drown them in a boozy bath of local rum and fruit-forward brandy. This dried fruit—saturated in liquor—is then pulverized to a smooth paste that gives black cake its remarkably moist texture. This ground fruit also rids the cake of the dense, stone-like chunks that afflict many versions of fruit cake. The color (from which its name derives) is attributed to the addition of burnt sugar essence, or browning, which is the last ingredient added to the batter. And while there are myriad tweaks and tricks to this recipe, black cake will always retain its relevancy from the backwaters of Caribbean history.

The cake is a descendant of colonial British plum pudding. The ingredients—brown sugar, rum, and browning—are culinary guideposts reminiscent of an age when the economic priority of sugar, powered by the ills of slavery, anchored British interest in the West Indies. As such this cake embodies two extremes: labor and luxury. For Joseph and me, battling the pangs of homesickness and making this cake was a connection to the warmth of the Caribbean’s care-free vibes—especially during the dead of an American winter.

Sourcing the dried fruit was simple. Sourcing the cherry brandy, on the other hand, required some diligence; ultimately, I found a capable substitute in the kosher grape wine, Manischewitz. By the time I had combined the two, my husband knew what was happening: It’s impossible to mask the aroma of dried fruit baptized in booze. For a couple days, Joseph tiptoed around the topic of black cake, until one day, when he asked very nonchalantly, “What’s on the Christmas dessert menu?” I knew what he was getting at. I detected a distinct note of concern in his strong, sing-song voice. He was gentle enough to spare the judgment that I was woefully late to the black cake game.

“Growing up, black cake was the biggest part of Christmas,” he said, with a faraway smile. “We gave it away as presents to close friends and family members. I remember my parents talking about how much all the rum, fruit, and ingredients cost, so I knew that to receive one as a gift truly meant something.” And with his words, I knew that my undertaking would be worth it.

Joseph went on to tell me of the massive, airtight, covered blue water bucket his family used to store and soak the dried-fruits drenched in alcohol, because no kitchen bowl was ever ample enough. His eyes widened as I watched his childhood memories of making black cake come to life through his storytelling.

But the biggest surprise and shock to my system was my husband’s quip, which foreshadowed what I thought would be my sure failure. And for any Caribbean native who has ever made this cake: to fail at black cake was to fail at Christmas.

“You know, for some Caribbean women, the real measure of Christmas is how long they’ve been soaking their fruit,” he said with ease.

Immediately, I looked at my pitiable four-quart Pyrex bowl that brimmed with one-week-old Bacardi white rum, Manischewitz, and dried fruit with chaos. Clearing my voice and regaining mental composure, I asked how long his family typically soaked their fruits.

“Honestly, mum had that big blue water bucket for years with fruits soaking up all the goodness,” he recalled. “She’d top it up with Appleton rum and stir it around every so often. I think the age of the fruits is what made our Black Cake so good.”

At this point, I was searching on Etsy for “three-year-old alcohol-soaked fruit for black cake.” My search was a dud. I’d hit Caribbean Christmas rock bottom.

With a soccer ball under his arm, Joseph gave me a quick kiss on the forehead and headed out for his weekly pickup game.

The second the door turned, I felt near-lethal levels of regret rise within me. I knew there was no way my last-minute cake with non-Jamaican rum could ever compare to his mother’s. My regret grew into low-grade rage, which then settled into discouragement. And so, I escaped. I poured myself a glass of red wine and took a nap. When I awoke, I did the only thing I knew to do when I was in trouble: call home and ask for help. Turns out, even in my late twenties, married with a mortgage, I still had a sizeable part of teenage girl buried deep within.

My mom answered and heard the undue desperation in my voice. And she met me with life-giving, Christmas-cake saving advice.

“Add some Angostura bitters to your fruit mix, along with some mixed citrus peel,” Mum said. “And keep your fruit-mixture room temperature with a tight-fitting lid.” The steadiness in her voice cut the urgency in mine. “Don’t worry, dear. You were at my side, year after year making this cake. It will come back to you.”

I thanked my mother and followed her instructions. Yet still, I was anxious and consistently doubted my experience, even though I’ve been a black cake onlooker for well over a decade.

In the weeks that followed, I gained my footing. Five days before Christmas, I began the process of baking the cake. I took off work that day and by mid-morning I’d gathered all of my utensils. I uncovered the glass bowl containing my soaked-fruit and was impressed by the aromas reminiscent of my childhood Christmas on the island. Working in small batches —just as my mother did, and her mother before her—I pulverized the fruits. Making the browning came next, followed by the creaming of soft butter with dark brown sugar. With each passing step, I gained confidence that I could actually pull this off. Before I knew it, I was sliding two round cake pans into the oven.

Throughout the entire process, I waited for the mistake, the misstep, or the inevitable jinx that would’ve made the whole endeavor a hapless undertaking. But it never came. Not because I’m a skilled baker, but because of the power of my childhood memories that carried me along. No longer an onlooker, I was now a participant and witness to the intergenerational transmission of this key part of our Caribbean heritage.

When I pulled the black cakes out of the oven—moist and shamelessly decadent—I also extracted the knowledge that this cake was never meant to be exactly like my mother’s or my mother-in-law’s, because in this cake I’d started a new tradition, Manischewitz wine and all.

“This looks just like my mom’s, but there’s something different in the taste,” Joseph said, taking another bite. “A good kind of different.”

Directions
1. In a large, air-tight container combine the prunes, raisins, currants, cherries, and citrus peel, all of the brandy, and 3 cups of the rum. Stir to combine and set aside for at least three days and up 3 months.

2. When ready to bake, working in batches, place the alcohol saturated fruit in a food processor. Slowly pulse to a rough paste, ensuring that some of the fruit remains somewhat intact. If needed, add more brandy to thin the consistency. Continue this process until all of the fruit has been processed. Set aside.

3. Next make the "browning." In a heavy-bottomed pot over medium high heat, add the granulated sugar and stir with a wooden spoon until it has melted. Continue stirring until the sugar darkens. It will indeed smoke. Don’t panic. When the sugar is almost black, carefully stir in the boiling water. Take caution, because it will splatter. Turn off heat.

4. Prepare cake pans with butter and a double layer of parchment paper. Preheat oven to 250°F. (Note: Because this cake is so dense, it seldom rises. As such, employing relatively shallow baking pans are necessary).

5. In a stand mixer or by hand, cream the butter and brown sugar until fluffy aerated. One at time, combine the eggs, then the lime zest, essences, and bitters. Transfer this mixture to a very large bowl. Then, in a separate bowl combine the dry ingredients: flour, baking powder, cinnamon and nutmeg. Gently fold the dry ingredients into the butter mixture. Stir in the fruit and a 1/4 cup of the browning. The batter should be dark brown; if it's too light add in more of the browning, a tablespoon at a time.

6. Divide batter among prepared cake pans. The batter will not rise very much, so fill pans a hair off the top. Bake for one hour, then reduce heat to 225°F. Continue to bake for 2 1/2 to 3 hours longer. Check for completion using a tester, which when inserted should come out clean. Allow the cakes to cool on a wire rack.

7. 10 minutes after the cakes have been retrieved from the oven, and they are cooling on the wire rack, brush the top of the cakes with more rum and allow it to soak in. Continue this process about every 30 minutes while the cakes cool.

8. The cakes can be served one small slice at a time, as is custom in the Caribbean. To store, wrap them in wax paper first, then wrap in foil. These cakes keep for up to a month in a cool dry place.