The actress gives an Oscar-worthy performance in Chinonye Chukwu's somber meditation on life, hope, and despair 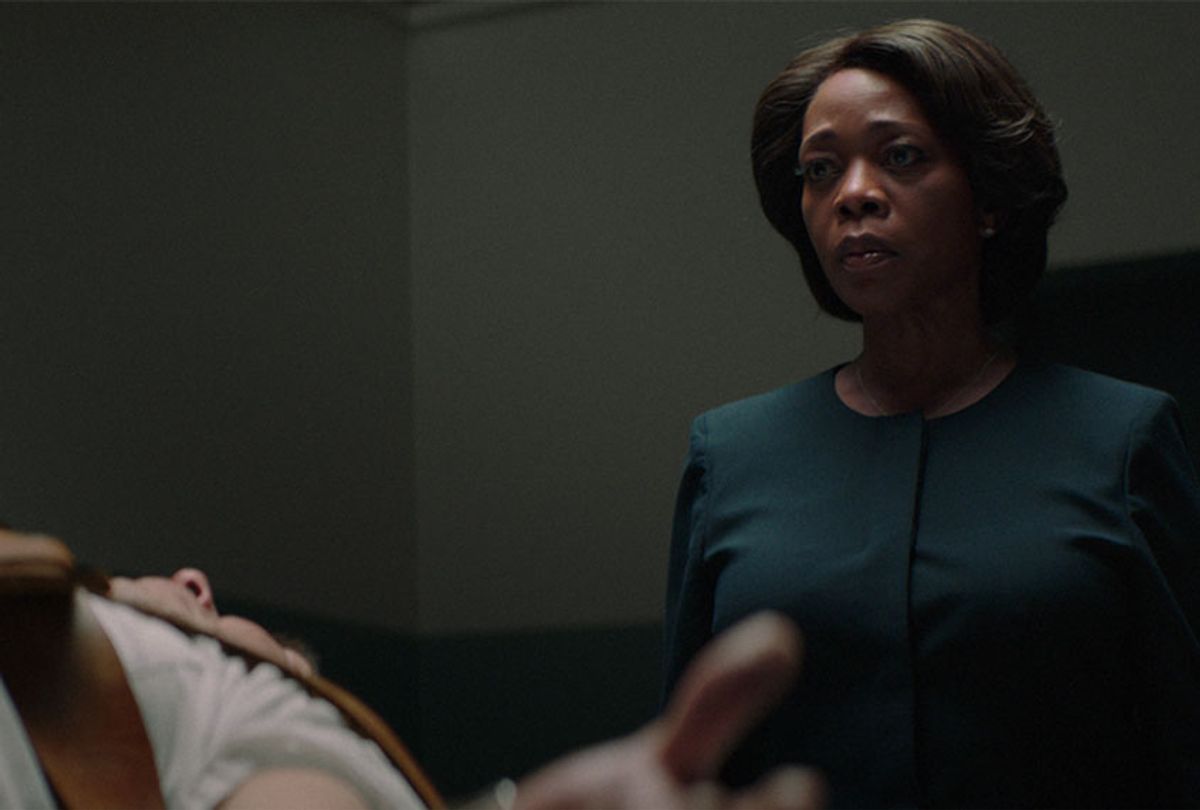 In the pre-title sequence of “Clemency,” Chinonye Chukwu’s feel-bad character study, Warden Bernadine Williams (Alfre Woodard) stares into the room at the gurney where lethal injections are carried out in her prison. Bernadine is obviously haunted not just by what she sees, but what she has seen over her years as warden, and that agony informs her every decision.

Woodard gives an Oscar-worthy performance here, often expressing so much despair without saying a word. There is an incredible moment at a dinner with her husband, Jonathan (Wendell Pierce), where she reacts to one of his many impassioned pleas for them to “be whole again,” and Woodard just processes this request with her eyes and mouth as she tries to find an appropriate way to respond.

Equally remarkable is the film’s final sequence, an astonishing five minutes of Bernadine’s silent reaction to a climactic moment. Filmed with very few edits, the camera concentrates almost entirely on Woodard’s face as she has an emotional catharsis. The actress’ performance is breathtaking.

Bernadine, the film suggests, is not just in a prison of her own making — her commitment to her job consumes her — but she has placed herself in solitary confinement. “I am alone, and nobody can fix it,” she expresses this in a raw, vulnerable moment that will rip right through viewers.

Bernadine finds it difficult to interact or engage with others except on a professional level. (She has trouble sleeping and takes to watching TV on the couch, much to her husband’s chagrin). Bernadine may be stony and stunted emotionally, but Woodard’s performance captures a woman whose pain is long suppressed and percolating just below the surface.
“Clemency” is distressing, but the film will also generate empathy for its consideration of the death penalty. The film’s opening segment has Williams overseeing the difficult execution of Victor Jimenez (Alex Castillo), which goes badly. The incident has ripple effects for the warden and her staff.

While Williams insists on following protocol to maintain order at work, she is losing or has lost control in other areas of her life. She copes by getting drunk one night at a local bar with Deputy Warden Thomas Morgan (Richard Gunn) and insists she does a “Goddamn good job.” He takes her keys because Bernadine is too impaired to drive. She has nightmares about the botched execution and imagines herself on the gurney with Victor standing over her. She also becomes more estranged from her husband, who tries to woo her one special night, only to be rebuffed when he raises the idea that they both retire. She barks back that she has a profession, not a job, demanding respect for the difficult work she does. (Jonathan is a high school teacher and is shown teaching “Invisible Man” in a scene that feels both apt and a bit on-the-nose.)

“Clemency” focuses much of its drama on how Williams interacts with the latest inmate to be given an execution date, Anthony Woods (Aldis Hodge). Woods has served 15 years for robbery and killing a cop, and his attorney, Marty Lumetta (Richard Schiff), is hoping to get clemency from the governor. Lumetta hopes to prove Woods is innocent of the murder, and media sound bites throughout the film chronicle his efforts.

The scenes between Williams and Woods are wrenching. When she recounts how the execution will unfold, he sits in his cell, emotionless until tears start streaming down his face. Another exchange has Bernadine discussing Woods’ options for a last meal. It yields silences freighted with meaning. Chukwu wrings heartbreaking emotions from these scenes that are as difficult to watch as an episode where Woods violently bangs his head against his cell wall in a suicide attempt.

The film is relentlessly downbeat and stagy — it could easily be mounted in a theater — but there are several powerful exchanges. One involves Woods meeting with Evette (Danielle Brooks), the mother of his child, for a talk that leaves both of them devastated. Likewise, as Lumetta discusses his impending retirement, he mentions that his job is for him to get his clients “not to die.” One feels the crushing weight of this in his exchanges with Williams and Woods.

Chukwu is examining the purpose and legacy of a life as all of the characters are all nearing the end of their lives, professionally or physically. But “Clemency” never gets maudlin as it addresses the issue of what have folks done with or made of their lives. Instead, the film’s tone is actually quite chilly. The idea of “being seen and being heard” is expressed in a critical moment that magnifies the characters’ hope and despair.

In support, Schiff and Hodge are both excellent in their roles, and Brooks is superb in her single scene. In addition, Chukwu deftly uses space to inform his characters. A scene of Woods dribbling a basketball in a prison cage that is not much larger than his cell makes the claustrophobia he experiences palpable.

“Clemency” is a somber film. Its power comes less from the drama and more from the arresting performances and the storytelling.