US Embassy compound in Baghdad besieged by protesters after Iraq airstrikes

The protests follow U.S. airstrikes, which killed 24 members of an Iranian-backed militia over the weekend 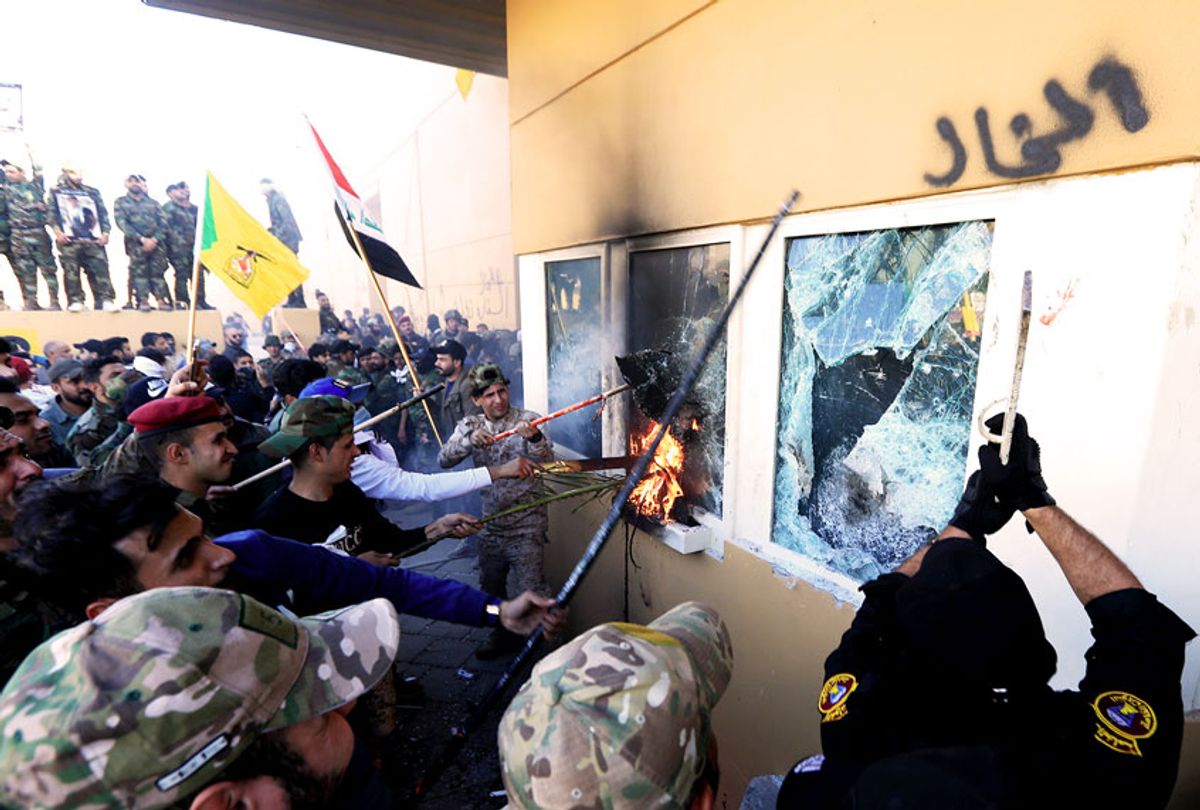 Outraged Iraqi protesters storm the U.S. Embassy in Baghdad, protesting Washington's attacks on armed battalions belong to Iranian-backed Hashd al-Shaabi forces on December 31, 2019. At least 25 people were killed in weekend U.S. airstrikes on positions of Kataib Hezbollah, an Iranian-backed militia group, in Iraq and Syria. Hundreds of Iraqi protesters gathered early Tuesday near the embassy to show their anger at the U.S. move. (Photo by (Murtadha Sudani/Anadolu Agency via Getty Images)
--

Hundreds of protesters stormed into the heavily-guarded compound of the U.S. Embassy in Baghdad on Tuesday, trapping diplomats inside in response to American airstrikes, which killed 24 members of an Iranian-backed militia over the weekend.

U.S. diplomats took refuge in a fortified safe room as guards inside the embassy fired tear gas to try and prevent the invading demonstrators from moving towards the main buildings inside the compound, according to NBC News.

The protesters reportedly shouted "Death to America!" while hurling water bottles, smashing security cameras, throwing rocks and covering the compound's walls with anti-American graffiti. U.S. troops were reportedly seen nearby and on rooftops, their weapons drawn, though they did not open fire. It remains unclear how many Americans are inside the compound.

President Donald Trump responded angrily Tuesday to the storming of the embassy compound, blaming Iran for the siege and stating that he expected protection from Iraq's security forces.

"Iran killed an American contractor, wounding many. We strongly responded, and always will," the president wrote on Twitter. "Now Iran is orchestrating an attack on the U.S. Embassy in Iraq. They will be held fully responsible. In addition, we expect Iraq to use its forces to protect the Embassy, and so notified!"

He added later in a separate tweet, "To those many millions of people in Iraq who want freedom and who don't want to be dominated and controlled by Iran, this is your time!"

Defense Secretary Mark Esper said in a statement, "We are sending additional forces to support our personnel at the embassy. As in all countries, we rely on host nation forces to assist in protection of our personnel in the country, and we call on the government of Iraq to fulfill its international responsibilities to do so."

A spokesman for the Iranian-backed Kataib Hezbollah militia said the protesters intended to besiege the embassy until it shuts down and all U.S. diplomats and troops leave Iraq.

The protests comes after American fighter jets on Sunday bombed weapons storage facilities in Iraq and Syria, which the U.S. said were linked to Kataib Hezbollah. The U.S. blames the group for 11 attacks on Iraqi bases used by the U.S.-led coalition over the past two months. The latest of these came on Friday, when a rocket attack killed a U.S. contractor and injured four other American service members.

The Sunday airstrikes killed about two dozen fighters and were carried out as a retaliation against the group.

Secretary of State Mike Pompeo spoke to Iraqi Prime Minister Adil Abdul-Mahdi and President Barham Salih separately by phone on Tuesday and told them that "the United States will protect and defend its people, who are there to support a sovereign and independent Iraq," State Department spokeswoman Morgan Ortagus said in a statement.

"Both Abdul-Mahdi and Salih assured the Secretary that they took seriously their responsibility for and would guarantee the safety and security of U.S. personnel and property," Ortagus added.

Abdul-Mahdi issued a statement earlier calling on protesters to leave the area around the embassy.

"We ask everyone to immediately leave these places, and we recall that any aggression or harassment of foreign embassies and representations are an act that will be strictly prohibited by the security forces and will be punished by law with the most severe penalties," Abdul-Mahdi said in a statement.