Marbut, the new pick to head federal office of homelessness, has a long history of get-tough policies on the poor 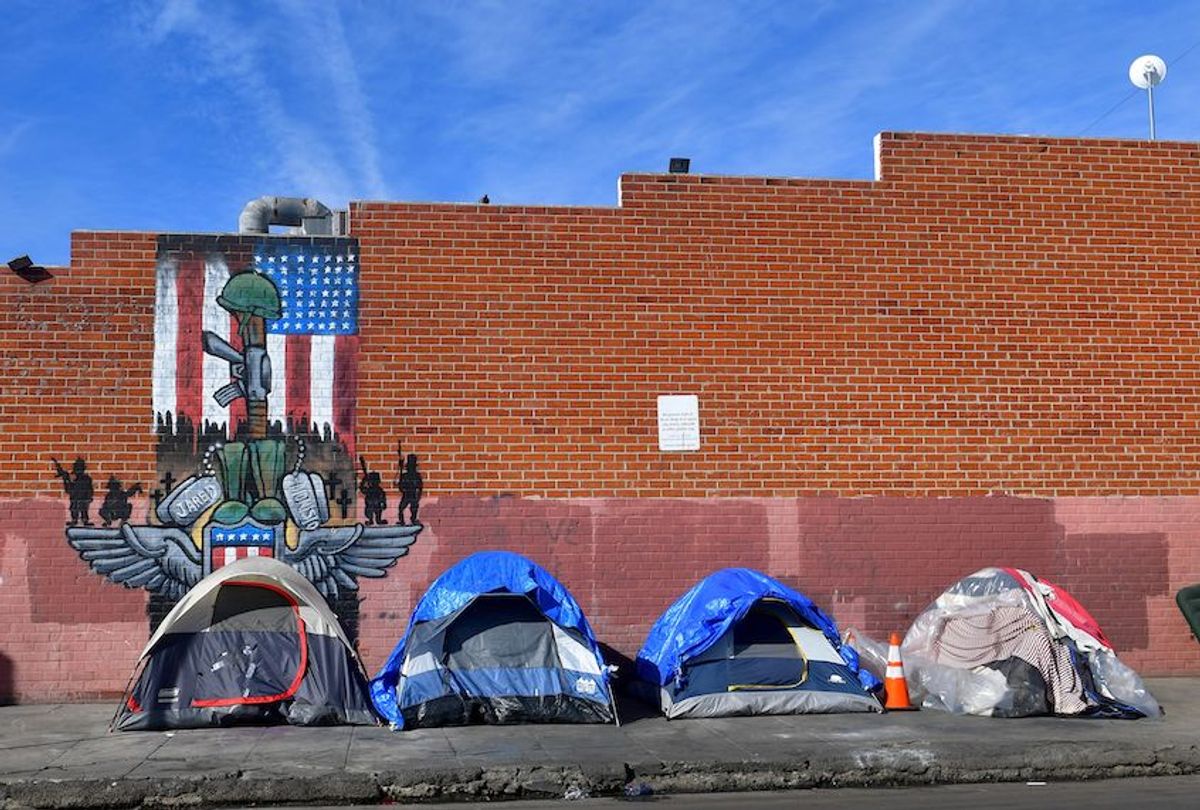 Tents for the homeless line a sidewalk in Los Angeles, California on December 17, 2019. (Frederic J. Brown/AFP via Getty Images)
--

Team Trump is sharpening its teeth on a new, nationwide crackdown on homelessness.

Though the details are not known, we do know a bit about Robert Marbut, who has been named essentially czar for homelessness for the White House. Marbut built a reputation for making the homeless earn admittance to shelters while clearing the streets to gather them in central holding facilities.

Marbut puts emphasis on an approach that is less about empathy and closer to the model we know as jail.

Formally, Marbut was named director of the U.S. Interagency Council on Homelessness (USICH), a position that collaborates on homelessness policy among 19 federal agencies. His appointment was quickly condemned by housing advocates, including the national nonprofit Invisible People, which described Marbut’s past work as “real-life horror.”

Homeless policies are still cooking in the White House, but the details that have emerged suggest an approach heavier on law enforcement than empathy.

Marbut describes himself as wielding a “velvet hammer” toward homelessness to avoid coddling those on the street.

While whatever is emerging as homeless policies is still cooking in the White House, the details that have emerged suggest an approach heavier on law enforcement than empathy, and one generally described as an attack on funds for cities and states that are seen as places where homelessness is most visible.

For sure, homeless populations are growing in this nation–numbers of more than 1.4 million are said to be in various kinds of housing programs, with hundreds of thousands more living on the streets of major cities. Concern and frustration with homelessness as a problem crosses political boundaries, of course.

Donald Trump has been increasingly vocal recently in criticizing cities, particularly Los Angeles and San Francisco, for allowing homelessness to grow as opposed to looking directly into the economic and social causes for rising numbers finding themselves in the street. Trump apparently sees it as good politics to try to embarrass local Democratic officials rather than working to resolve the problems.

In other words, Trump wants to Do Something that makes it look as if homelessness is being contained rather than examine and treat the reasons for its growth. In medical terms, he wants the appearance of cancer going away without treating the disease.

According to Citylab.com, advocates for homeless policy say that they expect an executive order on homelessness to assign new resources to police departments to remove homeless encampments and even strip housing funds from cities that choose to tolerate these encampments. While several approaches are being reviewed by the White House’s Domestic Policy Council and the Department of Housing and Urban Development, the preferred approach is aggressiveness on the streets over attempts to provide housing first.

Advocates say that the government is looking closely at ways to turn former correctional facilities and federal buildings into shelters, a controversial approach backed by  Marbut, who has said he sees “housing fourth” rather than “housing first.”

Citylab notes that Marbut’s career has been marked by controversy. Thirteen years ago, four years as a San Antonio city council member, Marbut oversaw the development of a shelter model for the city in the wake of Hurricane Katrina, when hundreds of thousands of New Orleans residents fled to Texas cities. The downtown facility named Haven for Hope—which calls itself a “transformational campus,” not a shelter—has been praised by state leaders and now accommodates 1,500 people as well as a wide range of services, 24 hours a day. Access to the 1,000 beds must be earned. People entering the shelter must sleep on mats in an outdoor courtyard and can only move inside after participating in services like job training, education and substance abuse counseling. Breaking rules like missing curfew can mean getting demoted back to the courtyard.

Marbut became a paid consultant for other cities. He once disguised himself as homeless to mix with the homeless in Daytona Beach, Fla.

Increasingly, U.S. cities have instead been trying to provide “housing first,” believing that having shelter is a first step toward stabilizing the lives of those on the street, particularly if children are involved. At the same time, they want to address jobs and medical, financial or substance abuse problems. While expensive, building shelters has proved more economical than public spending on emergency care, officials say.

But progress is slow, especially as numbers increase, the result of economic or opiate problems. After years of decline, the population has gone up during the Trump years.

Marbut has recommended that cities stop giving out food, criminalize sidewalk sleeping and force homeless residents who want services to move into city-operated facilities in large temporary structures. Housing and Urban Development Secretary Ben Carson has said housing for homeless residents should not be “a comfortable setting that would make somebody want to say: ‘I’ll just stay here. They will take care of me.’” Carson has moved to end some federal homelessness programs, including protections for transgenders.

In an interview with Huffington Post, Marbut said it is too soon to know what he will recommend. “We’re going to be coming up with new ways to look at and address homelessness,” he said.

The White House Council of Economic Advisers said in a September paper that the “tolerability of sleeping on the street” is an important factor in the prevalence of homelessness in a given town, a factor that could be affected by “the policing of street activities.”

Trump wants to push cities to round up homeless people, having called encampments disgusting and dispatched federal officials to scout out empty facilities across the country to be used as shelters. Ben Carson toured a large Houston shelter last week and previously had looked at an empty federal building in California and an unused jail in Oregon.

Texas Tribune published a profile of Marbut that is worth reading, including his sense that feeding people enables homelessness.

We should remember that there is a pattern in the Trump approach to government to hide away societal problems to make the policies he pursues look better.

This issue is worth public debate.