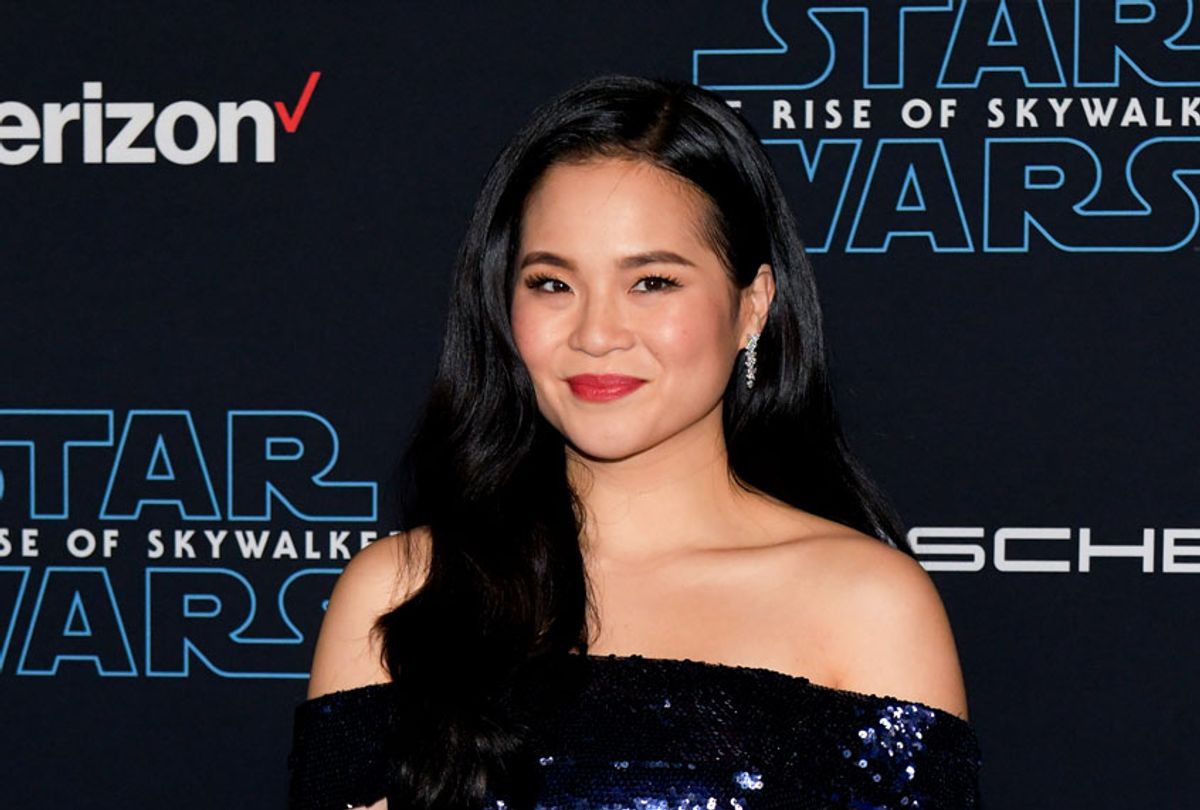 Kelly Marie Tran, the Vietnamese American actress who was on the receiving end of a racist and sexist backlash after co-starring in "Star Wars: The Last Jedi" as Resistance mechanic Rose Tico, recently revealed information that appears to undermine the claim of the "Star Wars: The Rise of Skywalker" co-writer who claimed her role was reduced in that film for technical reasons. The actress addressed yet another meaty scene she had shot that had been cut from the film.

“Yeah, it was probably one of the biggest sets I had ever been on,” Tran told The Hollywood Reporter about the Battle of Exegol, one of the climactic action scenes in "The Rise of Skywalker." “It was incredible to see what the stunt teams did. It was also insane to be running across this platform — which I know you only see for a second in the movie — but we shot it so many times. I remember having bruises on my knees the next day because we kept running and then we would fall onto our knees and do some more shooting stuff. I don’t think that’s in the movie. It was definitely organized chaos as stormtroopers were flying, people were on horses.  . . .  It was pretty insane.”

This is not the first time that Tran alluded to a scene involving Rose Tico that was filmed for "The Rise of Skywalker" but did not make the ultimate cut. In an interview with Entertainment Weekly in November, Tran alluded to scenes that she supposedly shared with this trilogy's new Jedi knight Rey (Daisy Ridley), even though none of their scenes together made the final cut.

"I think it’s really cool at all that they are even in scenes together because in ‘[The Last Jedi]’ we weren’t in any scenes together," Tran told EW. "It was really cool to have feminine energy on set. I wish I could tell you more but I’m really excited for people to see [Rose and Rey] interact. They both have the some objective which is to fight for the things you believe in and the people you love."

Neither of these scenes involve Rose's interactions with Leia, which undercuts a recent claim made by Chris Terrio, who co-wrote the screenplay for "The Rise of Skywalker," in which he argued that part of the reason her role had been reduced was that it was difficult to attain photorealism in the scenes where Rose would interact with the late Carrie Fisher as General Leia Organa after the actress' death in 2016.

"One of the reasons that Rose has a few less scenes than we would like her to have has to do with the difficulty of using Carrie’s footage in the way we wanted to," Terrio told Awards Daily in an interview published earlier this week. "We wanted Rose to be the anchor at the rebel base who was with Leia. We thought we couldn’t leave Leia at the base without any of the principals who we love, so Leia and Rose were working together. As the process evolved, a few scenes we’d written with Rose and Leia turned out to not meet the standard of photorealism that we’d hoped for. Those scenes unfortunately fell out of the film."

He added, "The last thing we were doing was deliberately trying to sideline Rose. We adore the character, and we adore Kelly – so much so that we anchored her with our favorite person in this galaxy, General Leia."

While it is possible that there were other reasons for Tran's scenes without Fisher to be cut, no explanation has been provided. As the "Star Wars" writers continue to reel from the backlash of the #RoseTicoDeservedBetter movement, there has been a paucity of explanations that can convincingly disprove the suspicion that the creators of "The Rise of Skywalker" were caving to racist and sexist backlash against the character. Although "The Last Jedi" was unpopular for a number of reasons, a segment of the fanbase expressed resentment toward having a Vietnamese American actress play one of the major characters. Last year, this prompted Tran to write an editorial for The New York Times saying "this is what it is to grow up as a person of color in a white-dominated world. This is what it is to be a woman in a society that has taught its daughters that we are worthy of love only if we are deemed attractive by its sons. This is the world I grew up in, but not the world I want to leave behind."

She concluded, "You might know me as Kelly. I am the first woman of color to have a leading role in a 'Star Wars' movie. I am the first Asian woman to appear on the cover of Vanity Fair. My real name is Loan. And I am just getting started."

The reduction of Rose Tico's role is only one of the criticisms made of "The Rise of Skywalker." As this author noted in his review, a subplot involving Finn admitting something to Rey was arbitrarily dropped (one rumor holds that he was going to tell Rey that he was Force-sensitive) and there were scenes where characters were a bit too on the nose in catching audiences up on the exposition. The movie was also criticized for trying to jam in too many plot developments at once and for introducing new characters  –  such as the alien droidsmith Babu Frik,  Kerri Russell's helmeted spice smuggler Zorii Bliss, and Naomi Ackie's Freedom fighter Jannah – rather than tying up the plot threads of existing ones in a substantial way.

None of those flaws, though, are as serious as sidelining Rose Tico. Not only was she a major character in "The Last Jedi" and thus deserved to have a satisfying resolution to her character arc, but the more Terrio and others associated with the film fail to adequately explain why her role was reduced, the more it appears that they were indeed bowing to racist and sexist fanboy pressure.