Here's the big question: How does Trump personally benefit from war with Iran?

Trump's only motivations are ego and self-interest. Escalating this massively dangerous clash with Iran serves both 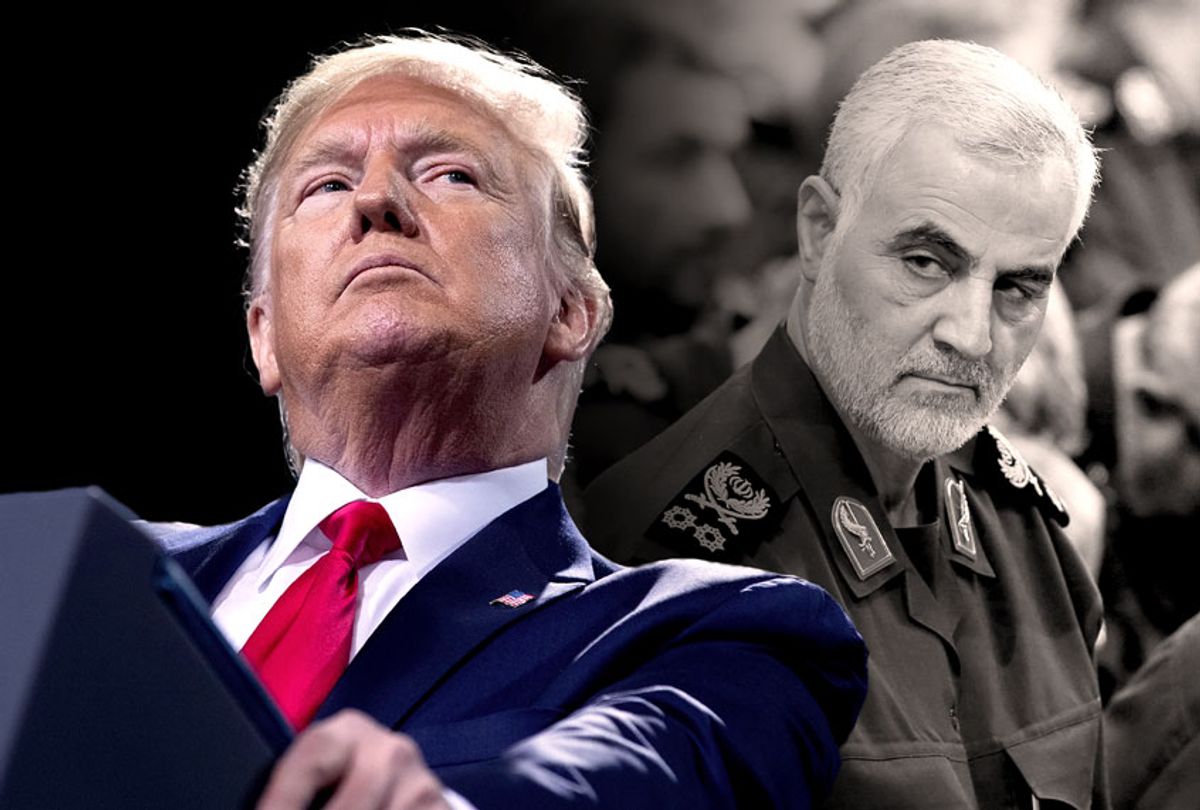 When my phone screen flashed Thursday night with a notification that an American air strike had killed Maj. Gen. Qasem Soleimani, a top Iranian military leader who was running a clandestine war reaching into Iraq and Syria, I doubt I was alone in asking this question: How does Donald Trump personally benefit from this? In this case, "this" means this particular strike and, even more worryingly, could mean starting a war with Iran. Either way, the answer to the question of Trump's perceived personal benefit is central in understanding this situation in a way it was not when it came to the saber-rattling that has defined previous Republican administrations.

One thing we know, after years of being caught up in the hellscape of Trump's America, is that this president experiences no motivations outside of personal self-interest. This is especially true when it comes to anything related to foreign policy, where Trump's decisions are guided strictly by his desire to bolster his own ego, make money, or obtain some political advantage. For better or worse, to understand where we're headed after Trump's dramatic escalation of hostilities with Iran, we have to ask and answer that initial question: What does he get out of it?

Trump's terminal narcissism has long been the distinguishing factor between him and most of the Republican coalition he leads. However distasteful the beliefs of someone like Sen. Lindsey Graham, who is so excited at the prospect of war with Iran that it feels pornographic, there can be no doubt that Graham is motivated by a sincere belief that war is a good thing. Similarly, when George W. Bush started the war in Iraq in 2003, he may have had an eyeball toward his re-election prospects, but his main motivation did seem to be a genuine belief that the war was winnable and would benefit the United States.

Trump, however, is a man unburdened by having beliefs beyond whatever flatters his own ego or otherwise benefits him personally. Subsequently, his foreign policy has been guided by two desires: 1) Making money or gaining a political advantage or 2) His racist (not to mention hopeless) desire to prove that he is smarter than Barack Obama.

This much was made obvious during the impeachment hearings in the House, when a series of State Department witnesses painted a picture of a president whose only lens for dealing with Ukraine was an investment in the false claim that Ukrainians had conspired with Democrats to undermine him and, of course, his hope that he could strong-arm Ukrainian President Volodymyr Zelensky  into fabricating evidence for a conspiracy theory about former Vice President Joe Biden.

Indeed, diplomat David Holmes testified explicitly that when he asked European Union ambassador Gordon Sondland what Trump thought of Ukraine, Sondland said Trump only cares about "big stuff." When Holmes pointed out that Ukraine was effectively at war with Russia — the sort of thing most people think of as "big stuff" — Sondland clarified that "big stuff" only means that which Trump views as serving his own personal interests.

We've so far seen the same thing with Trump and Iran. Even though Trump has had a bunch of Iran hawks in his ear night and day — including Secretary of State Mike Pompeo and former national security adviser John Bolton — his interest in that nation has largely been limited to his goal of trying to show up Obama, because he cannot stand the idea that a black man is more skillful and intelligent than he is. That's why Trump tanked the deal Obama made with Iran to stop that country from developing nuclear weapons. It wasn't because Trump had given any consideration to the terms of the agreement. It was because Obama had made the deal, and Trump is mad-jealous of Obama and is a total racist. So a painstakingly negotiated international agreement had to be dumped as part of a larger mission to erase the legacy of the first black president.

This stick-it-to-Obama motivation also explains the shape of Trump's erratic relationship with North Korea, in which he emphasizes showy photo-ops with dictator Kim Jong-un meant to make Obama look like a failure, even though, on substance, the "deals" Trump has made with Kim are useless. The profit/personal gain motive also explains Trump's ongoing infatuation with Russian President Vladimir Putin, who ordered interference in the 2016 election on Trump's behalf and is already doing the same for Trump in 2020.

So while it would be overly simplistic with any other president to assume he was foolishly trying to provoke a war out of some half-baked calculus of personal interest, it would be foolish to ascribe any other motivations to Trump.

The most obvious contender for "what Trump gets out of this" is that he has been impeached and is going into an election year with stubbornly underwater approval ratings, and sees war with Iran as a Hail Mary pass to whip Americans into a wartime fever — much as happened behind Bush in 2003 — which might be enough to drag him across the line in what will likely be a close election.

Sadly, this theory has much to recommend it. As folks on Twitter quickly discovered, Trump was flogging a conspiracy theory in 2011 and 2012 accusing Obama of doing just that — starting a war to get re-elected.

One of the most predictable aspects of Trump's narcissism is that he always projects his own flaws and evil impulses onto others. If he accused Obama of feeling an urge to start a war for political advantage, we can pretty much bet that same impulse lurks in Trump's own heart.

Unfortunately, Trump's favorite assessment of what's politically popular comes from flipping on Fox News and seeing what his beloved anchors are talking about. Unsurprisingly, the folks at Fox News are just as eager to clamor for more war in the Middle East as they were during the Bush years. Worse, they're hyping the possibility of war using rhetoric that's tailor-made to cater to Trump's worst impulses, including his love of conspiracy theories and his seething envy of Obama and desire to outdo him.

In the past, Trump's lens of pure self-interest has been, while largely a bad thing, surprisingly helpful in reducing his interest in going to war. It made him resistant to aides like Bolton who made pro-war arguments based on their theories of foreign policy, as such presentations were not about Trump himself and therefore bored him.

That may well have changed. Trump now has various reasons to think that war with Iran will help his prospects and boost his ego. He even took to Twitter on Friday morning and tried to dunk on Obama for negotiating the nuclear deal with Iran.

Trump's ego is involved here, as well as his plausible belief that he can leverage a war to distract the country from the impeachment process and improve his electoral prospects. Unfortunately, there is good reason to believe that under this president, the United States is about to make a dreadful foreign-policy mistake that will make the Iraq war look like a beach picnic.