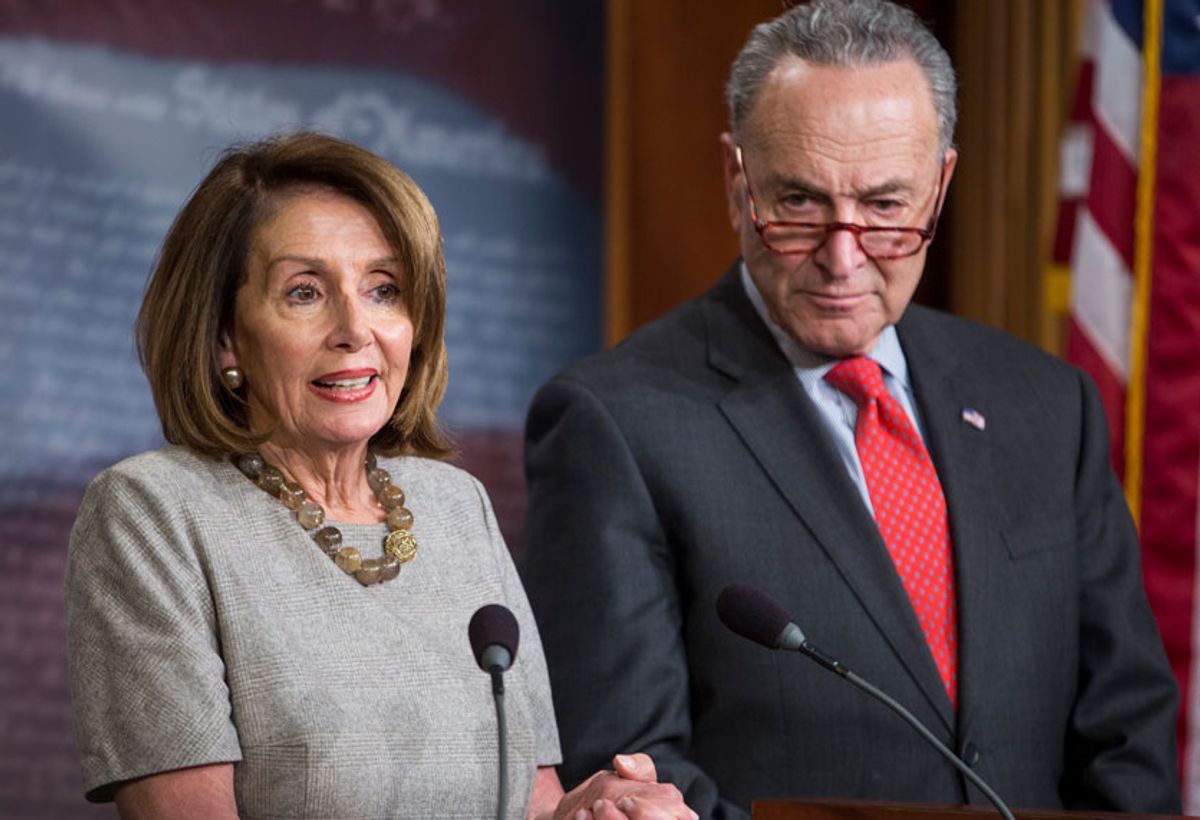 Donald Trump is enjoying a burst of applause from the new trade agreement by our nation, Canada and Mexico. But he owes that applause in part to Democrats who were looking out for American interests. And he should hope Americans don’t come to understand the deep, long-term damage Team Trump is doing to our economy.

Congressional Democrats agreed to the revised USMC Agreement only after changes were made at their insistence to improve opportunities and competitive conditions for American workers.

For example, within a few years, 40 to 45 percent of cars must be made in factories that pay workers at least $16 an hour, a policy that affects only Mexico where average auto worker pay is just $2.60 an hour.

Showing they could negotiate and impeach at the same time, House Democrats approved the new trade agreement the day after voting to impeach Trump. (They have also passed more than 400 bills, most of them with bipartisan support, that now molder on the desk of Mitch McConnell, the Senate majority leader.)

“There is no question of course that this trade agreement is much better than NAFTA,” Speaker Nancy Pelosi said in announcing the bipartisan agreement on USMCA.

Pelosi said the new deal will be “infinitely better than what was initially proposed by the administration.”

Team Trump’s initial proposed rules on automobile manufacturing would “lead to a decline in production of vehicles and parts in all three North American countries, with shifts toward greater sourcing of both vehicles and parts from outside of the region,” analysis by the International Monetary Fund IMF found.

Under other changes negotiated by the Democrats, the USMCA should make it possible to organize independent unions in Mexico, will require serious safety inspections and impose environmental rules so that Mexican manufacturers do not gain a cost advantage by avoiding the costs of cleaning up their pollutants.

Now let’s look at some other trade issues.

Trump regularly denounces wind power, asserting that it “destroy everybody’s property values, kill all the birds.” And in December he ranted about “fumes” and other ludicrous claims against wind turbines, which supply about 8% of U.S. electricity.

His tariffs would significantly slow the growth of electricity from wind, a form of subtle subsidy for coal, the dirtiest of fuels.

Trump’s solar panel tariffs will cost 62,000 American jobs and reduce investment by $19 billion from 2017 through 2020, according to a solar industry study.

That lost investment means 1.8 million fewer homes will rely on solar power and there will be 26 million metric tons of carbon dioxide emissions that could have been avoided.

The administration argues that it is actually helping the solar industry by reducing its reliance on imported photovoltaic panels and related equipment. Who sought these tariffs? Two bankrupt solar panel makers, both foreign-owned, Suniva, a Chinese-owned company in Georgia, and SolarWorld Americas, a German-owned company in Oregon. Protecting inefficient enterprises raises costs long-term and creates a drag on economic growth.

Trump’s war on American soybeans has helped spur increases in Midwest farm bankruptcies, according to the American Farm Bureau.

Of course, Trump claims the opposite. He gives credit to using your tax dollars to subsidize farmers who cannot sell their products in China, but without mentioning you or the taxes you pay.

“Our great Farmers will recieve [sic] another major round of ‘cash,’ compliments of China Tariffs, prior to Thanksgiving,” Trump tweeted on Nov. 17. “The smaller farms and farmers will be big beneficiaries.”

What Trump calls China tariffs are in reality a tax increase because the costs are born by Americans through either higher prices or, for business owners, reduced profits.

But big corporate farms, not yeoman farmers, benefit most from Trump’s taxpayer bailout, an analysis of government records by the Environmental Working Group found.

The bottom 80 percent of affected farms will get on average just $5,136. Some may collect only $1.

The EWG pointed out that the top 10 percent of recipients—the biggest and most profitable industrial-scale farms in the country—have received half of the $6 billion in aid given since August. Their average: $177,000 each.

EWG found that “the richest of the rich” farmers—the top 1 percent—received 13 percent of the federal payments. Three were given more than $1 million each and 45 got more than $500,000.

And the payments have been slow. Taxpayers have had to pay more than $1 million just in interest for late payments to farmers.

Trump’s trade policies are mostly about erecting protectionist barriers, which Republicans opposed on principle before the party morphed into the Trump cult. In the short run, protectionism will result in more jobs in specific industries, that get protection and can raise prices. But the economic damage costs far more than the benefits. Trump tariffs are a net loser.

For decades the goal of American trade policy has been making it easier to trade manufactured goods. That also has the effect of enabling corporate employers to take advantage of low-cost labor in the developing world.

The net effect in America: downward pressure on wages for the “poorly educated,” whom Trump professes to love. But those who have kept their jobs in manufacturing tend to be better educated with at least some college.

Team Trump delays job safety protections and kills job safety training that saves lives. Predictably worker deaths are rising where safety enforcement is falling. Overall, union rights are under constant assault. And then there’s the Trump administration love of child labor, which is both immoral and will tend to pull down wages further.

How many of the poorly educated who support Trump know about these and other policies designed to make them worse off?

Without a doubt, trade has been bad for lower-skilled manufacturing workers. In the first 15 years of this century 5.5 million manufacturing jobs vanished, Bureau of Labor Statistics data show, most of them lost during the George W. Bush administration.

Unionized workers were hit the hardest. About 40 percent of union manufacturing jobs vanished, twice the overall rate of job loss. So, the better paid were more likely to lose than were lesser paid factory workers.

A good deal for Trump

With one notable and self-serving exception, Trump has done nothing to lower the costs Americans bear by reducing trade in services. Indeed, Trump rarely mentions services Many of his comments suggest that despite having a degree in economics he doesn’t understand that there are two components of trade data: goods and services.

Trump has made it easier for him to hire foreign workers at Mar-a-Lago, his Florida resort, under a visa program. He does this by claiming he cannot find workers in the Palm Beach area even though thousands are looking for such work. How does Trump get away with it? Trump puts a single, blind classified ad in a newspaper each year. Applicants have a very brief period to respond and must do so via fax, a technology few low-paid workers possess.

On the other side, Team Trump maintains barriers for professionals, which in turn raises costs to consumers. Americans would save about $700 per family annually if we just allowed qualified doctors trained in places like Canada and Germany to practice in the United States, economist Dean Baker calculated. That’s $100 billion per year we could save.

“The liberalization of trade in goods is largely a done deal,” according to Baker. “Tariffs are already zero or near zero in the vast majority of cases. The potential gains from further liberalization are limited” because people are spending a diminishing share of their income on goods.

The growth is in services, not manufactured products.