Moussaka, but make it Bulgarian

Besides scrapping the eggplant, Bulgarian moussaka combines ground meat with potatoes and a spiced tomato sauce 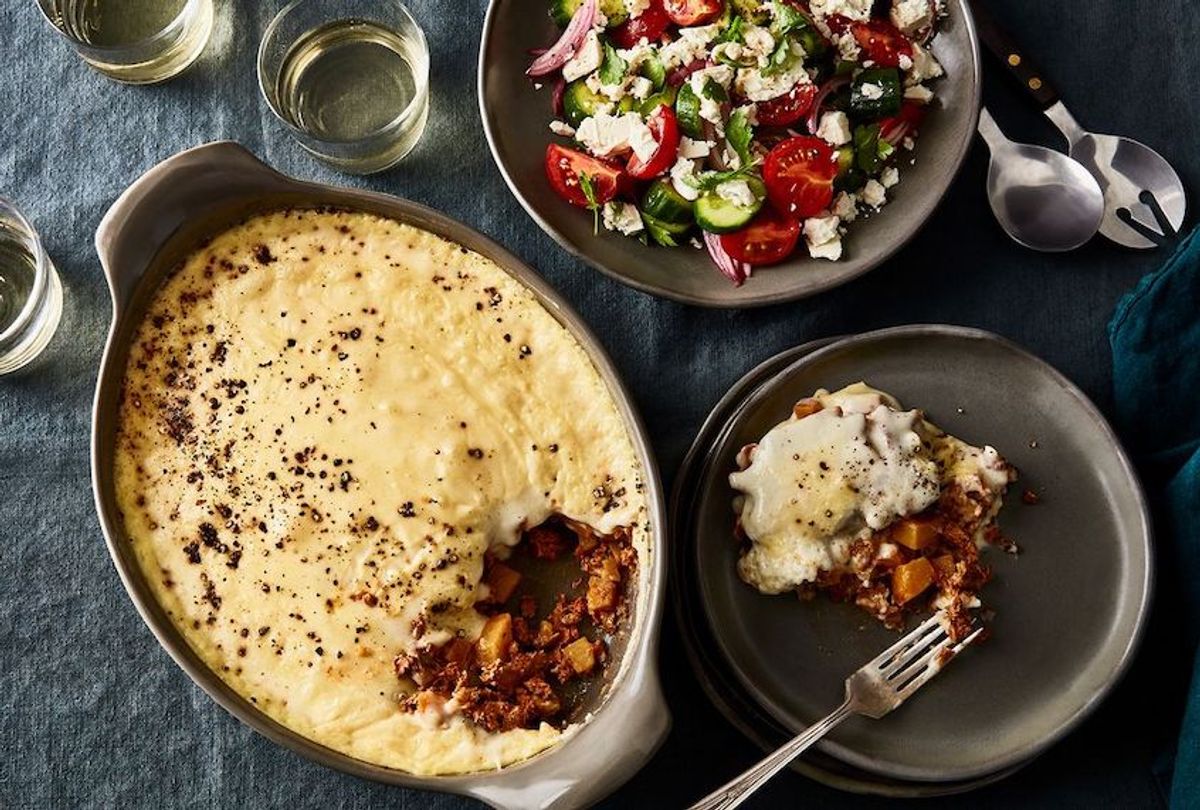 While many are most familiar with Greek-style moussaka (consisting of layers of eggplant, potatoes, and minced meat topped with a white sauce), this dish has variations all throughout the Eastern Mediterranean. The origin of the word moussaka actually comes from the Arabic musaqqa’a (مسقعة), which roughly means “to moisten,” referring to the fact that many versions of this dish consist of slices of eggplant that soak up a zesty tomato sauce.

Some food historians suggest that the origin of this dish is found in the Ottoman Empire, and a version of moussaka is served in Turkey to this day. This theory makes the most sense considering that the spread of moussaka throughout the Mediterranean coincides with the reach of the Ottoman Empire at its peak. Currently, you can find versions of this dish in the Levant (the area around Lebanon), Egypt, Romania, Greece, and the Balkans, and each former Ottoman territory has its own way of preparing it.

Preparation of the Bulgarian version in particular is appealing for many reasons. I don’t like cooking slices of eggplant, and the thick béchamel that crowns Greek moussaka can be, at least for me, too rich. Besides scrapping the eggplant, Bulgarian moussaka combines raw ground beef or pork with diced potatoes and a spiced tomato sauce, and the mixture is baked almost like a meatloaf or a shepherd's pie. The mystery herb one of my Bulgarian friends once described to me is actually summer savory, which you can replace with oregano to taste. The topping is simple to whip up and requires no time at the stove: Simply whisk together yogurt, eggs, and a little bit of binder (in this case, flour) and pour it on top of the meat mixture.

In my research, I found that many recipes call for mushroom-flavored bouillon cube, which is commonly used in Eastern European cooking. Instead, I call for finely minced mushrooms to provide that umami flavor. The end result is a hearty (yet not-too-heavy) one-dish meal you can whip up on a weeknight. This dish can also be assembled a day in advance before baking, which makes everything even more manageable.

The side Shopska salad is optionable, though highly recommended.

2. Set a large pan over medium heat and add the oil. When the oil is hot, add mushrooms, onions, and garlic and cook, stirring often, until onions soften and mushrooms release liquid.

4. Add potatoes and stir to coat them with the sauce. Add 1/4 cup water and stir. Cook potatoes until they are mostly cooked through, stirring occasionally so that they do not stick to the bottom. Season with salt and pepper.

5. Remove pan from the heat, add ground meat and stir to combine thoroughly. (You are not cooking the meat here, just combining it with the potatoes and seasonings.) Put the meat and potato mixture into the casserole dish and bake uncovered for 30 minutes until the meat is cooked. The top should be lightly browned and the meat should be solid like a meatloaf or burger patty. Drain the excess liquid and fat from the casserole dish, if necessary, and set aside.

6. In a bowl, beat together yogurt, flour, eggs, and baking soda. Season with salt and pepper lightly. Pour the yogurt mixture over the meat and potatoes and return to the oven. Bake for 15 minutes or until the top is golden and the yogurt is just set. (Do not overcook. The yogurt layer should be just firm enough so that it is not pure liquid. If you cook it too long, the yogurt will curdle.)

7. Let cool at room temperature for 10 minutes before serving.

Directions
1. Half peel the cucumber by paring every 1/4 inch or so to create a striped pattern and then slice it into 1/2 inch rounds. Toss them into a medium mixing bowl.

2. Chop the onion and bell pepper into a 1/2 inch dice and add them to the bowl.

3. Seed the plum tomatoes and dice and add them to the bowl along with the olives and parsley.

4. Whisk the oil and vinegar together and add it to the mix. Toss the vegetables untill they are coated with the dressing. Taste and add salt and pepper as needed.

5. Now place the salad into an appropriate size serving bowl and shower the top with the feta. Chill before serving.