Julián Castro endorses Elizabeth Warren for president: “Elizabeth and I share a vision of America”

Warren, Castro said, is "one candidate I see who's unafraid to fight like hell" for "America's promise" 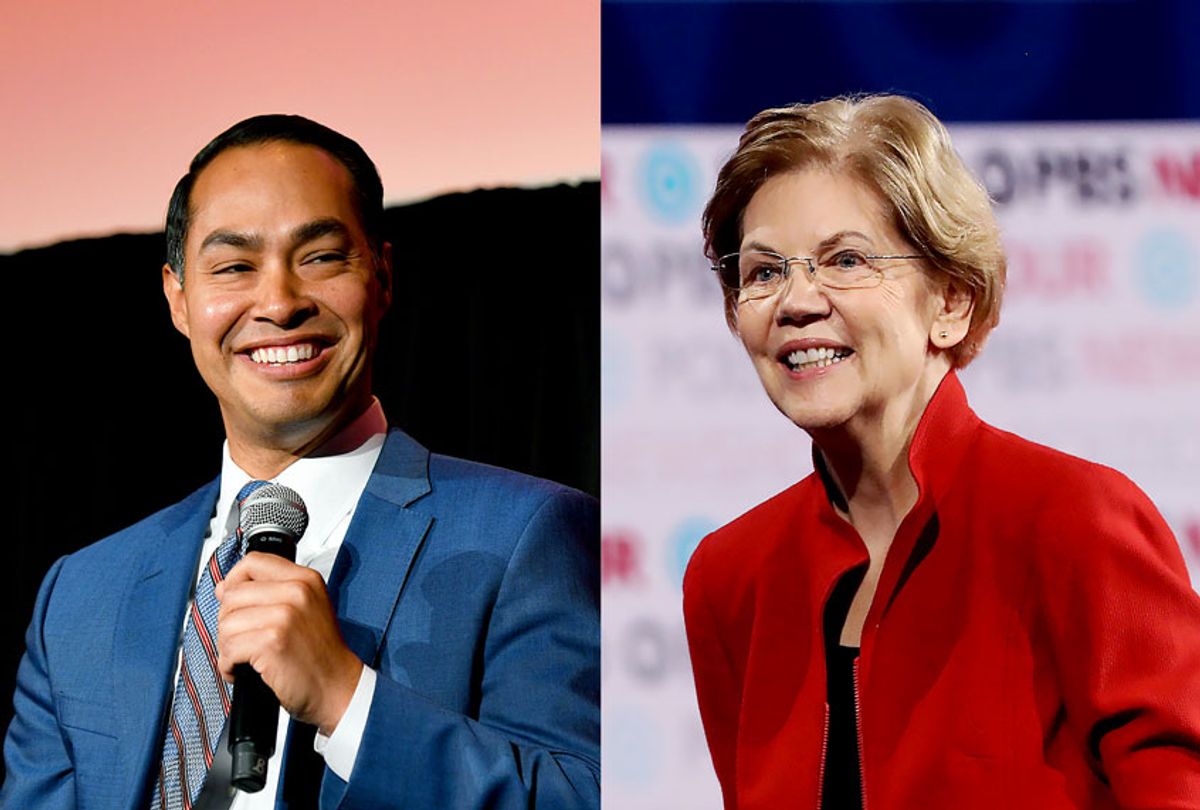 “Elizabeth and I share a vision of America where everyone counts,” Castro said in a tweet. “An America where people—not the wealthy or well-connected—are put first. I'm proud to join her in the fight for big, structural change.”

The endorsement comes just days after Castro, the lone Latino candidate in the race, announced his departure, less than 30 days out from the Iowa caucuses.

In a video posted to social media, Castro explained why he chose to back Warren using his own family's story.

"My story wouldn't be possible without the strong women who came before me. My grandmother, Victoria, came to the United States at seven years old. She taught her family the value of hard work as she cleaned houses and worked as a maid," he said. "She passed on those values of hard work and perseverance to my mother, a single mom to myself and my twin brother, Joaquin."

The video shows Castro visiting Warren at her home.

"You did so many things in this campaign,” Warren told Castro in the video. “And it continues to matter. It's not just in the past tense — it matters."

“No one is working harder than you,” Castro told her.

Warren, Castro said in the video, is the "one candidate I see who's unafraid to fight like hell to make sure America's promise will be there for everyone” and "will make sure that no matter where you live in America or where your family came from in the world, you have a path to opportunity too. That's why I'm proud to endorse Elizabeth Warren for President."

“You’ve been a powerful voice for bold, progressive change and I’m honored to have your support,” she wrote. “Together, we'll fight to make sure every single family in America has a path to opportunity.”

The video came together after the pair “remained friendly” on the campaign trail, according to The Boston Globe. Castro frequently criticized other candidates like former Vice President Joe Biden and former South Bend, Indiana Mayor Pete Buttigieg, but was largely complimentary of Warren. Castro and Warren spoke about the endorsement after he ended his campaign last week, CNN reported, and he traveled to Boston to record the video.

Castro will appear with Warren at a campaign rally in Brooklyn on Tuesday, according to CNN. Several Castro campaign aides have already joined Warren’s team and Castro plans to campaign for Warren in the coming weeks.

CNN’s Jeff Zeleny noted that Castro could prove a useful surrogate in Iowa if Warren is tied up with President Donald Trump’s impeachment trial during a key stretch of campaigning. Even before his endorsement, The Texas Tribune had floated Castro as a top running mate choice for Warren.

MSNBC’s Joy Reid predicted that the endorsement could give Warren’s campaign a lift with voters of color, where she had been slow to build support.

“Good get for Warren in a field where nearly everyone who has dropped out to date has declined to endorse anyone,” Reid wrote. “Castro was among the most progressive in the race and has built up a following among socially active black & brown folks… Castro is an example of someone who could wind up having influence as an endorser disproportionate to his ultimate reach in the race.”