Barack Obama never met in person with Hassan Rouhani, who remains in power despite Gosar’s claim to the opposite 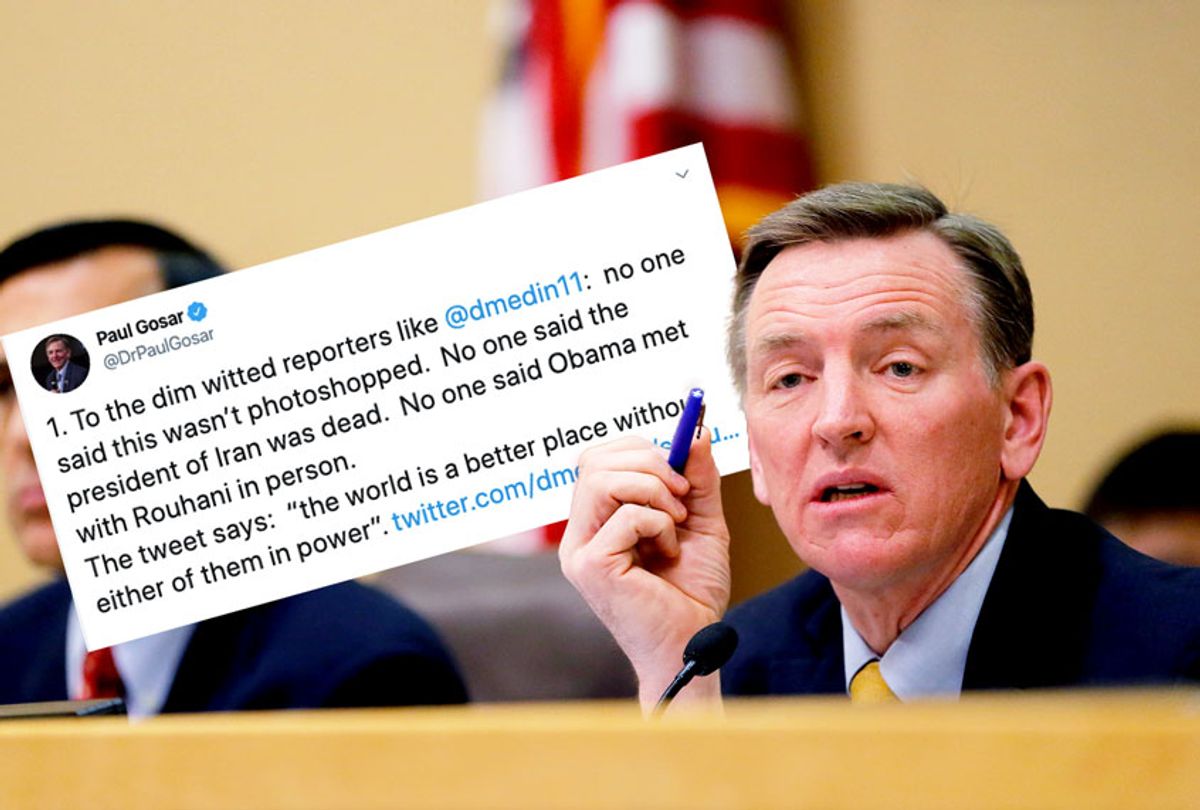 "The world is a better place without these guys in power," Gosar wrote alongside the altered photo, which appeared to depict Obama with two thumbs.

Obama had never met in person with Rouhani, who remains in power despite Gosar’s claim.

CNN’s Andrew Kaczynski pointed out that the image was actually from photoshopped from Obama’s 2011 meeting with then-Indian Prime Minister Manmohan Singh.

Gosar quickly came under heavy criticism over the post.

“The world would be a better place if elected officials didn't share photoshopped images and take pride in being ignorant,” Rep. Sean Casten, D-Ill, wrote. “This is irresponsible.”

But Gosar was defiant about the tweet, hitting out at “dim-witted reporters” who called him out for posting a fake image.

“No one said this wasn't photoshopped. No one said the president of Iran was dead. No one said Obama met with Rouhani in person," he wrote. “The tweet says: ‘the world is a better place without either of them in power.’”

Many commenters again pointed out that Rouhani was still in power.

“The world is better without Obama as president. The world will be better off without Rouhani,” Gosar added in another subsequent tweet.

“The point remains to all but the dimmest,” he wrote. “Obama coddled, appeased, nurtured and protected the worlds No. 1 sponsor of terror.”

The same fake image tweeted by Gosar was previously used by a super PAC to tout Sen. Ron Johnson's, R-Wis., criticism of the Iran nuclear deal in an ad, BuzzFeed News reported.

Gosar has a long history of conspiracy theories and incendiary tweets. He pushed a debunked conspiracy theory that the deadly white nationalist rally in Charlottesville was “created by the left” and carried out by an “Obama sympathizer.” He also suggested it was funded by billionaire Democratic donor George Soros, the subject of countless conservative conspiracy theories.

Gosar also later boosted another debunked conspiracy theory that Soros’ son was the whistleblower whose complaint triggered the impeachment inquiry into Trump.

In November, he tweeted an acrostic that spelled out the phrase “Epstein didn’t kill himself.”

Gosar’s rhetoric during his five terms in Congress has been so divisive that even his family members threw their support behind his challenger in 2018. Six of Gosar’s siblings appeared in a campaign ad for Democratic challenger David Brill, warning voters that their brother was “absolutely not working for his district.”

Gosar responded by attacking his siblings and comparing them to communists.

"These disgruntled Hillary suppporters (sic) are related by blood to me but like leftists everywhere, they put political ideology before family. Lenin, Mao and Kim Jung (sic) Un would be proud," he said at the time. “I hope they find peace in their hearts and let go all the hate. To the six angry Democrat Gosars — see you at Mom and Dad's house!"