Democrats claim to value diversity — but with Booker off the debate stage, every leading contender is white 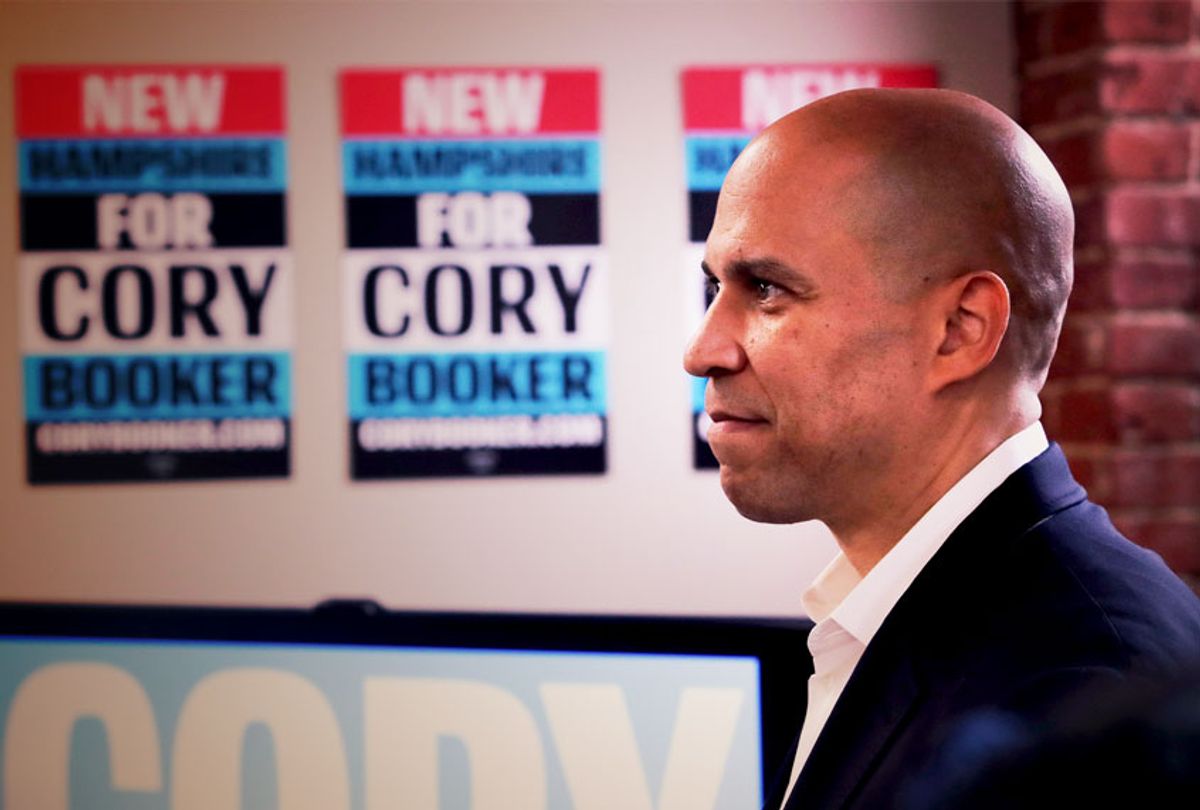 For most of Sen. Cory Booker's career, the New Jersey Democrat has been at the center of establishment politics. Now, thanks to the Democratic National Committee's rules for participation in the Jan. 14 debate in Iowa, he finds himself on the outside looking in.

With the DNC’s reliance on polling and campaign cash metrics for qualifying, Booker faces the prospect that for the second month running in a row he won’t make the televised debate stage, less than three weeks before the first Democratic votes are counted in the Feb. 3 Iowa caucus.

Not since Booker's days of running as an insurgent, confronting the powerful incumbent Mayor Sharpe James in Newark, has he faced such long odds.

Initially, the Democratic Party's 2020 presidential race featured the most diverse field of presidential candidates in history. Now, with the departures of Sen. Kamala Harris and former HUD Secretary Julián Castro and the entrance of former New York Mayor Michael Bloomberg, the field is skewing to being whiter and wealthier — a lot wealthier.

The party whose major unifying theme is its supposed advocacy for the 99 percent now appears more like a pyramid scheme, where the number of donors and the amount of cash you raise is what determines your relevance to the DNC process.

Booker told NBC’s Andrea Mitchell on Jan. 2 that the DNC’s restrictive criteria was generating “a sense of frustration” among voters he had spoken with in Iowa, who saw the party as “excluding people from a debate stage because they don’t have the money that billionaires have to get on these stages.”

New Jersey’s native son then went on to list his successes in the Hawkeye State that he felt the DNC was ignoring.

“As Iowa Starting Line just pointed out, I am the No. 3 candidate in just general popularity and net favorability in the whole state,” he told Mitchell. “We have the most endorsements, and in the kind of surge we are seeing I am the No. 1 campaign for the percentage of Iowa women contributing too.”

“Instead of letting Iowans choose,” Booker continued, the primary campaign “is being dictated” by party leaders in Washington. "It makes no sense.”

Democratic candidates have only until Jan. 10 to qualify for the next debate, which according to Ballotpedia will require “225,000 unique contributors and at least 5 percent support in four eligible polls or 7 percent support in two eligible state-level polls.” It's almost impossible that Booker will meet those criteria — and Andrew Yang probably won't either, which would leave five white candidates on the debate stage in Des Moines.

There’s pretty convincing evidence that Booker’s campaign is already being marginalized by major media like the New York Times, which was once critical to establishing his national brand.

The only Booker stories getting play are the ones fixated on how much money he has raised.

In a Jan. 4 Times roundup, written in the aftermath of President Trump’s decision to order the killing of Iranian Maj. Gen. Qassem Soleimani and entitled “Airstrike Pushes Foreign Policy to Front of Presidential Race,” Booker was not mentioned, although he is a member of the Senate Foreign Relations Committee.

The views of former Vice President Joe Biden, Sen. Bernie Sanders, Sen. Elizabeth Warren, Sen. Amy Klobuchar and Mayor Pete Buttigieg were all incorporated. Bloomberg, was also cited, with the Times reporting he had “rebuked” Sanders for describing Trump’s action as an assassination.

Similarly, in an NBC report surveying the 2020 Democratic presidential field’s response to the latest developments in Iraq, Booker’s take was also MIA.

It’s not that Booker didn't have a relevant take on our delicate geopolitical moment, one he’s honed after years of serious contemplation and study of these issues.

“Make no mistake — Qasem Soleimani was a ruthless, evil leader who had orchestrated countless attacks that have cost American lives,” Booker said in a statement posted on his Senate website. “Today, many questions remain and must be answered on the intelligence reports that led to this action, what steps were undertaken to prepare our personnel and partners in the region, and the consequences of an escalatory attack with no clear endgame.”

He continued, “This President has no long-term strategy for dealing with Iran, bringing stability to the Middle East, or avoiding military conflict with Iran. The reality is that Americans are evacuating from cities across the region because this morning Americans at home and abroad are at risk from Iran’s potential retaliatory actions.”

From the trajectory of the Democratic nomination process to this point, it appears that the party has prematurely nationalized the contest with its arbitrary debate standards. This has resulted in marginalized the opinions of voters in places like Iowa and New Hampshire.

It has been fairly argued that the lack of voters of color in those two early voting states gets the entire intra-party debate off to a non-representative start. in which issues relevant to older and more rural white voters frame the debate for a party that’s totally reliant in a general election on voters of color in metropolitan areas.

Overlay that with the DNC's debate-culling process, and the whole contraption starts to resemble the deeply flawed Electoral College more than a free and open democratic contest.