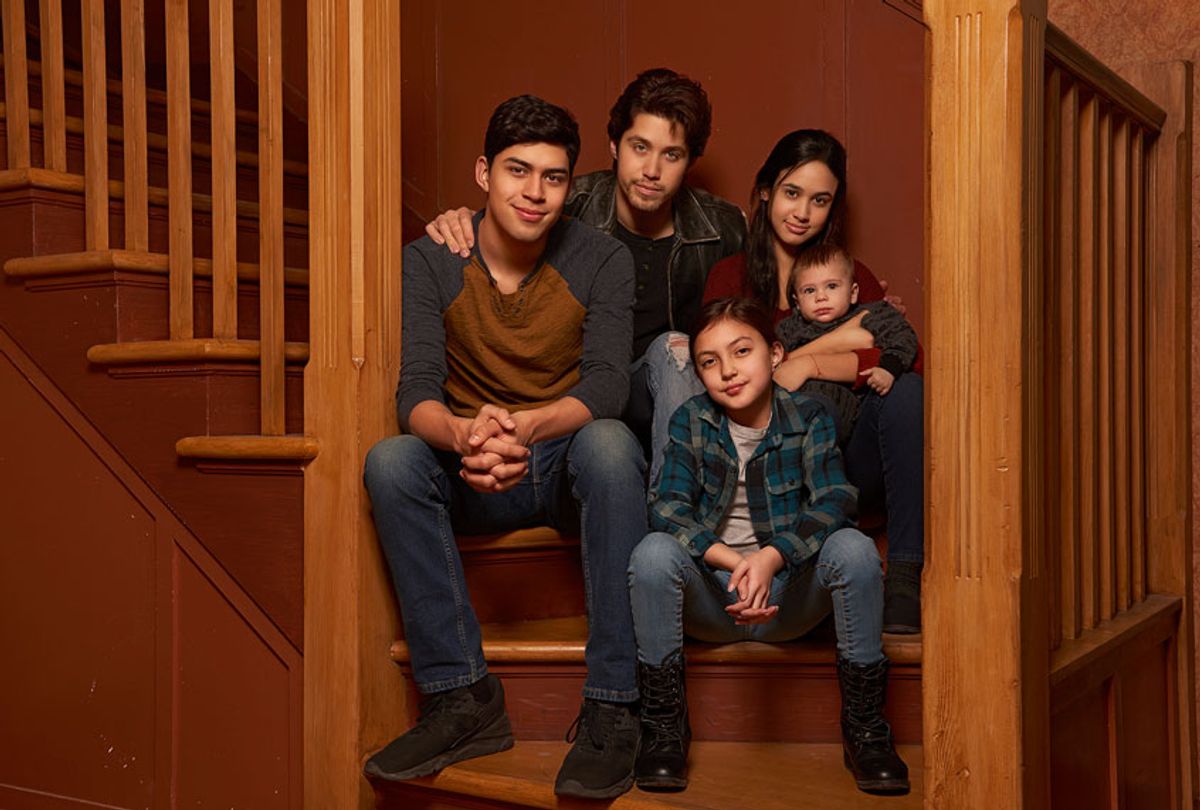 Fox introduced the world to the original “Party of Five”and the Salingers, a band of kids orphaned when a drunk driver killed their parents, in 1994. By the time it came on and came of age, I had matured out of the emotionally sodden teen drama demographic. Or maybe it just wasn't for me.

But I get the obsession.  People who loved “Party of Five” wrapped themselves in its angst,  its romances, and the Salingers’ individual stumbles as if it were a weighted blanket. Even then the writers understood the cleansing comfort of a good cry teased out of the audience by way of acoustic music.

The eldest Salinger, Charlie (Matthew Fox), is a legal adult at the time of their life-shifting tragedy and chafes at having to surrender his journey of finding himself to take care of his kid brothers and sisters. Bailey (Scott Wolf) is all exposed nerves and eventually develops a drinking problem, Julia (Neve Campbell) is sensitive and sweet, Claudia (Lacey Chabert) is lippy, and baby Owen, who was played by an assortment of infant and child actors throughout the show’s six year run, is a baby.

Allow me to decode some of the tone you may be picking up in those grafs: while I didn’t detest “Party of Five” per se, it  simply didn't compel me because I couldn’t relate to the Salingers, who have it much better than the kids I knew who lost their parents either due to death or court-ordered removal. Tense as their lives are, they still live in a lovely San Francisco home that the kids purpled up with melancholy on the weekly.

That may be the reason Freeform’s “Party of Five” reboot spoke to me in ways the original never did – the Acostas’ precarious situation feels much closer to the jagged edge of reality than the Salingers ever approached.

But they're orphaned not by a car crash but draconian immigration policy that rips the family apart over dinner. One moment Javier (Bruno Bichir) and Gloria (Fernanda Urrejola) are eating with Valentina and baby Rafael in the restaurant they run and own. Without warning, ICE officials burst in and announce they couple is being detained.

At first they refuse to believe it. Neither can we. Javier and Gloria run a legitimate, healthy business, striving to remain in the system’s good graces by providing employment opportunities and paying taxes. No matter.  Within moments the couple is taken away as Valentina watches helplessly, screams, and cries.

From there the story slides into contours familiar both to “Party of Five” diehards and anyone who has viewed the ongoing reports about family separation and deportation. And the tears these scenes coax out of the viewer are impressively, honestly earned.

A biting current runs through this “Party of Five” that never was present in the previous one purely because of who the Acostas are. Overnight, the siblings are forced to grapple with very adult problems like debts, bills, keeping the family’s income stream steady, keeping Rafael healthy.

At the same time, all of them except Emilio are still teenagers and children with the concerns typical of that age – Does the girl like me? Am I cool enough for my peers? Can I pass the big test? And what gives my older brother the right to order me around when he’s barely showing up anyway?

In updating “Party of Five” to suit our current definition of what constitutes a family tragedy,  Lippman and Keyser have traded in the maudlin gauze of emotionality that passed for realism in the ‘90s for the grinding anguish these kids face. Instead of San Francisco, the Acostas' troubles are set in Los Angeles.

And the people in their community aren’t necessarily on their side and may not feel as inclined to show leniency to these kids as they acclimate to a frightening situation. A coldly even speech that a teacher delivers to Lucia after she pleads on behalf of a shaken Beto is simply devastating. She will show him no special mercy, the woman tells the girl, because the child of illegal immigrants deserve none.

But this also echoes what some say as they stare at photos and footage of unaccompanied minors sleeping on concrete floors in border detention facilities: the crimes a parent committed long ago must be paid for by their children.

Emilio, who was an infant when his parents crossed the border illegally, has dreams of being a rock star that only strengthens his resolve to shirk off responsibility, and Larracuente so believably channels his favored son’s denial that at times his performance begs the viewer to want to throttle him. All of the performers pour such sanguine heat and passion into their portrayals as each of the siblings implode in way bombastic and small.

Beto, who is already struggling at  school, stops showing up — for good reason, since he’s forced to do what he can to keep the restaurant running in his parents’  and Emilio's absence.

In reaction to her parents’ sudden vanishing, Lucia acts out in worrisome ways, but also understandably rebels at the expectation that as the older of the two girls, the main caretaking of baby Rafael will fall to her.

Valentina, the capable second youngest, does what she can to hold the family together for her absent mother and father at home, at school, and at the family business. She’s the one they call upon to begin organizing the books because they have nobody else. She’s still so very young and cannot easily accept the situation that has dropped on her, one in which her still-living parents are legally barred from being part of her life.

A person can’t blame Emilio for clinging to dreams the world is forcing him to defer. His attitude is that of a young American who was never told that the declaration that he can be anything doesn’t entirely apply to DACA recipients like him. And his assumption of guardianship is all that stands between his brothers and sisters remaining together and the system splitting them up. That heavy cloud is one the show refuses to ignore.

Western culture, by way of literature, film, and television, is conditioned to romanticize the lot of the orphan: Think of Batman. Superman. Harry Potter. Lemony Snicket’s three young Baudelaire siblings, Bambi, Anne of Green Gables. The “Star Wars” universe spins around the orphaned: Luke Skywalker, Leia Organa, Rey and even Din Djarin, hero of “The Mandalorian.”

Each of these figures is characterized by their extraordinary resourcefulness. Many are fueled by the desire to either avenge their dead parents or live up to the expectations they instilled in them. But they exercise a freedom that children with  present mothers and fathers dream of enjoying.

Suddenly losing one’s parents is far from fantastical, as the deluge of family separation reports about children forced to take care of other children show us. Flooding us with these stories has not stemmed the tide of injustice. It’s still happening, we’re just collectively directed our attention elsewhere.

Which is precisely why this new “Party of Five” matters more and contains a vital relevance that the previous version never did. The Salingers live in a tragic fantasy where they’re afforded the wealth, time and privilege of acclimating to their situation, to grow up and move on. Reality’s cruel march holds no such patience for the Acostas, whose parents are close enough to connect over a phone call but too far away to give their children the guidance they need and that they, the parents, didn’t adequately have themselves.

There is no exhilaration in this unknown place without comfort and protection of mom and dad, only uncertainty – the kind that makes you want to see what happens next to the Acostas, and hope for the very best.

"Party of Five” premieres with two back-to-back episodes 9 p.m. to 11 p.m. Wednesday, Jan. 8 on Freeform. The first episode is currently streaming on Hulu.