"I find this insulting and demeaning to the Constitution of the United States," Lee added. "It's un-American" 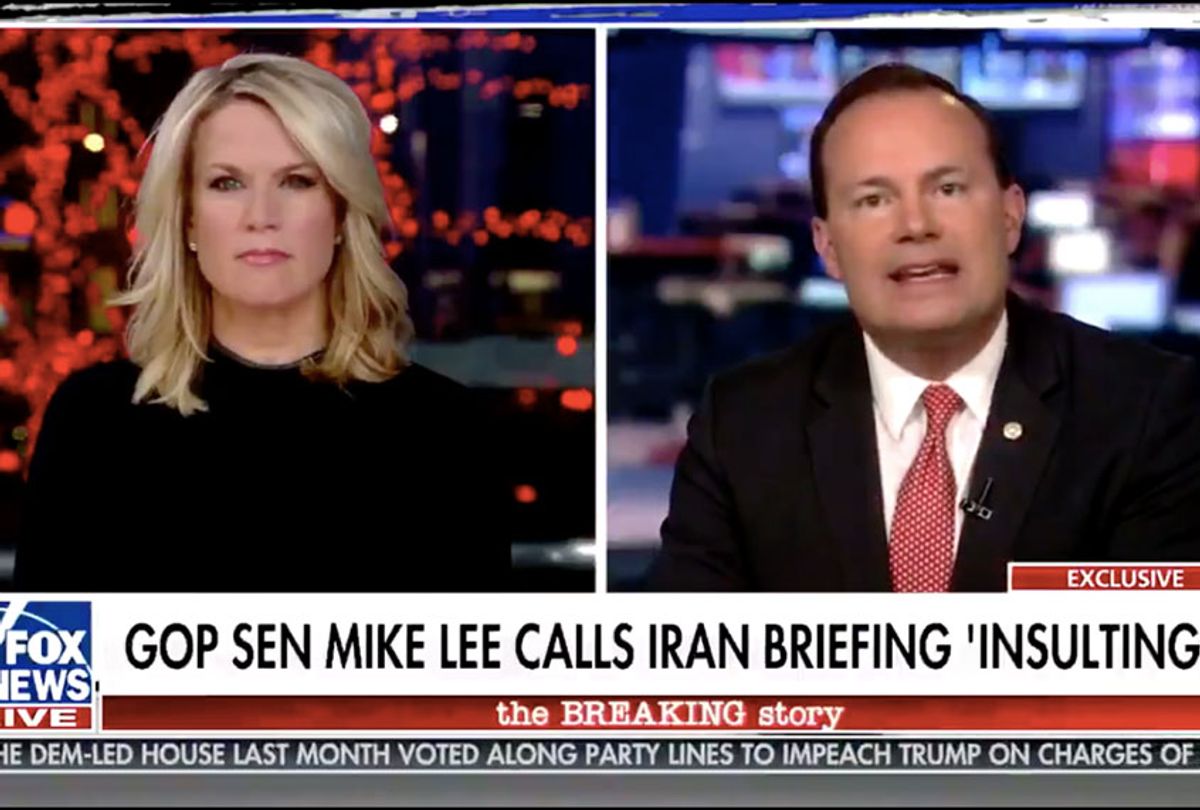 Sens. Mike Lee, R-Utah, and Rand Paul, R-Ky., blasted the Trump administration for delivering a short briefing on Iran, which failed to answer any of their questions about the ordered killing of Qassem Soleimani.

After the briefing, Lee told reporters that he supports President Donald Trump but would not tolerate the kind of briefing delivered by the administration.

“The briefing lasted only 75 minutes, whereupon our briefers left,” Lee told reporters. “This, however, is not the biggest problem I have with the briefing, which I would add was probably the worst briefing I've seen at least on a military issue in the nine years I've served in the United States Senate."

Lee, who like Paul has long held a very different outlook on executive war powers than many of his Republican colleagues, said he would support a War Powers resolution brought by Sen. Tim Kaine, D-Va., after the briefing “changed my mind.” The resolution would require the president to get approval from Congress to launch military action against Iran. Speaker of the House Nancy Pelosi, D-Calif., announced that the House would vote on the resolution Thursday.

"I find this insulting and demeaning to the Constitution of the United States," Lee said after the briefing. "It's un-American. It's unconstitutional. And it's wrong . . . They are appearing before a coordinate branch of government responsible for their funding, for their confirmation, for any approval of any military action they might take. They had to leave after 75 minutes while they were in the process of telling us that we need to be good little boys and girls and not debate this in public. I find that to be absolutely insane."

Lee said that the officials refused to go into “sensitive” information, even though senators have security clearances and the briefing was held in a secure facility on Capitol Hill.

Paul agreed that that briefing was “less than satisfying” and slammed the administration for claiming that the 2002 authorization for military force in Iraq allowed the military to kill a top Iranian general in Baghdad.

"I see no way in the world you could logically argue that an authorization to have war with Saddam Hussein has anything to with having war with people currently in Iraq," Paul told reporters.

Paul added that using the 2002 authorization to justify the strike was “absurd” and an “insult.”

Lee later went on Fox News and doubled down on his criticism, explaining that he was angered at the “flippant attitude” of the briefers.

"What I'm concerned about is the flippant attitude that they reflected, both with regard to the underlying facts on Friday's attack and especially as they relate moving forward to any subsequent attack that we might undertake on Iran," Lee said. "There was a dismissive attitude, one that was displayed in such a way that resulted in them saying: 'We can't identify what circumstances in which we would need to come back to Congress to get approval or authorization.' That is antithetical to the Constitution."

The heated response drew the ire of some of the president’s more ardent defenders. Fox Business host Lou Dobbs accused Lee of trying out his “Benedict Arnold impression,” while Sen. Lindsey Graham, R-S.C., claimed that Lee and Paul were “empowering the enemy.”

Lee responded to Graham’s criticism by urging him to read the Constitution.

"That's fundamentally antithetical to the Constitution," Lee told Fox News. "Look, I love Lindsey Graham. He's a fantastic guy, we work closely on a lot of issues. He's dead wrong to suggest this is playing a game . . . the Constitution of the United States is not a game."

Paul called Graham’s comments a “gutter type of response” during an interview with CNN.

“I think it’s sad when people have this fake sort of drape of patriotism and anybody that disagrees with them is not a patriot,” Paul said. “For him, to insult and say we’re not as patriotic as he is — he hasn’t read the Constitution . . . He insults the Constitution, our Founding Fathers and what we do stand for in this republic by making light of it and accusing people of lacking patriotism. I think that’s a low, gutter type of response.”