Why does the Republican Party exist? Mainly to clean up Donald Trump's messes 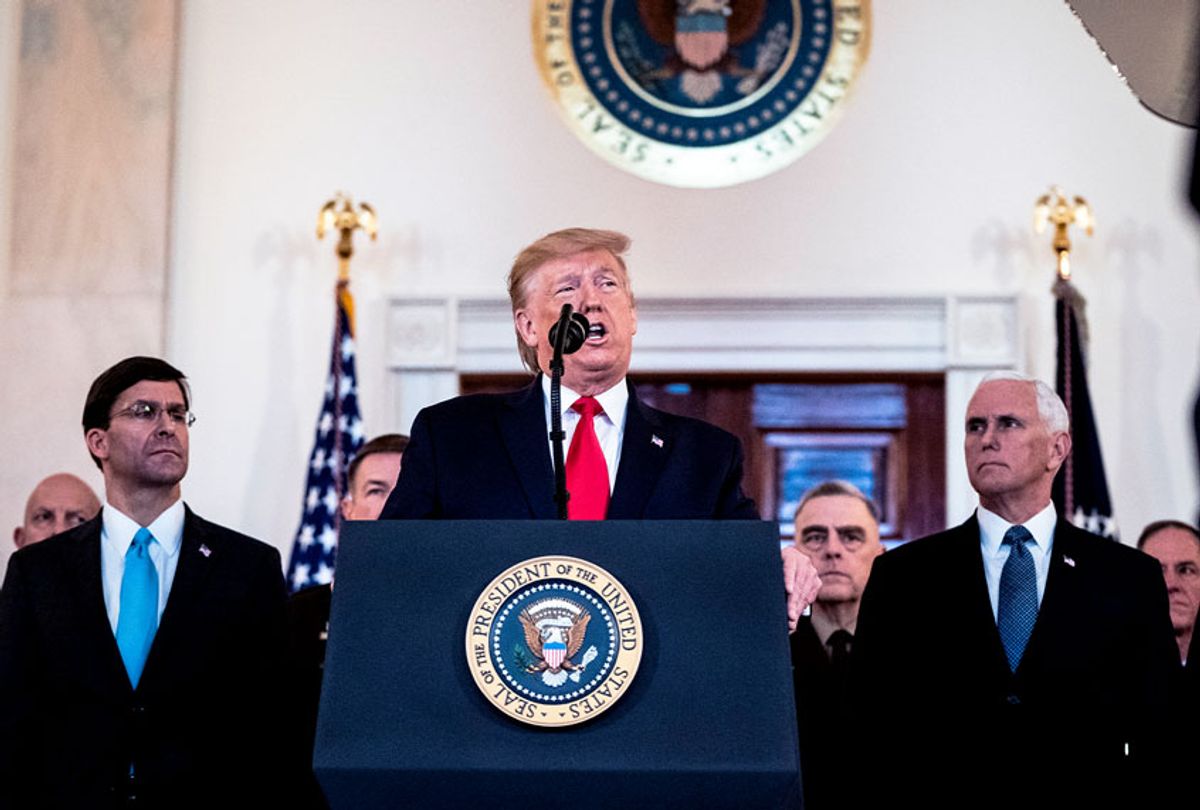 President Donald J. Trump address to the nation from the Grand Foyer at the White House on Wednesday, Jan 08, 2020 in Washington, DC. (Jabin Botsford/The Washington Post via Getty Images)
--

Wednesday was a wild day in politics. The morning started off with serious fears that the U.S. was about to go to war with Iran. By lunchtime those fears had petered out (mercifully), to be replaced by  the dawning and bizarre realization that the Iranian leadership had offered Donald Trump a face-saving way to back down from military confrontation. But even more alarming was Trump's White House address, in which he struggled to read his strange and incoherent speech and snuffled so much one might have thought the Teleprompter was blasting pollen directly into his nostrils, giving late-night show hosts plenty of fodder.

None of this slowed down Fox News or the Republicans on Capitol Hill from pretending that Trump was a Winston Churchill-like figure, standing strong athwart history against the forces of evil.

On Wednesday afternoon, the White House held an intelligence briefing for members of the Senate to explain why Trump nearly bumbled us into war by impulsively ordering the assassination of Maj. Gen. Qassem Soleimani, Iran's top military leader. I should perhaps put "intelligence briefing" in scare quotes, because reliable reports suggest it was a display of hand-waving and tap-dancing from CIA Director Gina Haspel and other administration officials to distract from the real reason Soleimani was killed, which was Trump is impulsive and careless and thought a high-profile drone killing would be a cool reality-TV stunt to kick off his 2020 re-election campaign.

But the Republicans who went to the briefing — most of them, anyway — walked out and auditioned for next year's Oscars by pretending they just had just borne witness to a magnificent display of Trump's awe-inspiring brilliance. Sen. Marco Rubio tweeted that the briefing was "compelling" and that anyone who disagrees just opposes "everything Trump does." Sen. Lindsey Graham literally argued that skepticism of the administration's obvious lies is "empowering the enemy."

This entire display of obsequiousness is just the latest example of how the Republican Party has been successfully harnessed by Trump. Now that the failed businessman and reality TV host has a multibillion-dollar machine at his disposal, his main use for it is as a crisis PR agency, dedicated to cleaning up one mess after another that he creates by being impulsive, corrupt and callous.

Frankly, if they weren't a bunch of morally bankrupt monsters, it would be tempting to pity Republicans for their compulsion to debase themselves on a daily basis by pretending not to see that their leader is a tantruming toddler with the impulse control of a frat boy who's just downed a six-pack in half an hour.

This Iran debacle is just the latest effort to praise the naked emperor's magnificent new wardrobe. There is also the ongoing cover-up effort from Republicans regarding Trump's cockamamie extortion scheme against Ukrainian President Volodymyr Zelensky, which got the president impeached just last month.

Senate Majority Leader Mitch McConnell continues to show no sign of changing his mind about how to conduct the impeachment trial in the Senate. His plan is to not even pretend that it's actually a trial before rushing toward the acquittal that no one who actually consults the evidence believes Trump deserves. Despite Speaker Nancy Pelosi withholding the House articles of impeachment in an effort to get McConnell to do something crazy, like agree to hear witness testimony or consider the evidence in any meaningful way, McConnell is digging in his heels and has declared that the Senate "will not cede our authority to try this impeachment."

McConnell obviously knows Trump is guilty and, like the rest of his party, views his role merely as a PR specialist here to make sure his client never faces anything resembling a consequence for his lengthy pattern of criminality. Which is why McConnell is willing to look like he's hiding something by refusing to call witnesses. He is hiding something. It's just that what he's hiding is so bad that it's better to have people wonder what he's hiding than to expose the truth and remove all doubt.

For a brief, shining moment Wednesday, it appeared that a couple of Republican senators were fed up with having to play the clean-up crew after Trump had created yet another giant mess. After the let's-pretend-we're-not-being-led-by-a-moron "intelligence briefing" Wednesday, Sens. Mike Lee of Utah and Rand Paul of Kentucky, both Republicans, walked out and vented genuine frustration at reporters.

Lee, who was clearly agitated called the experience "probably the worst briefing I’ve seen at least on a military issue in the nine years I’ve served in the United States Senate" and complained that the White House officials had said "I'm sure we could think of something" for a rationalization if Trump decided, on impulse, to take the nation to war.

"They had to leave after 75 minutes while they were in the process of telling us that we need to be good little boys and girls and not debate this in public," Lee continued.

It was pretty fun to watch, at least for liberals. (Fox News, realizing Lee was on a roll, cut away before its viewers could fully absorb that a Republican senator was saying the things loyal Trumpers aren't supposed to admit, even to themselves.) But despite all the excitement on social media that this might represent a real crack in the facade, there's little to no chance that Lee's momentary frustration turns into a lasting desire to demand more from a thin-skinned, impulsive president who can't be bothered to think more than five seconds into the future.

These flare-ups of rebellious urges happen occasionally within the Republican caucus, but they always fall back in line. Rand Paul, for instance, has been through this cycle before: Acting momentarily like he has a conscience before slipping right back into being a cheerleader for the orange menace all Republicans must pretend is a great statesman.

No, in reality this is what the GOP is now: An expensive PR firm dedicated to lying to the public about whether the most powerful man on the planet is a nincompoop. Its loyalists are sticking by that job, even in the face of said nincompoop committing serious crimes, as he likely did when extorting Ukraine, or even when he flirts with getting us into a catastrophic war, as he did with Iran. There is no bottom here — no dignity that Republicans will refuse to throw away to defend the snuffling, racist blockhead they call their leader.