The politics of my cleavage 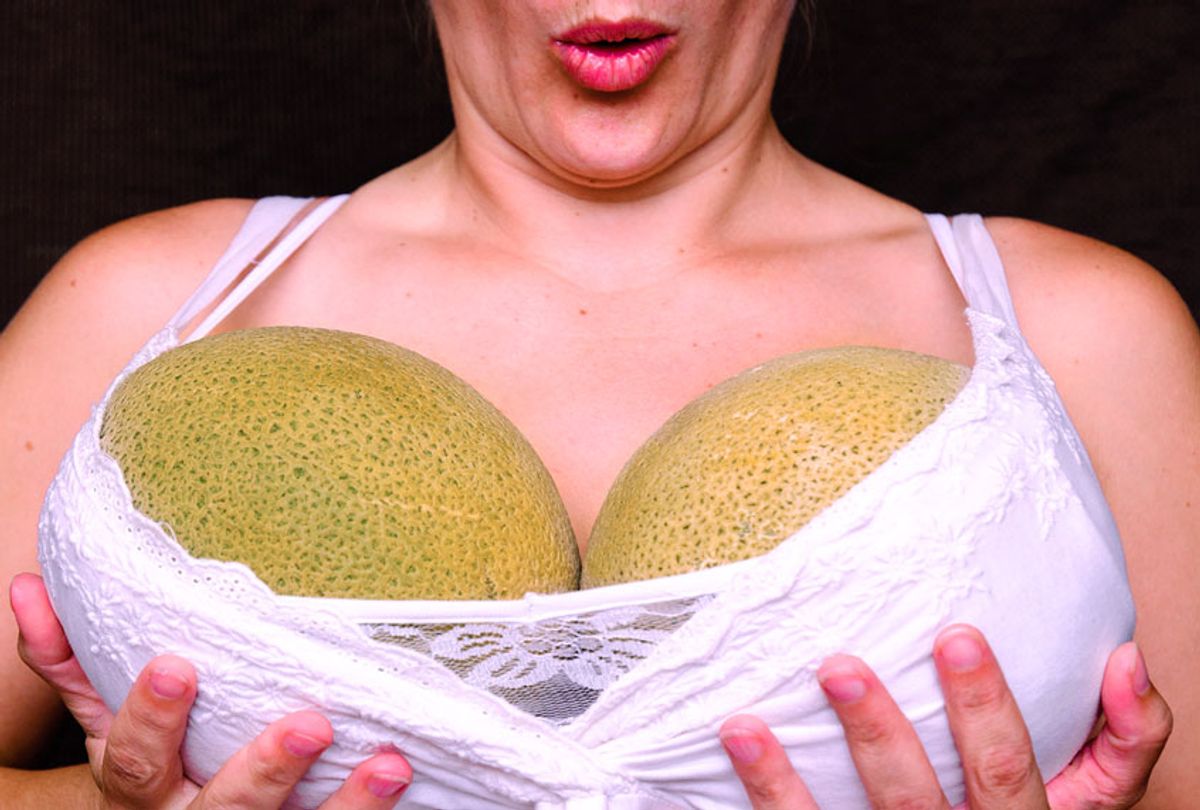 A woman holds melons in her shirt. (Getty Images)
--

My breasts are a topic of concern at every family event. During cocktail hour or the milling-around period before dessert, a well-intentioned female relative will corner me with questions that let me know as delicately as possible that she thinks I look like a slut.

In early years, these questions revolved around my bras: Where was I buying them? Would I like to go bra shopping and get measured for a proper fit? In subsequent weeks, I would receive bras in the mail, complete with testimonials regarding comfort and offers to fund additional bras and matching panties, if desired.

After a few years and many ignored requests to stop talking about my damn breasts, I began wearing increasingly revealing clothing because then the conversation moved from the whispered confabulations in a corner and over to group conversations on the couch, which is more comfortable and within easy reach of cheese straws and my wine glass. Last Thanksgiving, the group was larger than usual, and my mother was struck dumb, staring at my breasts so persistently that I was tempted to remind her that my eyes are up here.

And then someone asks the inevitable question: “You don’t wear that dress when you are teaching, do you?” I admit that I do, which causes a sensation, and they break into small groups to discuss the issue. The conversation is out of my hands at this point, so I generally leave them to it and go off in search of a martini.

My breasts are a problem when I am buying clothes. Everything about me is out of proportion — including my peanut-sized head — so I face the choice of billowing, dowdy garments or tighter clothes that sometimes cruelly expose my physical infelicities. I opt for the latter because they seem more honest. And while I try not to have any deep-seated opinions or principles of any kind, I have found that my body and clothing choices have inadvertently transformed me into an activist against the perception of women’s bodies as, using Amanda Maclean’s term, obscene.

It’s not as if I show up in the classroom and at family events wearing hot pants and pasties. I buy my dresses from the “Wear to Work” section at Macy’s, generally on clearance. I just have a lot of cleavage, and I don’t try to hide it. While my family approach discussions of my clothes from an academic perspective — it becomes an ethical question, What Ought One to Wear? — the cultural foundation for these mental gymnastics is the assumption that women’s bodies are inappropriate, save in intimate situations. My body makes my family feel uncomfortable, mostly because they are embarrassed to think that people outside the family might get a funny feeling in their pants if they see me dressed like that.

Lots of people appear to have devoted their lives to telling girls and women what to wear, although they are mostly outraged about leggings for some reason. That terrifying mother who felt compelled to write an open cease-and-desist letter to the leggings-wearing women at Notre Dame claimed she was pleading on behalf of her vulnerable sons, who seem to have a hard time concentrating. Actually, a lot of men apparently have a hard time concentrating, so it turns into a time-consuming and pressing social business to make sure that women are sufficiently covered up. Somehow it is my responsibility to make sure that these men are getting their work done, but at least everyone in my family is pitching in to help.

I suppose I should be proud that my family and the extended American culture are confident that I can focus on the tasks at hand no matter what men do, even if they are going out of their way to attract sexual attention. I know deep down, however, that I have failed them all repeatedly. This shouldn’t come as a surprise to anyone who knows me. My most notable transgression was during a high school presentation on HIV/AIDS and other sexually transmitted infections, complete, I believe, with photographs projected on a huge screen. A boy I had long noticed for his broad shoulders and well-defined jawline innocently sat next to me, and his cologne wafted over with unsettling effects. Against the backdrop of an angry red vulva rife with sores and pustules, I began to sweat from every possible pore and tremble with lust. I had to run to the bathroom to wipe down my entire body and passionately wish for a stick of deodorant, thus missing the part about chlamydia.

Over the years, I learned to keep deodorant on hand and mitigate my physical responses to male bodies, although things get dicey when I see men of a certain build in a suit (jacket unbuttoned) or wearing green plaid pajama pants. And, as it turns out, my teaching duties include helping college-aged men develop similar skills. They might be distracted or disconcerted when they first meet me, but by a week into the semester, they know that they better pay attention to what I am saying if they want to pass my class. I like to think that I reassure them that they can indeed write persuasive, evidence-driven essays no matter what anybody in the room is wearing. I never intended to offer this service, but I bet they have a lot more confidence in themselves when they enter the work world.

I have tried to explain this to members of my family, but they brush off these arguments with incredulity and irritation. The way I see it, I am also doing a service to them because we always have something exciting to talk about. For such a close family, we differ widely on topics such as politics and religion, so it helps to have a common enemy, and my breasts always do the trick. I am really looking forward to that not-too-distant day when my breasts begin to sag and wrinkle — I can only imagine what they will say then.