The slow dread of "The Outsider," HBO's series that defies Stephen King expectations

The pulp horror novelist's murder mystery takes a while to pick up steam, but once it does, it's a satisfying tale 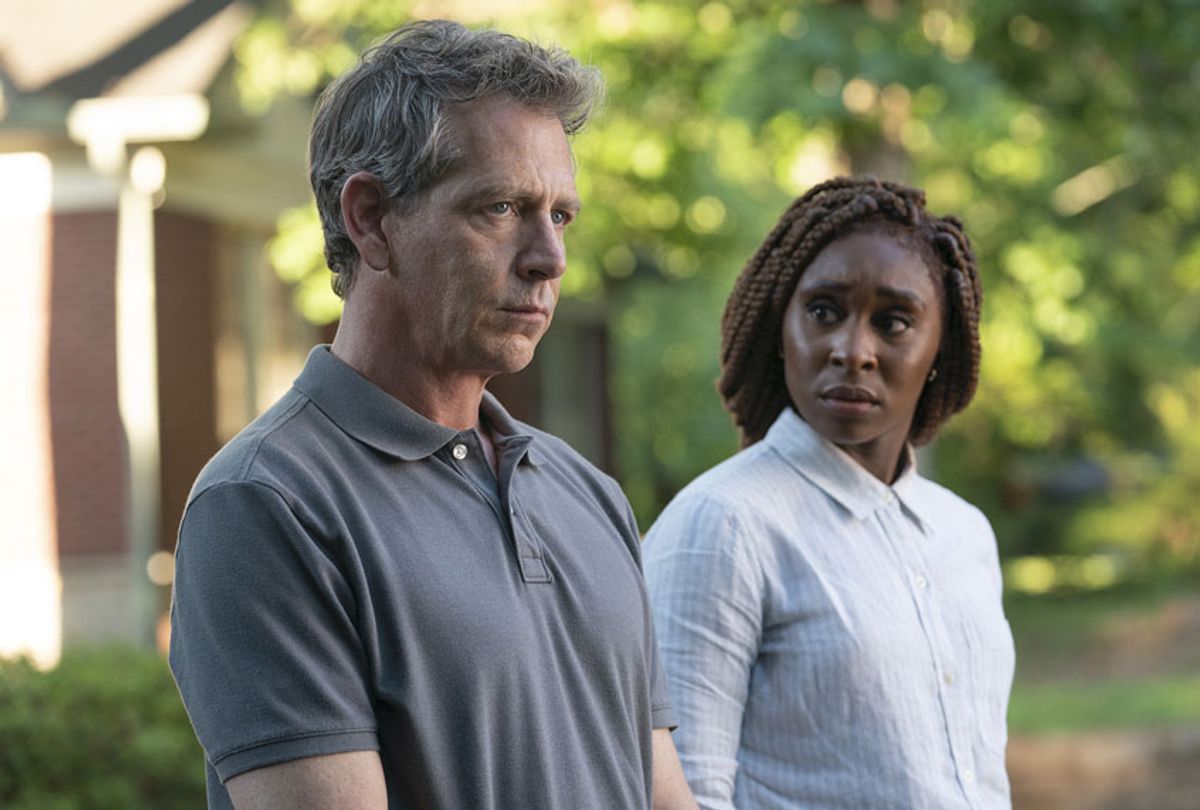 Ben Mendelsohn and Cynthia Erivo in "The Outsider" (Bob Mahoney/HBO)
--

Taking on Stephen King, even by way of a story like "The Outsider," attaches expectations to a film or TV series that aren't always met. Sometimes the means of meeting said expectations becomes part of the issue.

HBO's limited series version of King's murder mystery, a crime story that revolves around a supernatural element that challenges many of the standard reliable elements police rely upon to bring criminals to justice, exemplifies this.

Set in a Georgia suburb, "The Outsider" opens with a grisly discovery: The body of an 11-year-old boy who was sexually assaulted, torn to pieces, and left in the woods. Eyewitnesses and a parade of footage from nearby security cameras point at the town's baseball coach and teacher Terry Maitland (Jason Bateman). And his guilt is obvious nearly to the point of caricature. Not only are his fingerprints and DNA all over the crime scene, review of the video footage shows him intentionally looking into cameras, leaving no mistake as to his identity.

Homicide detective Ralph Anderson (Ben Mendelsohn), a man still dealing with the loss of his own son, channels his sorrow into a drive to arrest and charge Maitland, obliterating his reputation in the process.

But this supposedly open-and-shut case hits a snag when Maitland passionately contends he's innocent, and his family's counsel Howie Salomon (Bill Camp) produces footage showing him attending a literary conference in another city and in a room filled with people.

How, then, can a man be in two places at once? As soon as "The Outsider" poses this question even fly-by King aficionados who haven't read the 2018 novel will make a few guesses. While King's recent stories don't always involve monsters or sinister forces, they still draw from a well whose refreshment has a familiar flavor to it.

The journey bringing the narrative protagonists face to face with malevolence at the heart of "The Outsider" is not entirely predictable.  Once we head down that road, however, its writers and directors massage the tale's foreboding evenly and with skill, although it takes about three episodes to get it moving. This may clash with those previously mentioned expectations.

Varied as King's oeuvre has become over the years, he's still known for stories built for thrills, comfort, and speed all at once. Some of his plots move more slowly than others, but each has a little bit of Plymouth Fury lurking within.  He also has a way of gassing up that energy until the engine rumbles with a purring disquietude that warms up to a roar before lurching forth on a tread of unstoppable fright.

This remains true even as King has expanded his trademark horror into the crime story arena, a territory screenwriter and novelist Richard Price plays in. Price, though, is a steady, methodical storyteller associated with slow-burn narratives such as "The Wire," "The Night Of," and "The Deuce."

Between that and Bateman's directorial gloom coloring the first two episodes of "The Outsider" – the Emmy winner for "Ozark" is an executive producer of the series who directs the first two hours – the viewer experiences two types of energy that aren't a close fit initially.

Fortunately King's stories live and breathe through his characters, their interior drives and quirks, which is where Cynthia Erivo's Holly Gibney enters and almost singlehandedly picks up the inertia holding back "The Outsider" and kicks it loose.

Holly is a recurring character in King's recent universe, appearing in this novel and his Bill Hodges trilogy (seen in another TV series, "Mr. Mercedes"), and Erivo's interpretation is understated, her manner of speaking clipped. She channels Holly's supercomputer-level of mental processing and obsessive-compulsion into a muted, slightly quivering carriage and communication method that is unerring, precise, and can be interpreted as chilly.

It's worth pointing out that Erivo, a black actor, is playing a character written as white. Producers typically respond to questions about inclusive casting with an insistence that they selected the best person for the job. And the superior Erivo proves time and again that she is the best person in the projects she chooses, the latest being "Harriet." But I don't believe her pick was necessarily color-blind; it feels like a tacit reference to the title,  although "The Outsider" concretely refers to the evil at the heart of the story.

But Gibney is an outsider regardless of the case she's working. When Anderson's colleagues recommend bringing her on to the case, they remind him in the same breath that she's a loon and the best at what she does. Through her, Price's and King's writing styles snugly align. She's the most obvious person to tell the story of the surrounding environment simply by interacting with it, shedding light in the ways other figures in this tale do so as well.

Although Erivo stands out, the directors and Price, who writes six of the series' 10 episodes, give an outstanding cast a full palette of mourning tones to work with. Mare Winningham plays Ralph's wife Jeannie as his partner in recovering from their only child's death.

She's a stoic contrast to Julianne Nicholson's Glory Maitland, a woman alight with rage over what is happening to her husband and the pain that's been dropped on their family like a bomb from the sky.  As Howie Salomon, Camp becomes the immovable pillar around which Glory's livid anger dances like some wild flame, one of the many catalysts that propels "The Outsider" through more sedate stretches.

The drama's initial struggles with handling and maximizing "The Outsider"'s engine are mostly atmospheric. Bateman lays the groundwork that the directors coming after him must follow and develop, and as seen on "Ozark," his worlds exist in an engulfing shadow of inky gray that matches the ever-present grief and melancholy that is the base note of this series.

King's stories are often interpreted as metaphors for the many guises of fear, but this one is distinctly tear-sodden, from its meditative cinematography and editing to its methodical scripting. In the way of grief, it might help to accept its initially reluctant pacing as part of finding its momentum. Those tuning in with the expectations of King's signature creepiness, however, may quickly be done in by this treatment's prestige television crawl.