"How low can you go?": Trump shares photoshopped image of Nancy Pelosi in a hijab on Twitter

"Republicans: How long can you cover up for and defend the president's actions?" Sen. Chuck Schumer asked 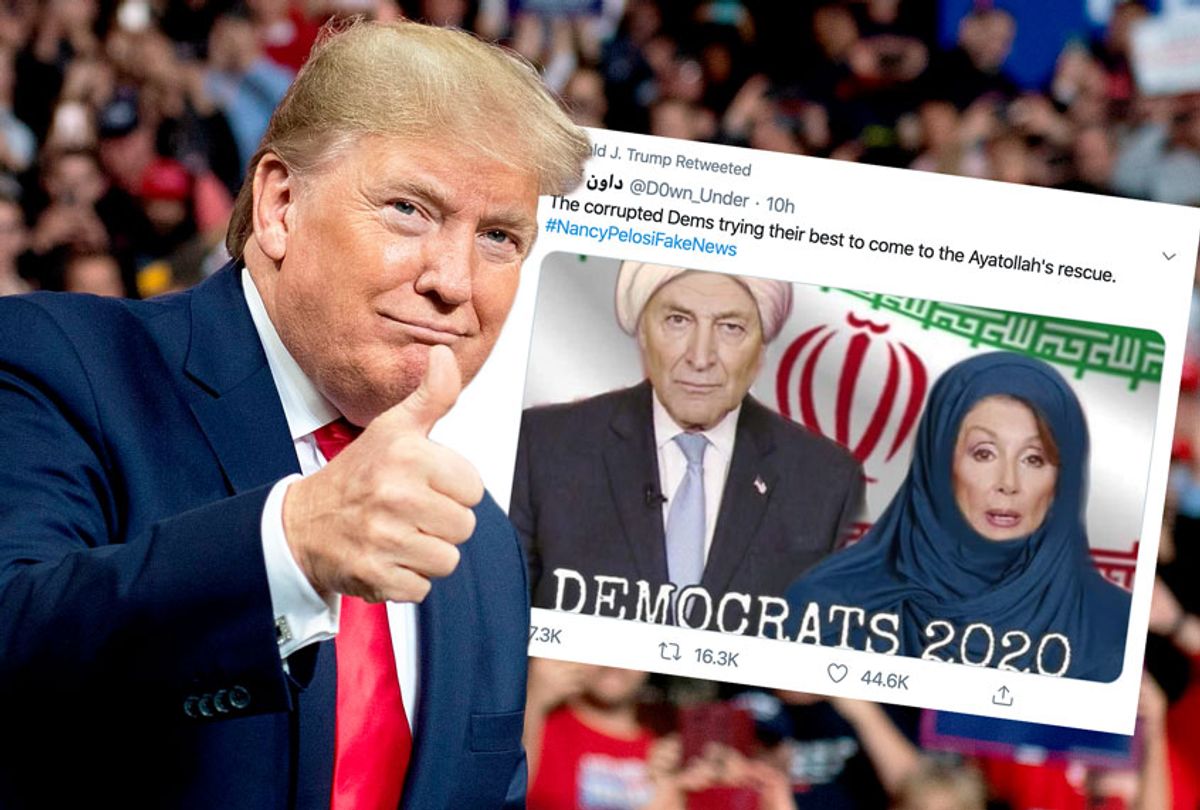 President Donald Trump shared a fake image of Speaker of the House Nancy Pelosi, D-Calif., and Senate Minority Leader Chuck Schumer, D-N.Y., in traditional Muslim clothing while criticizing Democrats over their response to the protests in Iran.

Trump re-tweeted a post with a badly photoshopped image of Pelosi in a hijab and Schumer in a turban Monday. "The corrupted Dems trying their best to come to the Ayatollah's rescue," the tweet said.

White House press secretary Stephanie Grisham told CNN that Trump shared the post to make clear that Democrats were "parroting Iranian talking points and almost taking the side of terrorists."

Trump weeted in support of Iranian protesters who took to the streets after Iran admitted to mistakenly shooting down a Ukrainian airliner, killing 176 people, throughout the weekend.

Trump and his supporters zeroed in on Pelosi's comment to ABC News chief anchor George Stephanopoulos over the weekend that "there are different reasons why people are in the street" to suggest that she was defending the Iranian regime.

"Why did Speaker Pelosi find it so hard on Stephanopoulos Sunday to condemn the Iranian dictatorship and support the demonstrators in the street?" former Speaker of the House Newt Gingrich, R-Ga., wrote. "It is sad to see the Democratic leader of the House dodge and waffle on the question of replacing an anti-American dictatorship."

Pelosi noted in the interview that there had been protesters against the regime before Trump ordered the strike that killed top Iranian military official Qassem Soleimani.

"The protesters are protesting—as I understand it, this brand of protesters—about the fact that that plane went down," she said Sunday. "And many students were on that plane and these are largely students in the street."

Pelosi said the shooting down of the plane was a "terrible, terrible tragedy. And they should be held accountable for letting commercial flights go at a time that was so dangerous."

"But there are different reasons why people are in the street," she added. "Of course, we would love to see the aspirations of the people of Iran realized with a better situation there. But escalating the situation unless we've exhausted every other remedy?"

Trump attacked Democrats on Monday, falsely claiming that the party was "trying to make terrorist Soleimani into a wonderful guy."

"The Fake News Media and their Democrat Partners are working hard to determine whether or not the future attack by terrorist Soleimani was 'imminent' or not, & was my team in agreement," he tweeted, referring to extensive questions over his justification of the strike. "The answer to both is a strong YES., but it doesn't really matter because of his horrible past!"

"There are a lot of bad actors, who are doing bad things and threatening bad things to us. We know that, Iran being one of them," Pelosi said Sunday. "But how do we deal with that in a way that calms rather than escalates?"

Schumer slammed Trump after he shared the fake image on Monday.

"President Trump: How low can you go?" he asked. "Republicans: How long can you cover up for and defend the president's actions?"