Elizabeth Warren: Bernie Sanders “disagreed” with me that a “woman could win” the presidency

"Do I believe a woman can win in 2020? Of course," Sanders said in a statement calling the claim "ludicrous" 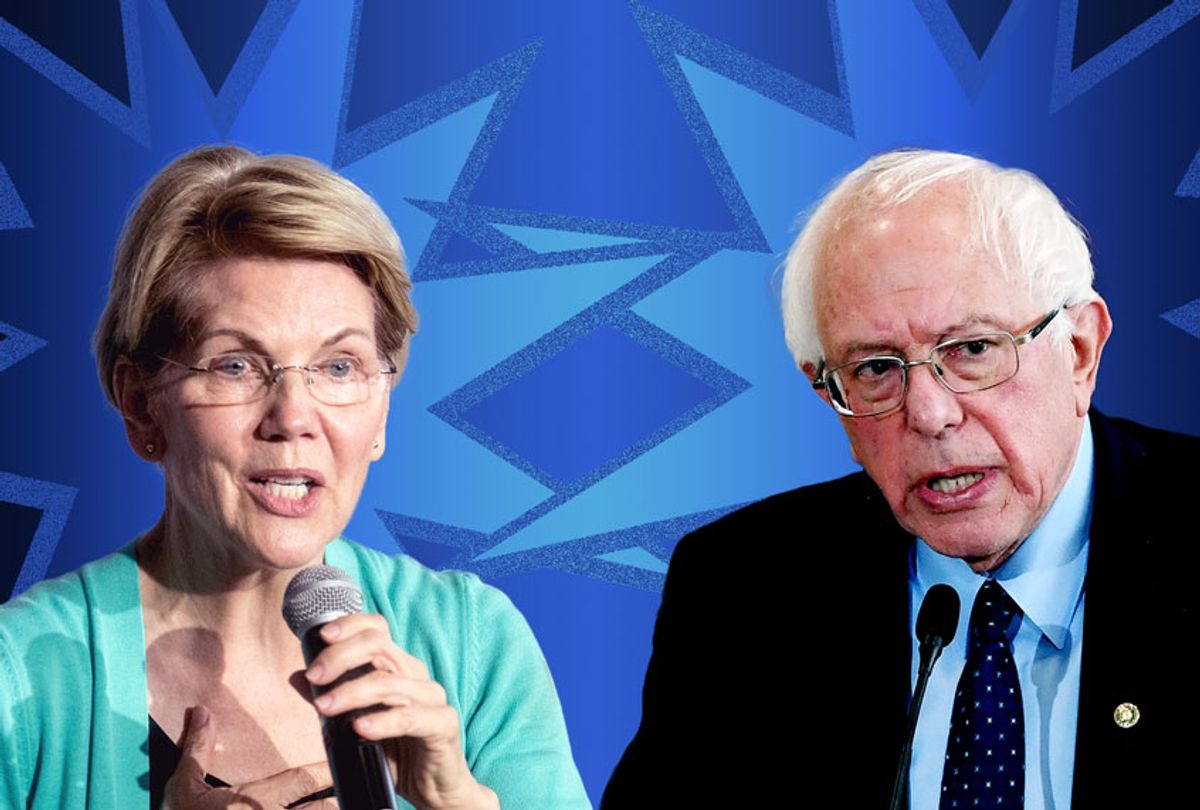 Sen. Elizabeth Warren, D-Mass., has claimed that Sen. Bernie Sanders, I-Vt., "disagreed" with her during a private conversation that a woman could win in 2020, an allegation which he has vehemently denied.

Warren made the claim one day before Tuesday's Democratic debate after the broadcaster CNN published a report citing unnamed sources alleging that Sanders privately told Warren that a woman could not win.

Sanders denied the report, saying that he told Warren that President Donald Trump was a "sexist" who would "weaponize whatever he could." He claims that did not say a woman could win, because "Clinton beat Donald Trump by 3 million votes."

The CNN report, which cited sources who spoke to Warren but were not in the room for her private dinner with Sanders in 2018, claimed that she "laid out two main reasons she believed she would be a strong candidate," but Sanders "responded that he did not believe a woman could win."

Warren's campaign declined to comment on the report. Sanders, who reportedly urged Warren to run in 2016 before jumping into the race himself, issued a forceful denial.

"It is ludicrous to believe that at the same meeting where Elizabeth Warren told me she was going to run for president, I would tell her that a woman couldn't win," Sanders told the network. "It's sad that three weeks before the Iowa caucus and a year after that private conversation, staff who weren't in the room are lying about what happened. What I did say that night was that Donald Trump is a sexist, a racist and a liar who would weaponize whatever he could. Do I believe a woman can win in 2020? Of course. After all, Hillary Clinton beat Donald Trump by 3 million votes in 2016."

Sanders campaign manager Fair Shakir called on Warren to speak out on the issue "directly."

Warren issued her own statement shortly after appearing to corroborate the CNN report.

"Bernie and I met for more than two hours in December 2018 to discuss the 2020 election, our past work together and our shared goals: beating Donald Trump, taking back our government from the wealthy and well-connected and building an economy that works for everyone," Warren said in a statement. "Among the topics that came up was what would happen if Democrats nominated a female candidate. I thought a woman could win; he disagreed."

"I have no interest in discussing this private meeting any further, because Bernie and I have far more in common than our differences on punditry," she added.

A subsequent Washington Post report raised further questions about what was actually said.

"Two people with knowledge of the conversation at the 2018 dinner at Warren's home told The Washington Post that Warren brought up the issue by asking Sanders whether he believed a woman could win," the report said. "One of the people with knowledge of the conversation said Sanders did not say a woman couldn't win but rather that Trump would use nefarious tactics against the Democratic nominee."

Sanders adviser Jeff Weaver suggested to CNN that "their wires were crossed."

"I think there was a discussion about Trump, misogyny, sexism and politics and the difficulty of running in the era of Trump for women, the special challenges that women face in the era of Trump," he said. "But those conversations can sometimes get misconstrued."

"For anybody to say that a woman can't win, it doesn't make sense," he said. "Hillary Clinton won 3 million more votes than Donald Trump."

Rep. Tulsi Gabbard, D-Hawaii, also weighed in to offer her account of a private conversation she had with Sanders before announcing her presidential bid.

"We had a nice one-on-one conversation, and I informed him that I would be running for president," she said. "In that meeting, he showed me the greatest respect and encouragement — just as he always has."

The rift between the two candidates, who have avoided criticizing each other throughout the campaign, comes as they are set to face off at Tuesday's debate after the latest Des Moines Register poll showed Sanders and Warren in first and second place in the first in the nation state of Iowa, respectively. The week kicked off with a spat between the two candidates after Politico reported that the Sanders campaign gave volunteers a script to describe Warren as a candidate of the elite.

The script reportedly instructed volunteers to say that Warren's supporters were "highly-educated, more affluent people who are going to show up and vote Democratic no matter what" and that "she's bringing no new bases into the Democratic Party."

Warren told reporters that she was "disappointed to hear that Bernie is sending his volunteers out to trash me."

"Bernie knows me and has known me for a long time," she said. "He knows who I am, where I come from, what I have worked on and fought for and the coalition and grassroots movement we're trying to build."

Sanders denied that he approved the script.

The progressive activist group Democracy for America urged the two candidates to cool tensions and work together to defeat Trump.

"You both are progressive champs & our movement needs to see you working together to defeat your corporate Dem opponents — not attack each other," the group tweeted. "Progressives will win in 2020, but only if we don't let the corporate wing or Trump divide us."