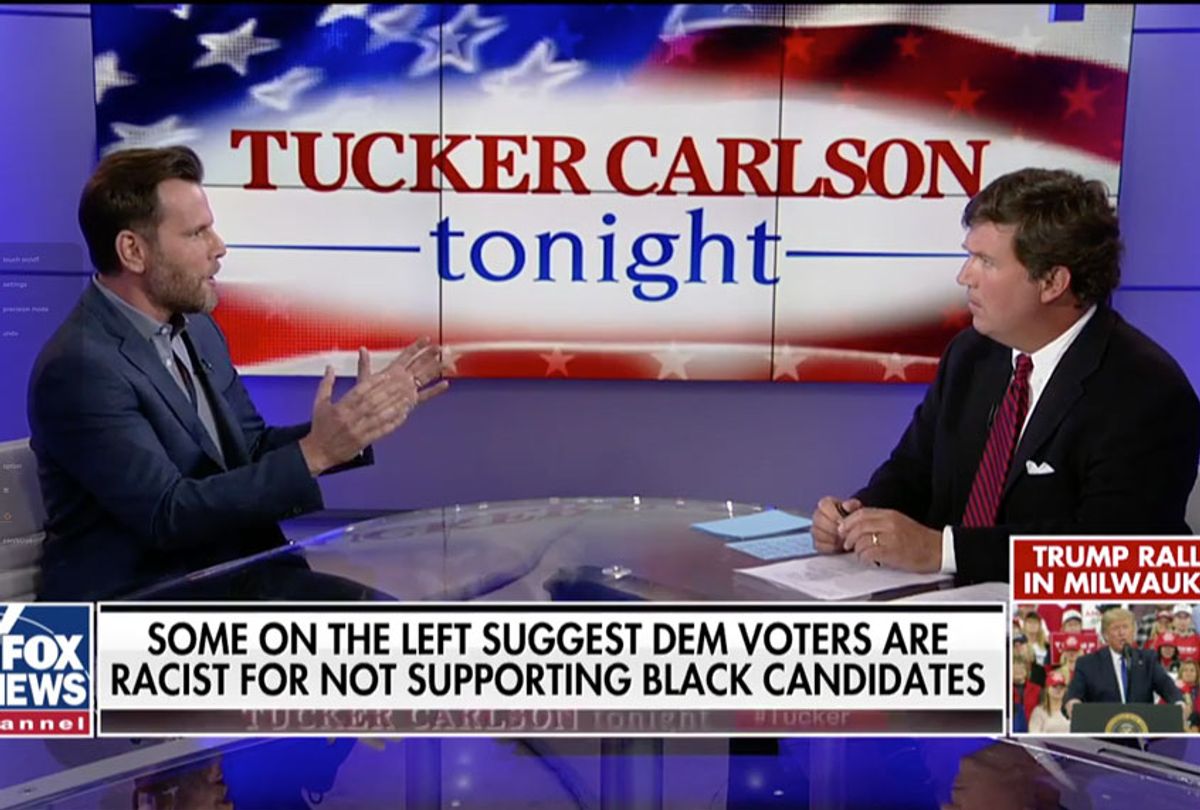 Fox News host Tucker Carlson, who previously made the false claim that white supremacy is a "hoax," has now suggested that Democratic voters are the real racists, in part by selectively mashing up commentary from left-leaning rival MSNBC.

"They're turning to the African-American electorate of the Democratic Party and saying you're bigots," Carlson said Tuesday on his primetime broadcast.

Talk show host Dave Rubin joined Carlson to make the case that media pundits believe Democratic voters, including the black members of their consituency, were racist for not supporting black presidential candidates.

"MSNBC is now putting up people to basically say, 'Forget those Republicans, and conservatives and Trump supporters that are racist, we're the racists.' Because in an hour from right now, there's going to be Democratic debate — I think it's on CNN — and guess what's going to happen? It's going to be all white people," Rubin told Carlson.

He added, "Thank God Elizabeth is 1/1,024 native American, or whatever it is. I don't know what happened to Andrew Yang. He should be in there, but his Asian-ness doesn't even count, right? Because Asian doesn't sort of fit into the intersectional calculator."

Carlson responded by claiming that  "if you want to be precise about it, they're blaming black voters."

Rubin concluded, "Nobody cares what your skin color is. Nobody cares what your gender is, or even your sexuality or any of these things. If you're an American and you live by the laws of America, and you work hard and and you try to better your life and your family's life, that's what this whole thing is about."

"Who is that guy that wanted his children not to be judged by the color of their skin but by the content of their character? That guy was kind of right," Rubin said. "That guy, MLK Jr., obviously, he was a liberal. He was a liberal, but the progressives have nothing to do with true liberalism. And there's a hilarity going on here, because for years they've been screaming that all of us, anyone who is not a woke intersectional progressive, is a racist. But what was going to be at the end of the road of that? At the end of the road is exactly what's happening right now. They would have to turn it on themselves."

Carlson spoke with Salon last year about why he does not believe that Americans should talk as much as they do about race.

"I would never make the case that racism doesn't exist, or it's not a factor. Of course it does and it is," Carlson said at the time. "But in the end, our racial differences or sex differences are immutable differences that can't be fixed. They can't be changed. They're set at birth, so it's not only counterproductive, but in my opinion, it is an intentional diversion away from conversations about things that we could potentially change, like tax rates. Those could be changed today by an act of Congress, and they're not changed, because the rest of us are having these fundamentally fruitless conversations — really at the direction of the people who are benefiting most from the status quo."

Watch the video below via Fox News: