RuPaul made his sitcom-starring debut with "AJ and the Queen," and we are not amused

Can drag queen realness fit into the traditional sitcom format? Perhaps, but this new Netflix series isn't it 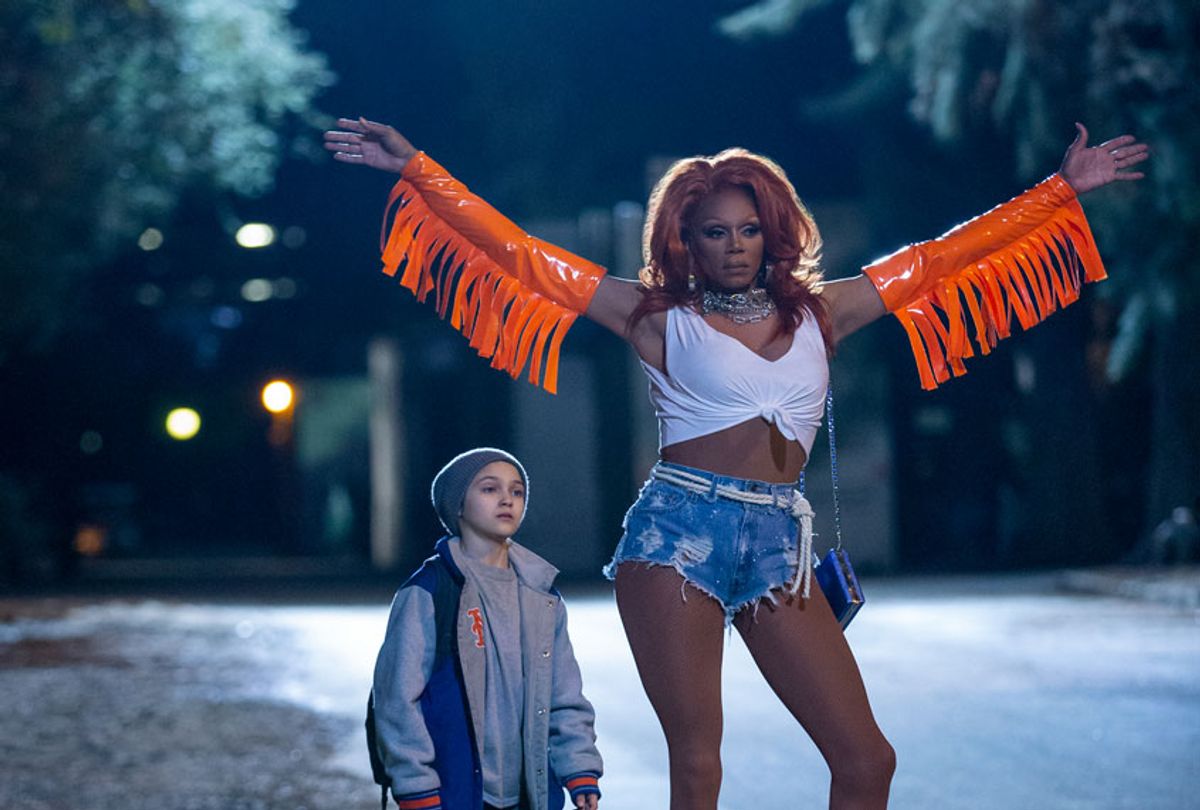 Izzy Gaspersz and RuPaul in "AJ & the Queen" (Netflix)
--

If you were speaking about "AJ and the Queen," the new Netflix sitcom anchored by RuPaul Charles, in generalities, it sounds like one of the most promising comedy series of the new year.

The whole show takes place on the drag performance circuit, as Robert, played by Charles, evades the wrath of his grifter ex-boyfriend. There's cattiness dripping in glitter and highlighter. There's music by Dolly, Cher, and Diana. There's a national network of hot, gay cops. There's the titular AJ, a tough-talking 10-year-old stowaway who finds a parental figure in Robert, and I'm an unapologetic sucker for films that focus their lens on intergenerational friendship like "Paper Moon" and "The Professional."

And while "AJ and the Queen" is definitely an endearing look at the man underneath the wigs — the series as a whole feels a little beneath RuPaul, whose status as a mainstream cultural icon is already decidedly solidified.

The series opens on Robert's last performance as Ruby Red in a dingy Manhattan venue where he got his start. He's finally earned enough money — over $100,000 — to open his own club, Queens in Queens, with his boyfriend, Hector (Josh Segarra, "The Other Two"). Their business partnership and blossoming romantic relationship is formalized with matching credit cards for club expenses. But when Robert wakes up the next morning, the account has been completely drained and the only address he has for Hector turns out to be a KFC. It turns out Hector is in league with Lady Danger, a villainess in an eye patch (Tia Carrere); the duo make a living off targeting "aging queens."

While battling his own despair, Robert meets AJ (Izzy G), the daughter of his drug-addicted neighbor who is in and out of jail for prostitution. Once AJ finds out that Robert intends to embark on a national drag tour, concluding with a pageant that has a massive cash prize, she sneaks onto Robert's vintage RV and convinces him to take her to live with her grandfather in Texas.

Don't get me wrong; "AJ and the Queen" can be a lot of fun. There are moments that are absolutely transcendently funny, like when Robert makes a stop at the Bob Mackie Museum (which is really more of a house with some dress forms intended to honor the brilliant costume designer) and slips into a dress worn by Diana Ross to perform a version of "My Endless Love" with the besotted museum owner.

But the series is riddled with scripting snags, potentially by virtue of trying to balance camp and commentary in hour-long episodes. There are attempts at wordplay that just do not land, leaving viewers cringing.

Meanwhile, Robert is charmingly unflappable, bordering on wry in his best moments, for much of the series. His introspective moments — in which he ponders aging, love, and identity — knit the series together.

AJ provides a nice foil for Robert's collected nature. She is a force! She's angry! She's mouthy! She delivers some of the most unexpectedly delightful lines in the series. My favorite is when, after Robert inquires how she acquired a wad of cash, she states without missing a beat that she "knocked over a claw machine in Bardstown." Her simple jabs and subtle flashes of anger work best; the overwrought jokes and tantrums she's asked to deliver misfire, pushing the character from precocious to obnoxious.

The gaps in the writing mean that some of the meatier threads, like Robert's issues with food (perhaps a nod to frequent jokes on "Drag Queen" that two Tic Tacs are a full meal) and AJ's decision to present as more masculine because "nobody messes with boys," are short-changed.

And it's those same gaps that make me wonder who this series is actually for. Despite the inclusion of many "Drag Race" alumni, it's a little too saccharine for fans of that show, but at the same time, it doesn't possess the laugh-tracked blandness to neatly fit in with other network or Netflix sitcoms, like "Fuller House."

The final episode of "AJ and the Queen" is arguably the strongest, which seems fitting. After all the  pageantry, we — the viewers and the lead characters —are left with an imperfect, but pleasant, commentary on loneliness, isolation, and a search for one's self.

"AJ and the Queen" is now streaming on Netflix.