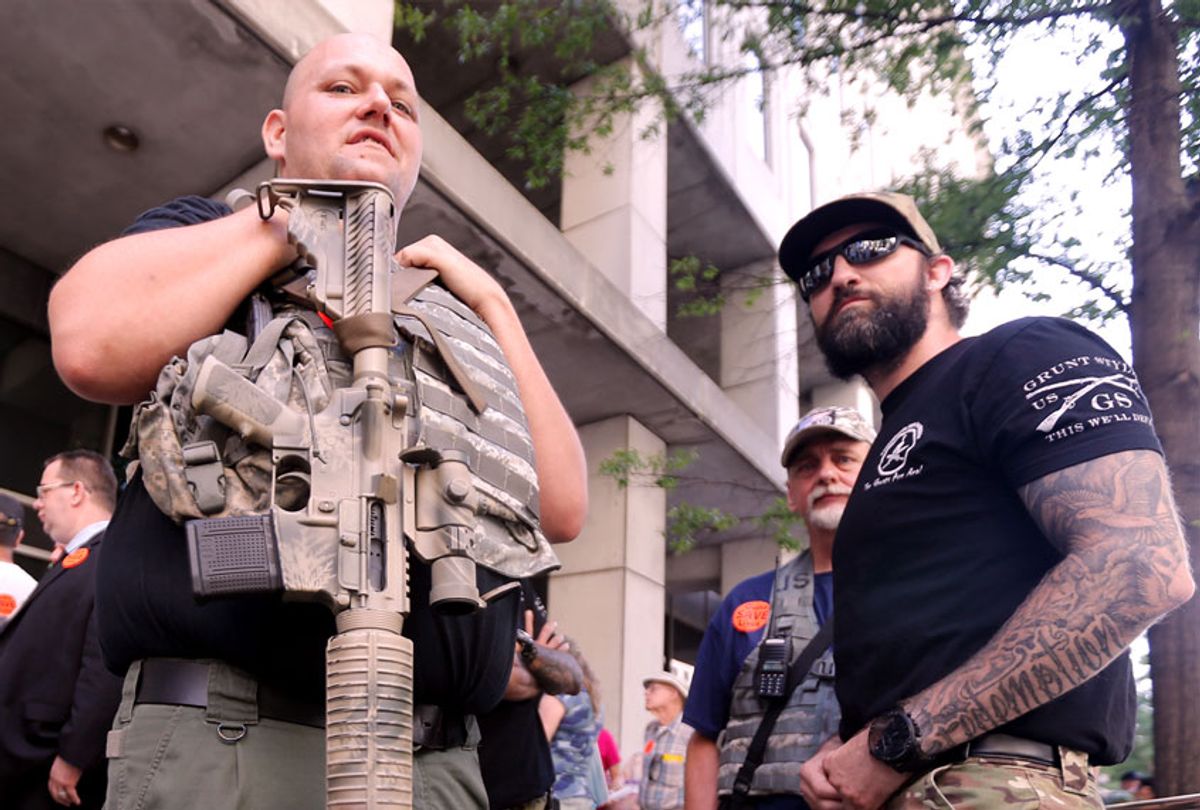 Buried under the cascade of serious national news Wednesday was the alarming story that Gov. Ralph Northam of Virginia had declared a state of emergency through next Tuesday evening in Richmond, the state capital. The declaration includes a ban on firearms and other weapons near Capitol Square, where the Democratic-led state legislature meets. Monday is a scheduled "lobbying day" for the Virginia Citizens Defense League, a far right pro-gun group, and Northam's office announced that law enforcement has "identified credible threats of violence surrounding the event, along with white nationalist rhetoric and plans by out-of-state militia groups to attend."

This announcement, if anything, downplays the severity of the situation on the ground in Richmond. In recent weeks, right-wing extremists, furious that Democrats have finally won control of Virginia's state house and plan to pass a series of rather minor gun control laws, have whipped themselves into a frenzy online, spreading outrageous rumors — such as claims that all self-defense training, even in martial arts, will become a felony — in an effort to stoke mass hysteria. There are real concerns that this could turn into another situation like the one that unfolded not far away in Charlottesville in the summer of 2017, when a white supremacist rally descended into a riot, resulting in multiple injuries and one murder.

Thousands of pro-gun fanatics are expected to descend on the Virginia state capital on Martin Luther King Day, and, until Northam's declaration of a state of emergency, clearly had expected to brandish weapons and look as menacing as possible to lawmakers who want to reform the state's gun laws. Many have taken to social media, saying they are showing up armed anyway and promising a "boogaloo," which is far-right code for an armed insurrection against the government.

"What is happening in Virginia is not activism. It's extremism," Shannon Watts, the head of gun safety group Moms Demand Action, told Salon. "It's a last-ditch attempt by gun extremists to intimidate lawmakers out of what voters elected them to do."

Three reported neo-Nazis have already been arrested by the FBI before they could show up in Richmond armed and excited for what they hoped was a coming race war.

Graphic sexualized slurs were the prevalent theme of much of this harassment, with conservatives instructing her to "f*ck yerself with a broken beer bottle", sending sexualized images, and arguing that "REAL Americans" are those with "a cock and balls."

This kind of over-the-top misogyny is, not surprisingly, being accompanied by an absolute barrage of violent fantasies from the gun lovers who plan to descend on Richmond on Monday.

As Will Sommer of the Daily Beast reported Wednesday, "Far-right internet personality Joshua Shoaff, who has more than 540,000 Facebook fans," argued on a livestream last week that Northam should be "walked up to the steps of a swinging rope that's placed around your neck, because you, sir, are a tyrant and you're committing treason."

Shoaff has already been banned from carrying firearms in the city of Charlottesville for the role he played in the riots there, but when contacted by Sommer, he stood by his claim that legislators who support gun control should be murdered.

"It's really not a surprise that years and years of bombastic rhetoric about the need for the Second Amendment to protect us from our government has turned into this event on Jan. 20," Watts remarked.

The group organizing the event, the Virginia Citizens Defense League, is run by Philip Van Cleave, who garned headlines for his outrageous behavior in the Sacha Baron Cohen show "Who Is America" that aired in 2018. Van Cleave can be seen in the clip supporting the idea of arming children as young as 3, and suggesting that since young children haven't developed a "conscience" yet, they would make "very effective soldiers." He bragged about how "we killed the bill" that would have banned children ages 4 to 12 from accessing weapons. (After the clip aired, Van Cleave tried to wiggle out of the controversy, by claiming he had just been playing along with Cohen.)

The timing of this rally on MLK Day is, of course, eyebrow-raising, as many of the people hyping it are blatant white nationalists. Virginia Citizen Defense League, unsurprisingly, claims innocent motives in choosing this day for its annual pro-gun rally, saying that "date is picked because it is a federal holiday, which allows more gun owners to be able to come." But given that King was assassinated in 1968 by a gun-wielding right-winger, it's hard to imagine there was no ulterior purpose in using this day as one where gun-wielding right-wingers celebrate themselves.

Indeed, it appears Van Cleave is eager for the racist subtext of gun-nut culture to become more blatant, and begged attendees to avoid making the rally "about flags, statues, history, etc."

The social media chatter, in the wake of Northam's crackdown on bringing weapons to the Capitol, has also been alarming. There are outright calls for gun owners to defy the law and bring guns anyway in an effort to provoke a confrontation with law enforcement. One popular set of images being circulated instructs attendees to bring not just rifles but "the appropriate amount of loaded mags," with the recommendation being three to six magazines of ammunition. The fact that guns are banned from the area is unimportant, the image reads, since "that's what civil disobedience has always been about."

"I can't outright tell you to risk careers, jail time, and reputations," the images read, adding, "We have to stick our necks out and make a stand."

Even though the Virginia Citizens Defense League is officially instructing people to obey the law, social media around the rally is a swamp of right-wing paranoia, theorizing about how to game the situation, and making excuses in advance for potential violence. On the official rally event page, one user suggested that, if attendees aren't allowed to bring their guns to the Capitol grounds, they should "surround the grounds" and "form a perimeter."

Another poster argued that this was giving too much ground, writing, "you can be armed anywhere you want" and saying that if enough people entered the perimeter with guns, "there would be nothing Northam could do" to stop them.

Other posters insisted that Northam has no legal authority to bar guns from the area, claiming that their personal safety would be at risk if they attended this event unarmed. Plenty of posters were inventing pre-emptive conspiracy theories to claim that any violence that happens will be the result of liberal or "deep state" conspiracy.

"The only reason a government would try to disarm you is because they plan on doing something you would shoot them for," one poster on a popular page for the event on Facebook said.

"Look out for a false flag where shooting starts (i'm guessing an unseen sniper)," another said, arguing, "They know the 2nd Civil war is inevitable at this point, so they want it to start on their terms under their narrative."

Another shared a mocked-up "Wanted" poster with Northam's face on it.

Even though the National Rifle Association is not associated with this particular rally, Watts felt the NRA should not be allowed to escape accountability for the seriousness of the situation. The nation's dominant pro-gun lobby has blanketed Virginia with billboards falsely accusing Northam of a "gun confiscation plan." The NRA has also supported a movement by Republican-controlled rural counties in Virginia to declare they are "gun sanctuaries" that will refuse to enforce state level gun restrictions.

There's certainly room for hope that, for all the chest-thumping from gun nuts, this Richmond rally will peter out without any real trouble. Unlike the white supremacists who descended on Charlottesville a few years ago, who tended to be much younger on average than conservatives generally, the radical gun-loving world tends to be on the grayer side. No matter how many memes suggest they are seeking a violent confrontation, these people are probably not inclined to provoke situations where they're likely to get arrested or injured. It's easy to talk big on social media, but most will likely chicken out before trying to bring weapons into a heavily barricaded and policed gun-free zone.

Just as important, the far-right's eagerness to riot in the streets has dimmed considerably since Charlottesville. What they thought was going to be a mighty show of force that summer mostly exposed the alt-right as a pack of misfit, racist losers, and subsequent rallies were poorly attended. There have been a few recent incidents of violence, but so far the right has avoided rioting again to avoid another wave of negative attention.

Still, the rally is something to keep an eye on, since its original purpose was to use physical initimidation to override the will of a clear majority of Virginia voters. Polling data shows that strengthening gun laws was a major issue in the 2019 election that finally gave Democrats a legislative majority. This isn't surprising, as Virginia has been the site of multiple gruesome mass shootings, including the 2007 Virginia Tech shooting that left 32 dead, the 2010 Appomattox shooting that left eight dead, and last spring's Virginia Beach shooting that left 12 dead.

Helping lead the pack of Democrats passing the gun laws is Del. Chris Hurst, a former journalist who ran for office and beat an NRA-backed incumbent after his girlfriend was murdered live on-air by a disgruntled coworker. In the face of so many  tragedies, it's unlikely that Democrats will be moved from their determination to pass these gun laws.

"These gun extremists have been fooled into thinking their guns are going to be taken away," Watts said. "But our movement is fueled by moms who fear their children be taken away."