In a press conference for her upcoming Hulu series, Secretary Clinton weighs in about this mean political season 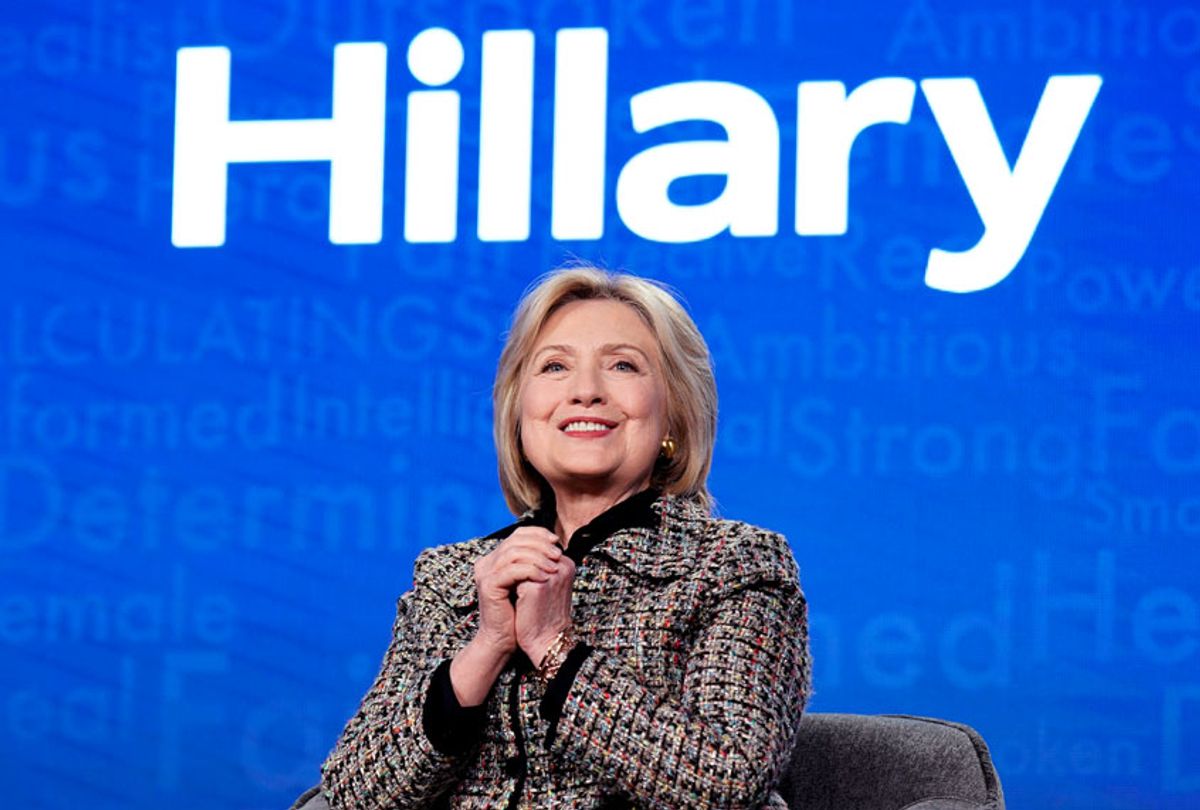 For millions of Americans and people around the world, there is absolutely nothing Hillary Rodham Clinton can say or do to persuade them that "what you see is what you get," as she says in Nanette Burstein's four-part documentary series "Hillary."

Nevertheless, Clinton is doing her best to clarify and counter as many inaccurate perceptions people may have about her, whether by way of this new and very candid biography or in her personal appearances.

That much was plain to see when the former Secretary of State appeared alongside the series' director on Friday morning, as part of Hulu's day of presentations at the Television Critic Association's Winter Press Tour, currently underway in Pasadena, California.

The upbeat Clinton was in a good mood, joking with a roomful of critics while fielding questions about the documentary as well as her view of the state of politics and history, both as a person who continues to affect each of those things, intentionally or otherwise, and as an observer.

"There was nothing off limits," Clinton told critics, explaining that even moments where the camera catches her while she's putting on her makeup were accepted to be part of the drill.

"Hillary" began as a campaign documentary that yielded around 1,700 hours of behind-the-scenes footage, taken by members of Clinton's team. But after her wrenching loss in 2016, Burstein proposed that there was a story within footage that needed to be explored about her campaign and her career's place in women's history and advancement, and illuminates why she made certain choices.

"Hillary" interweaves Burstein's interviews with those scenes, in addition to archival photos and footage of the young Hillary Rodham, and closely examines her life and influence, starting from childhood and moving onward into the present.

Many documentaries have chronicled the Clintons' political career, but Burstein's seeks to be a deep dive into who Clinton is, exploring her vulnerabilities, her accomplishments and her hardest moments, showing how she broke through or was bested by the obstacles placed in her path. As First Lady she was vilified for being a feminist and for standing by her husband, then-President Bill Clinton in the wake of his infidelity, which led to his 1998 impeachment.

As Secretary of State, she inspired the right-wing media and conservatives to criticize her for failing to prevent the 2012 attack of two United States government facilities in Benghazi, Libya, by Islamic militants that left four Americans dead, including two diplomats. Multiple official investigations found that neither she nor any other officials in the Obama administration acted improperly, yet the blame still follows her.

During Donald Trump's administration, she and Bill Clinton have been baselessly accused of all manner of ridiculous crimes and schemes, ranging from Pizzagate to taking part in an alleged conspiracy to murder convicted sex offender Jeffrey Epstein.

"I became a kind of Rorschach test for women and women's roles as soon as I burst onto the public scene, when Bill was running for president," she said. "You know, I lived for more than 40 years before that. And I had no real understanding of what it meant to be thrust into the highest, brightest platform and try to live your life and, and kind of go along with what you'd always done."

Clinton remarked that in making "Hillary," Burstein includes moments from Clinton's life that she had forgotten, such as footage of her being burned in effigy in reaction to her effort to create a system of universal healthcare during her husband Bill Clinton's first term in office.

"Little did I know that it would create the most extraordinary backlash that the First Lady would be involved in trying to make sure everybody had quality, affordable healthcare in our country," she said.

Making "Hillary" required Clinton to sit for 35 hours' worth of interviews, winnowed down to serve as the backbone of Burstein's four-hour work. And the version of Clinton seen live and in person isn't different from what she reveals to the camera, whether in this documentary or other more recent appearances.

In October Clinton and her daughter Chelsea did the talk show rounds in support of their co-authored work, "The Book of Gutsy Women: Favorite Stories of Courage and Resilience."  Both then and now, Clinton displayed a level of self-awareness as to what she could have done differently to connect with voters.

On Friday she explained that Burstein's work enables her to see herself even more clearly through what she said were "a lot of humbling moments."

"One was the recognition that I have been often in my view. . . mischaracterized, misperceived, and I have to bear a lot of responsibility for that. But whatever the combination of reasons might be, I certainly didn't do a good enough job to break through a lot of the perceptions that were out there," Clinton said.

"So that was a constant recognition to me because, you know, it was quite common for people who knew me, worked with me, worked for me, were colleagues of all sorts, to shake their heads at the way I was portrayed. And I would just kind of blow it off, brush it off and not think about it."

The intense process of making "Hillary, she added, made her realize that "perhaps I could have and should have found ways to better present myself or deal with some of the misperceptions that were out there."

That said, Clinton firmly states that she doesn't subscribe to the double standard that applies to women with regard to the so-called "likability" factor.

"I am certainly in the camp that believes that the more women who get out there, whether it's politics or entertainment or journalism or anything else, the more we should realize that women have the same rights, they have a full range of emotions and approaches to how they make decisions," she said, "so that we can begin to put that on a shelf and leave it there."

Clinton also expressed her hope that Americans passionately participate in the 2020 presidential election, despite any feelings of disillusionment over what happened to her in 2016 and each year that has passed since then.

"I want people to take their vote really, really seriously," she said, "because Lord knows what will happen if we don't retire the current incumbent and his henchmen, as Nancy Pelosi so well described them yesterday."

The series heads to Sundance and the Berlin Film Festival before premiering on Hulu on Friday, March 6. As Clinton herself pointed out in answering a question posed to her, that's right in the thick of Super Tuesday. Four primaries will already have occurred.

Asked what she hopes "Hillary" will add to the political conversation and what she hopes voters will take away from watching the series, Clinton responded with care tinged with optimism.

"I am on the side of an inclusive, generous, open-hearted country that faces up to the future, tries to bring people together and make difficult choices, of which we have many, facing us," she said. "And . . . we're in a real struggle with a form of politics that is incredibly negative, exclusive, and mean-spirited."

She continued, "It's going to take every voter, not only people who vote in democratic primaries, to recognize that, you know, this is no ordinary time. This is an election that will have such profound impact. Take your vote seriously and for the democratic voters, try to vote for the person you think is most likely to win at the end of the day. That is what really matters."

"And not just the popular vote," Clinton stressed, "but the electoral college."