"I speak the truth": GOP's Martha McSally refuses to apologize for calling reporter a "liberal hack"

"She's in the middle of a very difficult re-election race, and she's using that exchange to fundraise" 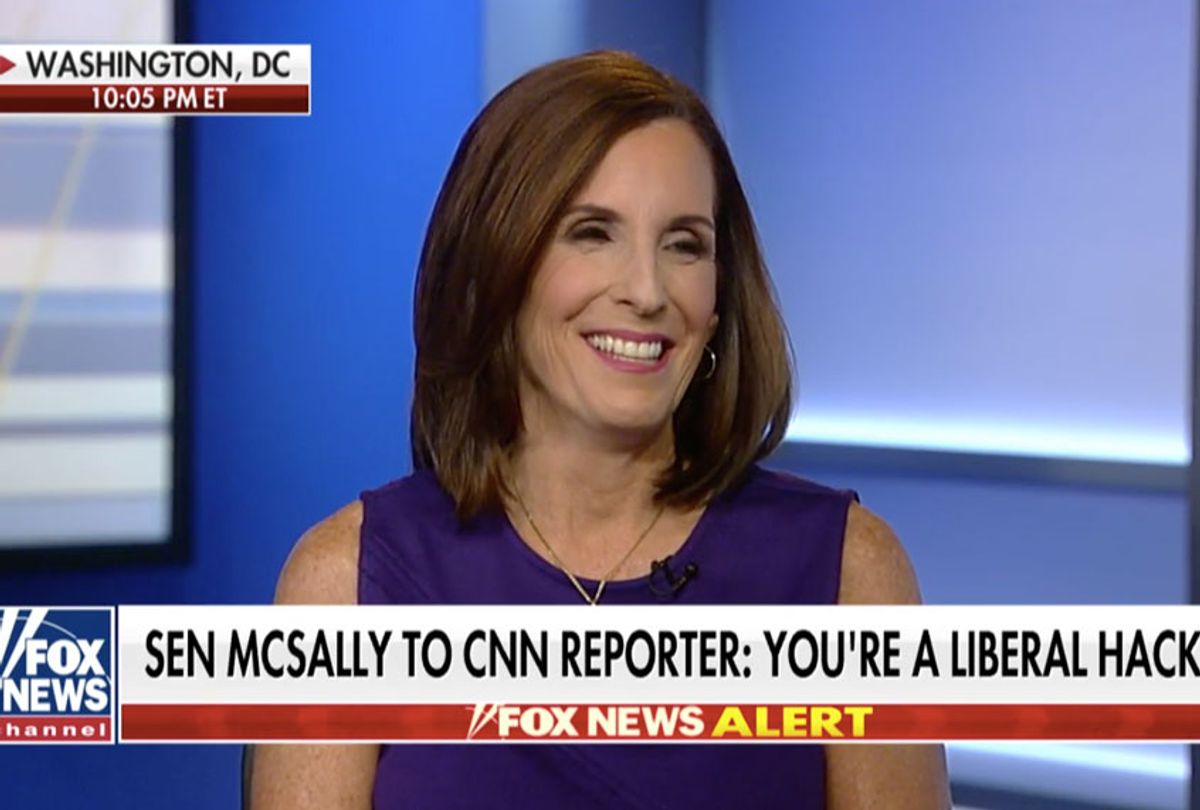 Sen. Martha McSally, R-Ariz., refused to apologize Thursday for calling CNN reporter Manu Raju a "liberal hack," falsely claiming to Fox News host Laura Ingraham that she had simply "called it like it is."

"I speak the truth," McSally claimed on the right-leaning network. "I'm going to continue to do it. I've done it my whole life."

However, McSally did not "speak the truth," and the motivation behind her insult was called into question after she began to fundraise off of the viral exchange. Raju, who is the senior congressional correspondent to the network, has no record of partisanship.

Laughing as Ingraham played the clip of her insulting Raju, McSally said that she had no regrets.

"I said it again, actually, as I went in. I said, 'You're a liberal hack, buddy.' As you know. I mean, as you know, these CNN reporters — but many of them around the Capitol — they are so biased. They are so in cahoots with the Democrats," McSally falsely claimed. "They so can't stand the president, and they run around trying to chase, you know, Republicans and ask trapping questions. I'm a fighter pilot, you know. I called it like it is."

After alleging that Republicans are vilified by the mainstream media on a daily basis, McSally claimed that CNN reporters treat Democratic senators differently.

"The Democratic senators walk by, and they say, 'Hi, how are you today?' And then they chase after the Republicans," McSally alleged. "I mean, it's honestly ridiculous. As you know, they're cheerleading Democrats. They hate the president."

During the incident in question, Raju did his job. He asked McSally as she walked to her office on Capitol Hill whether she believed the Senate should consider new evidence as part of the impeachment trial.

"You're a liberal hack," McSally replied. "I'm not talking to you."

After Raju asked her to confirm that she was not going to talk about it, she reiterated: "You're a liberal hack."

McSally was criticized by many in the media for ignoring a legitimate question in an apparent attempt to invalidate Raju's right to ask it.

CNN's Chris Cuomo commented that "we see the play now. The question was obvious. So was the dodge. So was the disrespect. All textbook Trump. It's more proof of what this is all about. And here's more proof just from her of playing from the Trump playbook: Forget about apologizing, she's trying to raise money off the mockery."

Wolf Blitzer, while interviewing Raju on CNN, also noted that "instead of answering a fair question, she simply called you a 'liberal hack.' It was disgusting. It was awful. She should know better. Certainly, you're one of the most respected congressional reporters up on Capitol Hill. Walk us through what was going through your mind at that time."

Raju replied that "a key question that I have — and a lot of reporters up here have — is about whether or not senators will agree and vote to actually allow that new evidence to come forward. And Martha McSally, as you could see Wolf, did not want to talk about it. Also, she's in the middle of a very difficult re-election race, and she's using that exchange to fundraise for her campaign."