Getting jiggly with it: The curious community that's grown around gelatinous creations 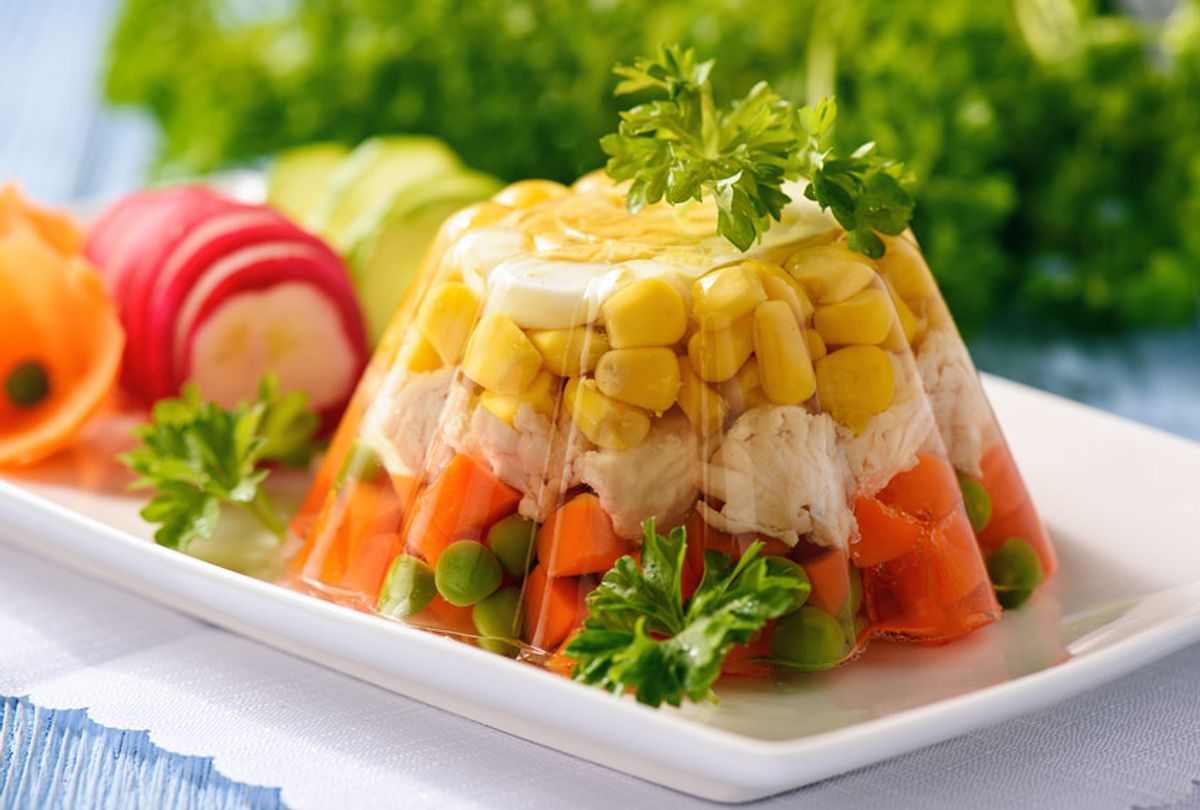 Ken Albala is an aspic influencer. It all began with a dare, he says, from a friend who had seen this Facebook group called "Show Me Your Aspics," dedicated to molded gelatin creations. After sending Albala two invites to the group that were promptly deleted ("Based on the title" he explains), they finally sent a message: "Make an aspic, I dare you and post it there."

It's not like Albala is a stranger to the kitchen. He is a history professor at the University of the Pacific where he teaches about the intersection of civilization and food and has authored or edited over 25 books on the subject including "Eating Right in the Renaissance" and "Food in Early Modern Europe."

"Besides, someone dares me, I have to do it," Albala said. "And it turns out I was pretty good at it. I made another, and then another and figured out how to put things in there without using, you know, Jell-O mixes and without following old kitchen recipes — although a lot of people in that page do that — and somehow just sort of rose to extraordinary acclaim within that page."

Pictures of Albala's gelatin forms — like a recent pink rosé Champagne and a shell stock cream reduction poured around a full lobster tail and set in a lobster-shaped mold — now garner thousands of likes on Facebook. There are two fan pages dedicated to his recipes and for many, like me, he is something of a Virgil figure through the weird, wild world of the online aspic community.

It's a surprisingly well-populated community, too; "Show Me Your Aspics," which was started in December 2016, has nearly 36,000 members. It's especially impressive considering that aspics (which are traditionally savory), Jell-O salads, and the like aren't currently a well-loved mainstay in many modern kitchens.

"Aspics sort of regularly come in and out of fashion," Albala said. "They were very fashionable in the late Middle Ages, then early Renaissance, then went out of fashion."

"Then they come back with a vengeance in the middle of the century, especially when Jell-O becomes popular and it's very easy for anyone to do," Albala said. "And then they go completely, utterly out of fashion — so 'out' that people find them revolting now."

The fact that aspics are mildly repelling in person actually seems to be part of their online appeal — almost like a wrinkly, flat-faced dog or Adam Driver, they are so ugly they're cute. Danielle Curran, a member of several aspic-themed Facebook groups, says she had always been fascinated by vintage foods, especially grotesque recipes like the "crab centipede."

"It was something my friends and I had in common in college," Curran said. "We would just spend an evening looking at bad vintage recipes, and that really exposes you to the idea of elaborate gelatin dishes."

She continued: "I think like, four years ago I thought I'd try and make some of my own, and they almost never taste good. — I've always hated Jell-O, to be honest. They're really more of an experiment, or an art piece. When I'd post them to my instagram, my friends would find them really funny."

With that statement, Curran taps into one of the more unexpected features of online aspic culture. While there are hyper-specific sub-groups like Chickens Eating Aspics (which is exactly what it sounds like), there seem to be two main camps: people who view aspics and molded gelatin as genuine opportunities for creative culinary endeavors, and those who approach making them with kind of a wink.

In the wake of such pro masterpieces, amateur jelly makers chime in with their own creations: raspberry suspended in a clear, prosecco-filled mold; algae jello with lychee and coconut milk; carbonated rose lemonade with strawberry, blackberry, and raspberry-infused rum. By and large it's a surprisingly supportive group, wherein members really are just trying to push their culinary limits.

As one commenter said under a picture of horchata with mango jelly, "I'm pleased that this group is not all about mocking aspics," to which another commenter replied, "Does that offend you?"

It seems that, as with any sizable fan group, there has been some infighting among online aspic-enthusiasts, which is how another group, "Aspics With Threatening Auras" was formed.

"Yeah, that's a break-off group from that 'Show Me Your Aspics,'" Albala explained. "Apparently they had a falling out. Some people thought you can't put things on there unless they're actually Jell-O, so they broke off."

"Aspics With Threatening Auras" is still made up of creators; they just sometimes suspend non-food objects — like cigarette butts or false teeth — in gelatin or present weird flavor combinations like Spaghetti-O Jell-O. Scanning through the pages, there's lingering evidence of feuds from long ago and freshly blocked individuals.

There's some overlap between the groups, too. Weed gummies, for example, seem to be a great unifier, as are aspics for pets.

"The weirder, the better," said "Show Me Your Aspic" member Cassandra Bradshaw. "I've made a watermelon baby aspic, pineapple-Spam jello and the one that blew up was the hot dog jello — it was for a dog's birthday and they loved it. It's weird and gross, and that's kinda what I love about it."

The membership of both groups, as well as some newer online communities, is continuing to grow. Albala credits this, in part, to a kind of cyclical, cultural view of science and foods that we view to be unnatural.

"In the past 20 years or so we've been very against all the things that we know that science did wrong to our food supply, from agriculture to processing, to chemicals, to additives," he said. "And so we've gone through a period of really craft and artisanal and local and sustainable and homemade and from-scratch. And I have a weird feeling we're about to come out of it."

In his mind, aspics and bizarre gelatin creations seem to be an early sign of this shift.

I think there's something to be said, as well, for current views on domesticity and stereotypical gender roles in the home; as those are in flux, it makes sense that people would want to subvert a food item that seems so trapped in mid-century Americana.

But then again, maybe I'm just overthinking it.

When I asked several members of the group about their motivations for joining, more than one simply responded: "I'm just here for the jiggle."