Cities in the crosshairs are pushing back against nuclear weapons

“We forget that all power is local. And by forgetting to act locally, we are giving away all the power.” 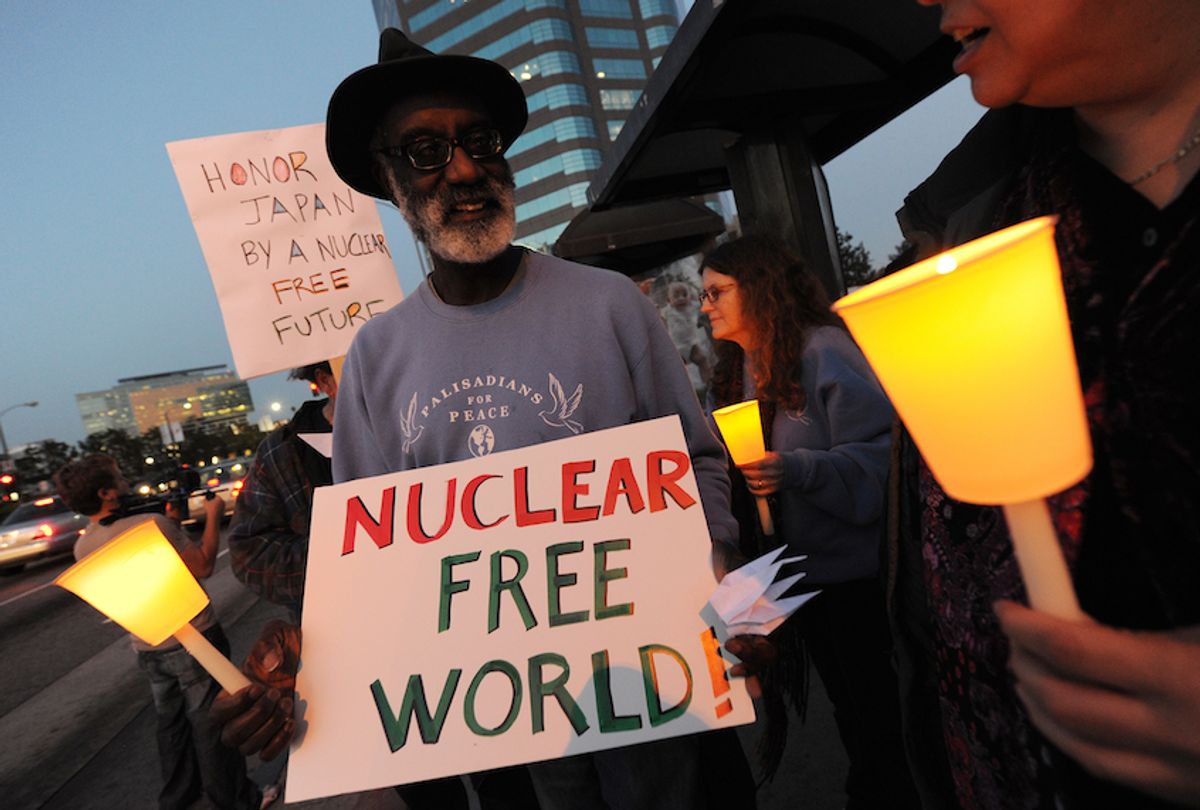 Anti-nuclear demonstrators hold a candlelight vigil to protest against nuclear power outside the Federal Building in Los Angeles on March 28, 2011. (Mark Ralston/AFP via Getty Images)
--

Panicked responses to the erroneous text alert — which read "BALLISTIC MISSILE THREAT INBOUND TO HAWAII. SEEK IMMEDIATE SHELTER. THIS IS NOT A DRILL" and was accidentally issued on January 13, 2018, to Hawaii residents via the Emergency Alert System and Commercial Mobile Alert System — revealed how believably close nuclear fears hover to our everyday life.

And now two years later, at the beginning of 2020, those fears have grown even stronger following a year in which talks aimed at denuclearizing the Korean peninsula faltered, fears of a nuclear clash between India and Pakistan spiked, and Russia announced it had deployed its first hypersonic nuclear-capable missiles.

Meanwhile, the U.S. abandoned the Intermediate Nuclear Forces treaty and continued to undermine the Joint Comprehensive Plan of Action (Iran nuclear deal) after it unilaterally withdrew in 2018. Now, many fear the U.S. will likely withdraw from the Open Skies and New START treaties.

As the U.S. modernizes its nuclear arsenal at a cost that could exceed $1.5 trillion and the other eight nuclear armed states upgrade their own nuclear weapons, ordinary citizens and the leaders of cities, towns, and municipalities around the world are resisting nuclear weapons through efforts like the Back from the Brink campaign and the International Campaign to Abolish Nuclear Weapons' #ICANSave Cities appeal.

Cities turn back from the brink

Across the U.S., cities like Seattle, Albuquerque, Colorado Springs and others are located near key military installations, which some see as a good reason to oppose nuclear policies. Today, more than 40 U.S. cities including, Philadelphia, Salt Lake City, Los Angeles and Honolulu have adopted a Back from the Brink resolution, which puts forward five policy goals aimed at reducing the threat of nuclear war: no first use of nuclear weapons, end sole authority to launch a nuclear attack, take U.S. nuclear weapons off hair-trigger alert, cancel modernization/replacement of the U.S. nuclear arsenal, and ultimately seek the elimination of nuclear weapons.

Back from the Brink aims to prompt cities, counties, and local governments to pressure Congress and the Trump administration to adopt the above five points.

Dozens of smaller cities from Portsmouth, New Hampshire, to Arcata, California, have adopted the resolution, as have local and state governments across the U.S. More than a dozen more cities (Little Rock, Chicago, Madison) and states (New York, Vermont, Washington) have proposed resolutions.

In a joint article, three councilmembers representing Washington, D.C., Baltimore, and Montgomery County, Maryland, wrote, "As leaders of the Greater Washington area, home to the seat of our federal government and headquarters of its military — we are particularly at risk. We are living in the crosshairs of America's enemies, both hostile governments and terrorists." That risk, and the financial costs associated with nuclear weapons, led all three communities to adopt Back from the Brink resolutions.

Across the Potomac River in Arlington, Virginia, Colleen Moore, digital engagement manager at Beyond the Bomb, calls nuclear weapons "issue zero" because, if they are ever used, she says all other social movements would be voided in the face of possible annihilation.

Beyond the Bomb partners with half a dozen or more like-minded organizations seeking to reduce the threat of nuclear war by advocating for local government resolutions and divestment from nuclear weapons industries. To that end, Beyond the Bomb works to advance the Back from the Brink resolution and a second resolution which calls for Arlington County to divest all county operating funds from financial institutions or other entities that have invested billions of dollars in arms manufacturers like Lockheed Martin, Boeing and General Dynamics.

"Arlington can and should instruct its asset managers to remove its holdings from fossil fuel and weapons companies, and abandon those asset managers that will not," Moore says.

Getting politicians to take a stand against nuclear weapons in the county that is home to the Pentagon and the world's largest weapons manufacturersis no small feat, but Moore says a number of county board members have expressed their initial support.

"Specifically with Arlington, it's a really important way to tell the people across the river in D.C. that the people who live right here do not want this [nuclear weapons] build up," Moore says.

She explains that when a local government passes a resolution on nuclear weapons policy, it demonstrates citizen resolve in a way that legislators can't easily dismiss.

One of the simplest and most meaningful ways people can get involved, Moore says, is to write a letter to their local newspaper explaining why they want their local officials to sponsor city or county resolutions and why their congressional delegation should support policies such as no first use.

Nuclear weapons are not part of our plan

In Iowa, a state that has suffered severe flooding in recent years, Des Moines Mayor Frank Cownie says the two existential threats facing humanity are climate change and nuclear war. And while he says his city may not be an obvious nuclear target, as mayor in a state where agriculture is central to life and the economy, he says it's important to recognize how these threats overlap. To deny the threat of nuclear weapons, he says, is similar to denying climate change.

"These weapons are designed to … wipe a city off the face of the planet," says Cownie, noting how no place would remain untouched by post-nuclear environmental catastrophe. He says the threat of nuclear war needs to be put on the front burner.

Cownie serves as U.S. vice president for Mayors for Peace, which represents more than 7,800 cities in over 160 countries. Since 2006, the group has annually and unanimously adopted resolutions denouncing nuclear weapons. Cownie told Truthout that as mayors, "We think about the needs of all of our population and how we make life better for everybody and it doesn't include war."

Addressing mayors whose communities host businesses or industries that directly or indirectly support the production or storage of nuclear weapons, Cownie says, "We need to move beyond nuclear weapons. We need to look at the future of jobs and life on this planet and we ought to be looking to take our communities into the 21st, 22nd century and think about what resources are going to be on this planet at that time."

Preventing what cannot be cured

Across the country, in the U.S.'s second-largest city, Alex Jasset, nuclear threats program associate with Physicians for Social Responsibility — Los Angeles (PSR-LA), tells Truthout that PSR-LA was founded with the understanding that there is no adequate medical response to a nuclear attack.

Jasset says that by building diverse coalitions, it's possible to educate city councilmembers on nuclear weapons-related issues with the aim that their city will adopt the Back from the Brink resolution. He points to Massachusetts, where more than a dozen resolutions have been passed; a commitment, he says, can grow into support at the state and federal level.

To those who argue that nuclear policy is not the domain of local government, Jasset counters that ultimately, a city official's primary responsibility is the safety and well-being of its own citizens.

"If a nuclear strike were to happen, they would be the ones that would be responsible for their community first," Jasset says. "If you can't adequately defend your citizens, then it is your job and your duty to speak up and let other people know that they should be doing that."

PSR-LA supports a just transition for communities where people are dependent on the nuclear weapons industry so that they can adopt healthier, more sustainable industries. Jasset says that in calling for an end to an industry it views as harmful, it's also important to support new employment opportunities, but he adds, "It is difficult because the nuclear weapons industry does, in some ways, have an outsized stake in terms of academia, in terms of defense contractors, and there's a lot of power that comes with that."

"Ultimately, what it comes down to for us is that there are people behind this movement. It isn't just money," Jasset says. "There are people who are standing up and saying, 'This is enough. My tax money has been going to pay for these weapons for decades and I don't want that to continue."

I can save my city

Based in Geneva, Switzerland, the International Campaign to Abolish Nuclear Weapons (ICAN) launched its #ICANSAVE cities appeal in 2018, calling on cities large and small around the world to formally support the 2017 U.N. Treaty on the Prohibition of Nuclear Weapons. The ban treaty, currently ratified by 34 nations, will enter into legal force once 50 nations have done so.

ICAN Executive Director Beatrice Fihn says that while, for many people, nuclear weapons can feel abstract and theoretical, it's important to remain focused on their fundamental purpose.

"What these weapons really are made for is to wipe out whole cities. These are not precision guidance that will take out a specific military facility," Fihn told Truthout. "We are so obsessed by staring at these world leaders, we forget that all power is local. And by forgetting to act locally, we are giving away all the power."

Fihn says it's important for people to focus on local matters, things and places that people deeply care about — cities, surroundings — the places that would be targeted in a nuclear war.

Currently, the #ICANSAVE appeal includes cities from at least 11 countries that either possess nuclear weapons (U.S., U.K., France) or host or support nuclear weapons (Italy, Belgium, Germany) through military cooperation. According to ICAN, these nuclear weapons-endorsing states(like Poland, Norway and Romania) are obstructing progress toward the elimination of nuclear weapons.

Your voice is needed

Daniel Högsta is a campaign coordinator with ICAN. One of his primary efforts is the #ICANSAVE appeal, which has been inspired by efforts of cities to take climate change action when national governments have failed to act.

Besides joining the #ICANSAVE cities appeal or adopting a resolution, Högsta says cities can, for example, identify and divest from pension funds that support nuclear weapons production and find alternative industries which can be equally profitable.

The point is not to devastate local economies, but rather to identify where changes can be made away from weapons that are demonstrably a threat to all communities. "This is not a good long-term investment for our community to be in," Högsta says.

One of the strengths of the cities appeal, Högsta says, is that no matter how small a municipality is, they can contribute in a meaningful way that impacts national policy.

By endorsing the #ICANSAVE appeal or adopting a resolution, Högsta says, even the smallest town can demonstrate the disconnect between the positions of citizens and governments.

When a major city, especially a capital like Paris or Washington, takes a stance that is contrary to national government policy, it presents a very powerful testament that can motivate citizens, politicians and policy makers.

"Similar to climate change, cities have a role — an obligation," says Högsta. "Having a voice on this is absolutely crucial."