How mathematics can save your life

In “The Math of Life and Death,” Kit Yates shows how mathematics is crucial to understanding everything we do 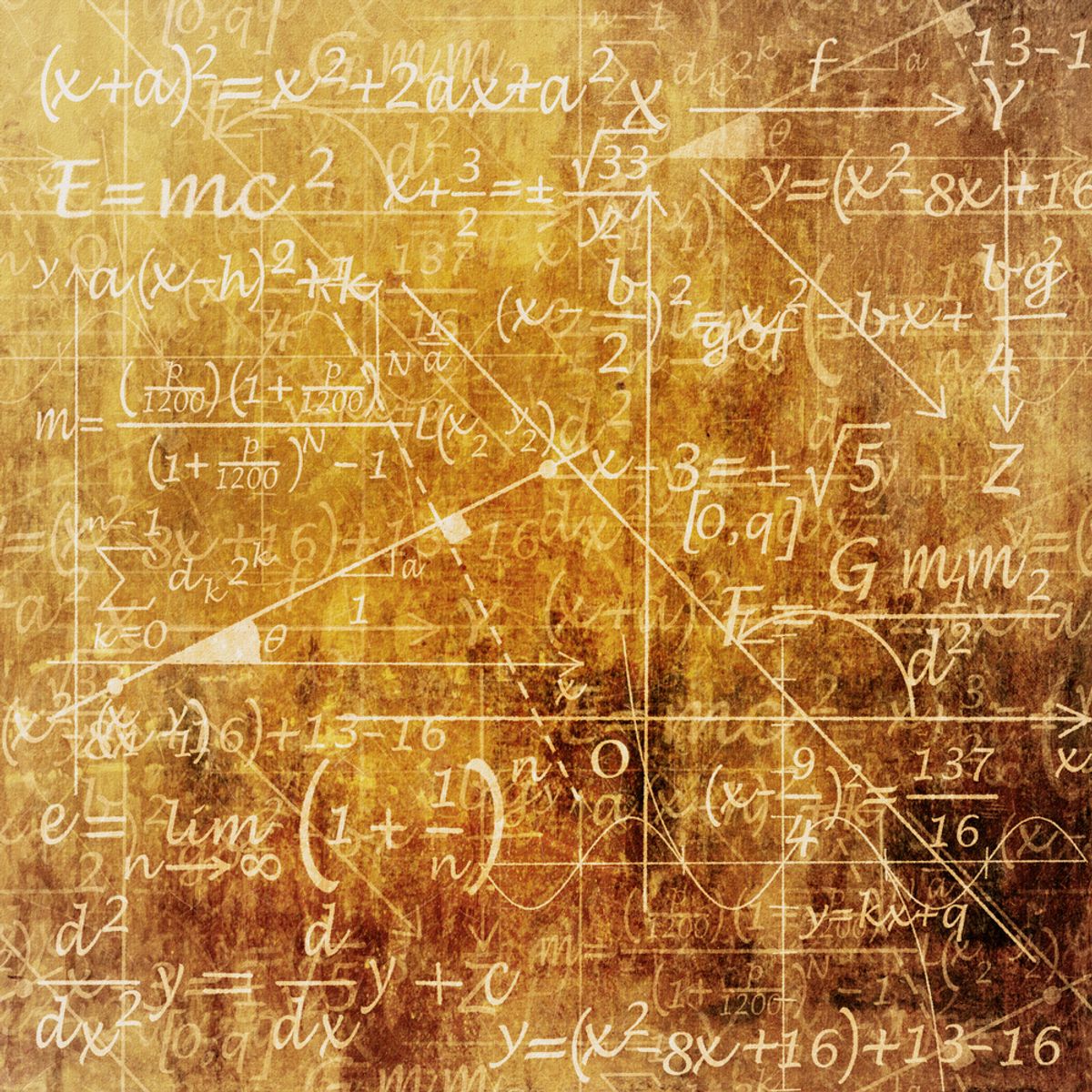 The Italian mathematician and astronomer Galileo Galilei is often credited with discerning the vital role played by mathematics in our attempt to understand the universe. In a 1623 essay titled "Il Saggiatore" ("The Assayer"), Galileo compares nature to a book that is laid open for us to read — but cautions that the book "cannot be understood unless one first learns to comprehend the language and read the letters in which it is composed. It is written in the language of mathematics, and its characters are triangles, circles, and other geometric figures without which it is humanly impossible to understand a single word of it; without these, one wanders about in a dark labyrinth."

Galileo was thinking primarily of astronomy and physics, but Kit Yates, a mathematical biologist at the University of Bath in the United Kingdom sees no reason to stop with the physical sciences; in his new book, "The Math of Life and Death: 7 Mathematical Principles That Shape Our Lives," he argues that math is, in a nutshell, everywhere. And, as his title suggests, math matters: We need it to understand how nuclear explosions work and how infectious diseases spread (and how they can be stopped); we need it to make sense of medical studies and crime statistics, and to evaluate the arguments that lawyers present in the courtroom; we need it to send rockets into space — and to understand why NASA's Mars Climate Orbiter crashed to the planet's surface (spoiler: NASA was using metric figures while one of its contractors was using imperial units).

Though this is a fun and non-technical book (there are no equations), some of the topics are deadly serious. Take American crime statistics. Yates cites the work of a British journalist named Rod Liddle. In a provocative blog post published at the height of the Black Lives Matter movement, Liddle declared that the greatest danger to black people in the U.S. is "other black people." He wrote, "Black-on-black murders average more than 4,000 each year. The number of black men killed by U.S. cops — rightly or wrongly — is little more than 100 each year. Go on, do the math."

And so, Yates did. First of all, Liddle's figures are off: The number he cites for so-called "black-on-black" crime is exaggerated; at the same time, his figure for blacks killed by police is about one-third of the true value. But as Yates points out, there is also a deeper problem. The total number of people killed by police is low in terms of overall gun deaths — but it is still "alarming," as he puts it, that so many victims of police shootings are black.

Further number crunching ensues. Yates shows that the rate at which police kill black Americans works out to just below one killing per 2,000 police officers — a figure "over eight times higher than the rate for black U.S. citizens." He adds: "It seems that a black person walking down the street should be more alarmed to see a police officer approaching than another black person." A better understanding of some basic mathematics brings a little clarity to an often-fraught issue.

Another serious topic Yates tackles is epidemiology, including, for example, the Ebola crisis that ravaged West Africa beginning in 2013. Nations outside of Africa were understandably concerned about the disease reaching their shores, but how real was the danger? The British government began screening arrivals from high-risk countries at the nation's largest airports, and at the Eurostar train terminal in London, but a team of U.K. mathematicians showed that this was an ineffective approach.

The incubation period of the disease (the interval between exposure to an infectious agent and the appearance of the first symptoms) was determined to be about 12 days on average. Because this is a relatively long time compared to the travel time needed for someone to fly from one continent to another, even if someone infected with Ebola arrived in London, they'd likely be asymptomatic (only 7 percent of those infected would be detected at the border, the mathematicians showed).

Better to tackle the problem at its source, investing resources in West Africa in the hope of containing the outbreak. This, Yates writes, "is an example of mathematical intervention at its best ... a simple mathematical representation of the situation can give us powerful insights and help to direct policy."

That chapter — which also deals with the SARS outbreak that hit Canada in 2003 — serves as a useful primer for anyone who (like myself) knows nothing of epidemiology beyond what they happen to come across in the media (or in Hollywood thrillers such as "Contagion").

Which infectious diseases should we fear the most? As Yates explains, those with the highest mortality rates do not necessarily kill the most people. The science behind this is straightforward: If a disease is too deadly, it kills its victims before they can pass on the disease. What we should fear, then, are illnesses that feature some combination of deadliness and contagiousness. He points out that measles is highly infectious — each person with the disease typically infects 12 to 18 others — but has a relatively low mortality rate. Ebola, in contrast, is much less contagious — each patient infects just 1.5 others, on average — but it is much deadlier, killing more than half of those infected.

Amid the harrowing descriptions of these diseases, however, is a modicum of good news: "Diseases that kill most of the people they infect and also spread efficiently are very rare and are usually confined to disaster movies."

There are more uplifting excursions as well. Suppose you're hungry, but you're in an unfamiliar city. You arrive at a street with many restaurants. You can peruse their menus one by one, but how far along the street should you go? (I know I've been in this situation countless times and I confess I never thought of it in mathematical terms.) Suppose there are 10 restaurants. It's unlikely that the first one will just happen to be the best, so you keep going. But there's no need to go all the way; after all, it's equally unlikely that the final one will happen to be the best.

It turns out that your most efficient strategy is to examine the first 37 percent of the restaurants (if there are 10, examine three of them) and then choose the best one from among those. Why 37 percent? The number is actually 1/e, where e is "Euler's number," an irrational number that's roughly 2.718. (True math buffs may be disappointed that Yates presents this result, but does not derive it: to do so he would presumably have to violate his no-equations policy.)

The beauty of this solution is that it applies far beyond restaurants: When looking for the shortest line at the grocery store, you should similarly examine a bit more than one-third of the lines; when hunting for the quietest carriage on a train, you should scope out one-third of the carriages; and a manager in charge of hiring ought to consider at least the first 37 percent of applicants. (Of course, the manager can choose to be thorough and consider all the applicants, but, as Yates explains, the odds of someone in the final 63 percent being significantly better than the best candidate among the initial 37 percent is very low. It's a case of diminishing returns.) At any rate, every time I line up at the grocery I will now think about the 18th-century Swiss mathematician Leonhard Euler.

Yates is very much reaching out to those who struggled with math in school; he even insists that "this is not a math book." His conversational style helps as well. But I noticed that some of the ground he covers is well-trodden. Readers of Jeffrey Rosenthal's 2010 book "Struck by Lightning" may find some of Yates's themes (especially his discussions of probability and statistics) to have a familiar ring. Some readers will find a foray into the history of clocks and timekeeping similarly familiar. Still, there is much here to reward the mathematically curious reader; and I think Galileo would be pleased to see that we continue to benefit from looking at the world through a mathematical lens.

Dan Falk (@danfalk) is a science journalist based in Toronto. His books include "The Science of Shakespeare" and "In Search of Time."