One-term presidents: Will Donald Trump end up on this ignominious list?

Donald Trump could become the 11th one-term president in American history. The list starts out well, but then ... 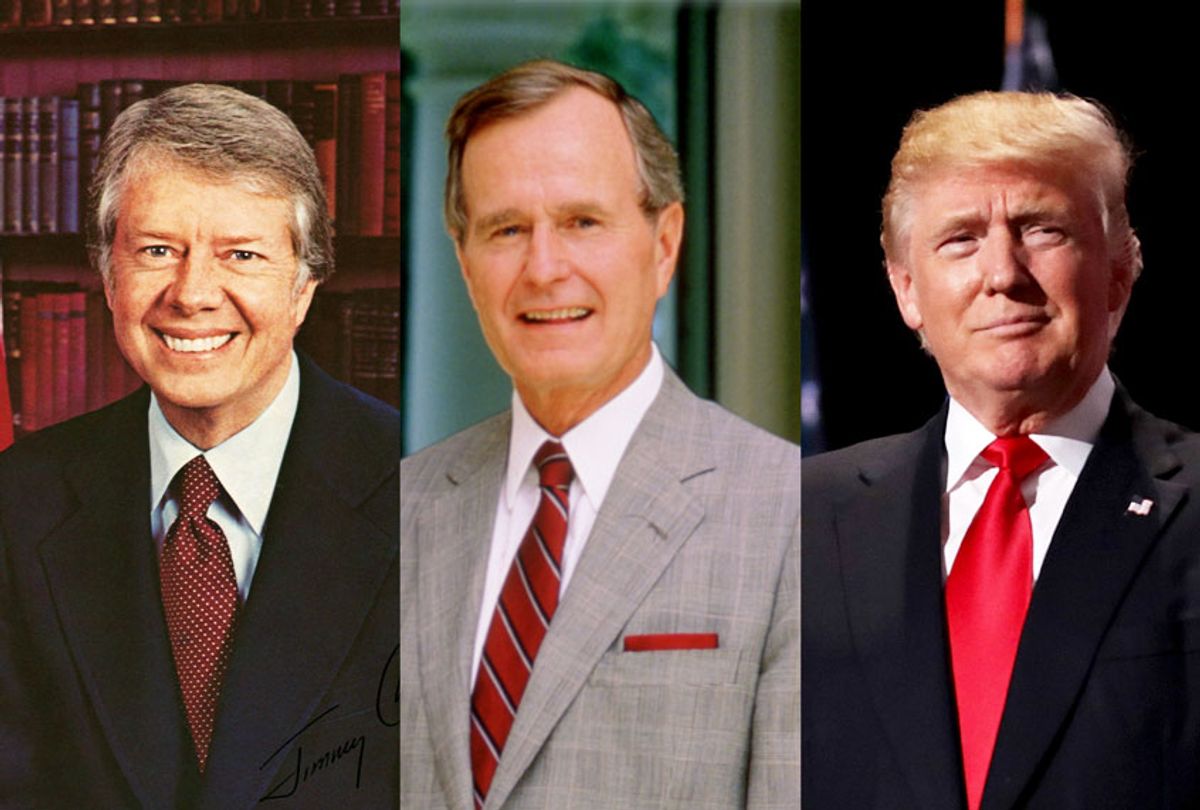 Donald Trump has many hardcore fans and many, many detractors. It's certainly possible he will be re-elected, but also clearly plausible that he will be a one-term president. General election polls have generally found him trailing in a head-to-head matchup with either former Vice President Joe Biden or Sen. Bernie Sanders, and roughly even with Mayor Pete Buttigieg, Mayor Michael Bloomberg and Sen. Elizabeth Warren. It would be folly to say that he is definitely going to lose, to be sure, but it is equally foolish to act as if he has victory in the bag.

One thing is for sure: Trump, a man obsessed with winning, desperately wants to avoid going on the list of American presidents who failed to win a second term. But if that happens to him, who else is on the list?

Before proceeding, a quick clarification on terminology. For simplicity's sake, I'm restricting the list to incumbent presidents who ran for election as their party's nominee but lost the general election. This excludes presidents who chose not to run for re-election (this happened as recently as Lyndon Johnson in 1968), as well as those who failed to win their party's nomination (since we can't extrapolate from that how they would have done in a general election).

I'm including Gerald Ford in 1976, who ran as an incumbent and lost, even though he hadn't been elected in the first place (he was an appointed vice president who became president after Richard Nixon's resignation). But this rule excludes former presidents who tried to run again after they were out of office: Martin Van Buren, Millard Fillmore and Theodore Roosevelt all did. Van Buren appears on this list, but only because he lost as an incumbent before running again (and losing again).

I can't tell you whether Trump will wind up on this list. But here are the presidents whose legacy he hopes he won't have to share.

The election of 1800 is best remembered for the Electoral College controversy that occurred after the technicalities of the early Constitution caused the two Democratic-Republican candidates to fight for election in the House of Representatives. That constitutional flaw was later fixed by the 12th Amendment, which requires each elector to cast one vote for president and one vote for vice president. This was the first time  a sitting president was forced to relinquish power unwillingly. Adams' predecessor had been America's first president, George Washington, who genuinely did not want to remain in office after his second term expired in 1797.

Adams, by contrast, fought hard to stay in office, even though he had become very unpopular due to his perceived sympathy for Great Britain in the French Revolutionary Wars and for passing the Alien and Sedition Acts, the most controversial provision of which made it illegal to criticize the government if the statement was deemed false. After losing to Vice President Thomas Jefferson, his longtime friend and the Democratic-Republican candidate, Adams was bitter — but nevertheless accepted the results and stepped down. It was an important moment in the story of American democracy. As such, Adams can be safely regarded as America's noblest and most important one-term president… and an example for Trump to follow, given concerns that he may try to stay in power if he loses in 2020.

The second one-term president was also the other president from the Adams dynasty. In 1824, the younger Adams had been elected to the presidency after no candidate won a majority in the Electoral College, throwing the election into the House of Representatives as a result. Because Adams had not won the most popular votes and (according to his critics) had struck a deal with Speaker of the House Henry Clay to get the presidency, his administration began under the taint of impropriety, deserved or otherwise. It did not help that Adams passed the so-called Tariff of Abominations in 1828, which helped the economy in Adams' native New England at the expense of states in the South and West.

The parallels for Trump here are obvious: Like Adams, he took office under a cloud of perceived illegitimacy due to the widespread belief that he had colluded with Russia and the fact that he had lost the popular vote. If Trump's trade wars damage the American economy, he could also find himself sharing something with Adams in that respect as well. Adams was ultimately defeated in 1828 by the popular vote winner from 1824, Gen. Andrew Jackson.

Two factors relegated Van Buren to the status of a one-term president. The Panic of 1837 had caused a major economic depression that did not lift until the mid-1840s. Van Buren spent most of his administration trying unsuccessfully to lift the economy, while an angry public began to perceive him as a would-be aristocrat whose urbane tastes made him out of touch with the American people. This description was genuinely inaccurate, but that didn't much matter when the opposition Whigs nominated Gen. William Henry Harrison, who was characterized as "the log cabin and hard cider candidate." It is likely that any Whig would have defeated the unpopular Van Buren in 1840, but Harrison had a war record, was perceived as a populist and put together a highly efficient campaign organization.

Is Cleveland a one-term president or not? He actually won the popular vote when he ran for re-election in 1888, but lost in the Electoral College to former Sen. Benjamin Harrison of Indiana, who won several large states by small margins. (This may sound familiar.) Nevertheless, Cleveland does deserve some of the blame. Despite being popular in his first term for his hardline stance against corruption and wasteful spending, Cleveland focused his re-election campaign on lowering tariffs, an issue that split both major parties down the middle and (from a strategic standpoint) created unnecessary controversy around his candidacy. Cleveland was able to redeem himself, however, by being elected to another term in 1892, and remains the only president to serve two non-consecutive terms.

By the time Harrison had to face Cleveland in a rematch, the incumbent president's electoral doom was pretty widely accepted. His Congress became known as the Billion Dollar Congress because of its unprecedented levels of spending, farmers in the South and West were in revolt against deteriorating economic conditions that hit them especially hard, and Harrison's notoriously icy personality had made him extremely unpopular. Cleveland was helped by the fact that a growing faction of economic radicals known as the populists were trying to gain control of the Democratic Party; he was seen as an economic conservative, which made him a safe alternative for the powers that controlled the party organization.. Republicans were lackluster in their support for Harrison, and Cleveland won easily.

If ever a president could claim to have been robbed of a second term by a third-party spoiler, that man was Taft. While his Democratic opponent in the 1912 election, Gov. Woodrow Wilson of New Jersey, received less than 42 percent of the popular vote, Taft earned a meager 23 percent — only good enough for third place, because Republicans were split down the middle by the third-party candidacy of former President Theodore Roosevelt, who won more than 27 percent of the popular vote. It is impossible to know whether all or even most of Roosevelt's voters would have gone to Taft had he not been in the race; Wilson was perceived as more progressive than Taft, and because Roosevelt ran as a progressive Republicans, it is conceivable or even likely that many of the Roosevelt voters would have preferred Wilson. Nevertheless, the fact remains that Taft's historic defeat was primarily a function of his divided party.That's one problem Donald Trump clearly won't face.

Hoover lost the election of 1932 for one reason: The Great Depression. Although the causes of that historic economic implosion preceded Hoover, and historians agree that he did more to try to fight it than was appreciated at the time, he was widely blamed for the worst economic implosion in American history. Any Democrat who ran against him that year was bound to win as long as he stayed alive until Election Day. While past presidents had won re-election even in poor economic conditions, Hoover was the case study in a political truism, which holds that a truly bad economy is politically fatal to a sitting president. Of course,the main who replaced Hoover, Franklin D. Roosevelt, wound up being one of the most influential presidents in American history.

Ford is undeniably a special case, as the only president never elected to high office on a national basis. He was a Michigan congressman when appointed to replace Spiro Agnew as vice president, and then took over in the Oval Office when Nixon resigned. He ran for election on his own in 1976 during a flailing economy, but lost to Jimmy Carter in one of the closest elections in American history. Ford's big mistake was to pardon Richard Nixon for the Watergate scandal just a month after taking office. His approval ratings plummeted, never again to reach their previous heights. Ford struggled to win the Republican nomination, only narrowly beating Ronald Reagan, who would make history with his own election victory four years later.

Like Hoover in 1932, Carter's re-election campaign in 1980 was doomed in large part because the failing economy made him politically toxic. To make matters worse, a failed attempt to rescue the U.S. hostages taken at the embassy in Iran made Carter appear weak on foreign policy. Finally, Republicans were galvanized by Reagan's conservative ideology and personal charisma, while Carter had to fend off a primary challenge from Ted Kennedy of Massachusetts and then the third-party candidacy of John Anderson, a moderate Republican congressman a liberal Republican congressman, John Anderson of Illinois. Carter ran a feeble campaign and then conceded on election night while the polls were still open in California, with Reagan winning in a historic landslide. Of all the one-term presidents, Carter is the one who actually accomplished the most substantive good during his presidency.

As the most recent one-termer, the elder Bush offers a cautionary tale for Trump supporters. Halfway through Bush's first time, he president had an approval rating of 89 percent thanks to his foreign policy successes, notably the end of the Cold War and the 1991 Gulf War that drove Iraqi forces out of Kuwait. Yet an economic downturn quickly turned the public against Bush, and Bill Clinton, the somewhat unlikely Democratic nominee, defeated him easily. The moral of the story, perhaps, is something most one-termers have learned the hard way: Nothing in politics is ever certain, and if you think you have things figured out, you're probably wrong.