King is often honored as a "civil rights" leader, while his Bernie-style radical economic vision is overlooked 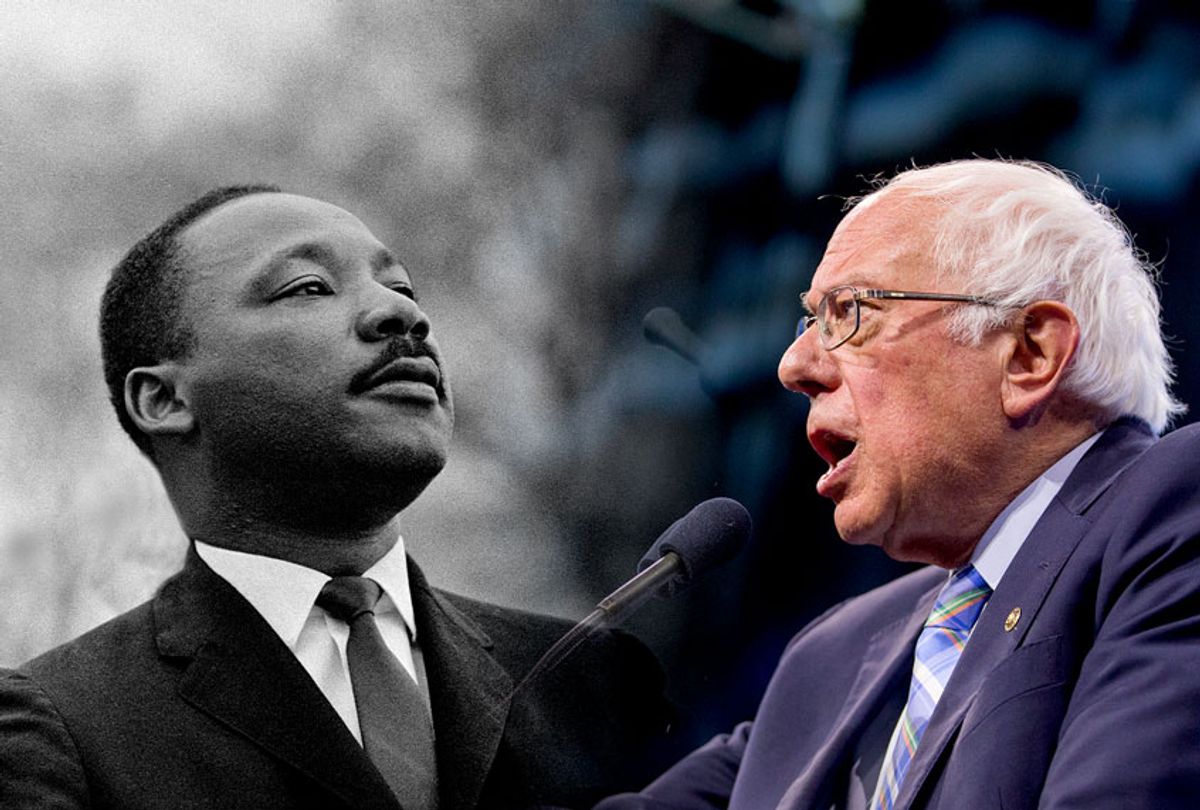 While it's widely known that Sanders joined King during the famous March on Washington in 1963, it's not observed often enough that King's ideas on economic justice likely influenced Sanders. Many people who celebrate King's legacy see him as a fighter solely for "civil rights," in a narrow, legalistic sense, and do not acknowledge his commitment to economic justice. This is more than historical ignorance. On a deeper level, it's about cherry picking which aspects of King's legacy to honor.

We still live in a world with racism, and should remember that King wanted a society where we are judged by the content of our character, not the color of our skin. Yet we also live in a country where income inequality is rampant, where President Trump's economy is hailed as a success for producing jobs, even though millions of them are low-wage, low-skill positions, and where Republicans consistently blame the poor for their own poverty. At such a time, it is downright immoral to overlook that King believed that economic justice and racial justice were inextricably linked. He would likely be just as appalled by the rampant poverty of our time as he would be by the fact that we elected a president whose campaign focused on delegitimizing the first black president and demonizing immigrants of color.

1. King fought for economic justice throughout the 1960s

Early in his life King described himself as a "profound advocate of the social gospel," arguing that American capitalism was intrinsically flawed because it subordinated human rights to the earning of profit and property. In 1963 — the same year as his famous "I Have a Dream" speech — he told the AFL-CIO that "economic justice" means that America must be "a land where men will not take necessities to give luxuries to the few" and "where all our gifts and resources are held not for ourselves alone but as instruments of service for the rest of humanity." By 1966, King wrote the introduction to a booklet called "A Freedom Budget for All Americans," which argued that racial justice and economic justice needed to be achieved together and called for a revival of Franklin D. Roosevelt's New Deal. One year later, King explicitly said that "the problem of racism, the problem of economic exploitation, and the problem of war are all tied together. These are the triple evils that are interrelated."

2. King articulated a detailed program for economic justice in the year he was assassinated

None of these things, though, compare to a document that King composed in 1968, less than two months before his death. After writing that African Americans were "locked up in an economic underworld of poverty, joblessness, and unemployment," King advocated for all of America's poor people to unite in a common cause, one that should not be characterized as "charity" but "justice." Characterizing it as "an economic and social Bill of Rights," King called for every American capable of working to receive a guaranteed job, for poverty to be eliminated through the provision of a universal basic income, for slums and racialized neighborhoods to become a thing of the past, for every child to have access to a quality education, for the people impacted by social legislation to have a " statutory right to play a significant role in how it shall be designed and administered" and for every American to benefit from "modern science in health care."

King summed it up succinctly in an essay published after he died: "We need an economic bill of rights. This would guarantee a job to all people who want to work and are able to work. It would also guarantee an income for all who are not able to work. Some people are too young, some are too old, some are physically disabled, and yet in order to live, they need income."

He added, "We feel that much more building of housing for low-income people should be done. On the educational front, the ghetto schools are in bad shape in terms of quality. Often, they are so far behind that they need more and special attention, the best quality education that can be given."

When King was assassinated in Memphis in 1968, he was striving to make that dream into a reality. His purpose was to launch the Poor People's Campaign, beginning with an effort to help sanitation workers strike for an improvement in their wages and working conditions. The words he used to describe why he was down there could easily be used today about the struggle of any group of economically disempowered people anywhere. This speech was delivered the day before King was assassinated.

[L]et us keep the issues where they are. The issue is injustice. The issue is the refusal of Memphis to be fair and honest in its dealings with its public servants, who happen to be sanitation workers. Now, we've got to keep attention on that. That's always the problem with a little violence. You know what happened the other day, and the press dealt only with the window-breaking. I read the articles. They very seldom got around to mentioning the fact that one thousand, three hundred sanitation workers were on strike, and that Memphis is not being fair to them, and that Mayor Loeb is in dire need of a doctor. They didn't get around to that.

Now we're going to march again, and we've got to march again, in order to put the issue where it is supposed to be. And force everybody to see that there are thirteen hundred of God's children here suffering, sometimes going hungry, going through dark and dreary nights wondering how this thing is going to come out. That's the issue. And we've got to say to the nation: we know it's coming out. For when people get caught up with that which is right and they are willing to sacrifice for it, there is no stopping point short of victory.

I'm not saying that Bernie Sanders or his campaign have some unique claim to King's ideals. But I'm saying that if you don't want government programs that guarantee jobs, livable income, decent health care and quality education to all citizens, you have no right to claim any allegiance to Dr. King. You are simply mouthing the platitudes that are inoffensive to contemporary ears while avoiding speaking inconvenient truths. You're OK with shaming the racists — as well you should be — but not OK when King's ideals shame you for your own support of economic oppression.

5. If we lived in the America that King envisioned, Bernie Sanders wouldn't even be seen as radical.

In the future society that King hoped for, Sanders might not be a particularly interesting candidate. The premise that no one should be poor, that all people have a right to affordable health care, that everyone is entitled to dignity and respect at work, would all be taken for granted. Sanders might come off as a man preaching that fire is hot and water is wet.

We don't live in that world. There are many reasons for that, but it doesn't help that we neglect King's full legacy, pretending to honor the man as an American hero and a martyr for justice without understanding the true content of his message. Bernie Sanders is certainly not the perfect vessel for that message, but he understands the full force of King's legacy more than any other 2020 presidential candidate.