Meet the goon squad: Donald Trump's defense team is amazing — but not in a good way

Christian fanatics, TV showboats and corrupt clowns: Trump and his lawyers clearly deserve each other 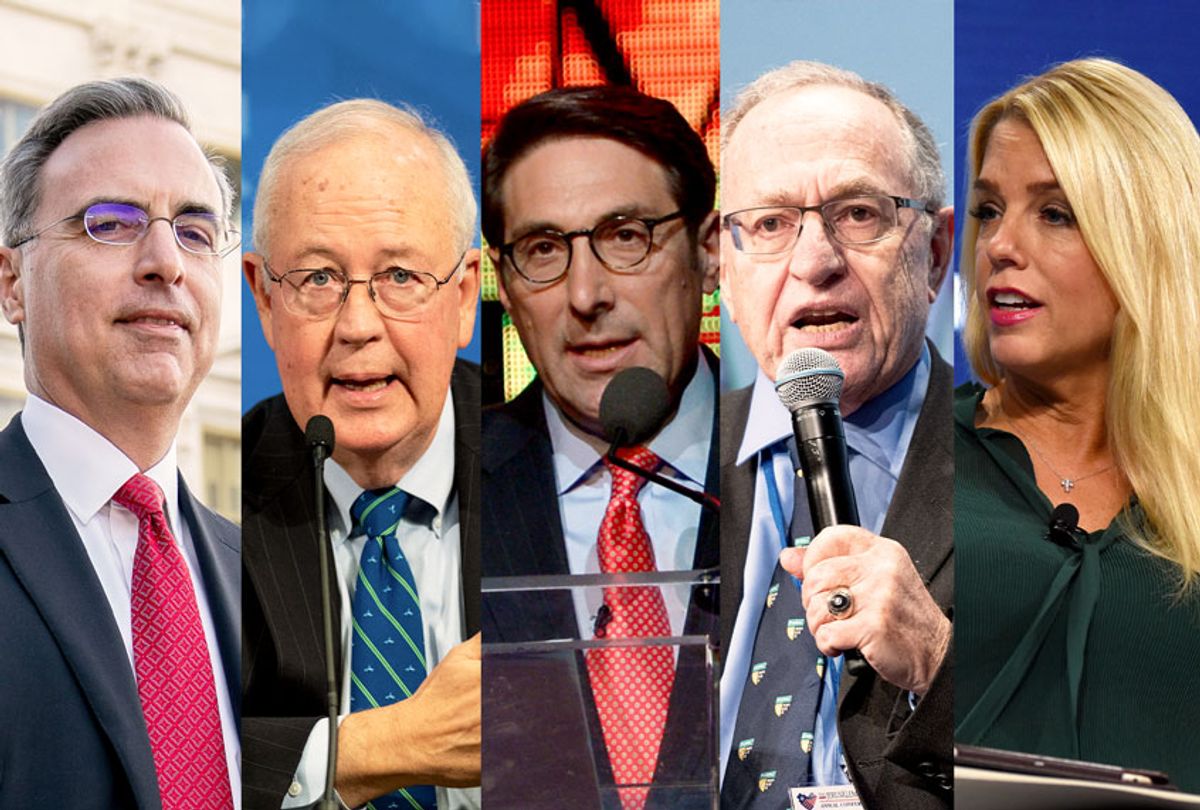 The impeachment trial of Donald J. Trump begins on Tuesday morning. If you've been closely following the Trump saga since he came down his golden escalator and declared his candidacy, as I have, you are not terribly surprised that it has come to this. Unfortunately, most of us who could see how he might seduce the faction of the country that had been primed for a demagogue like him over the past several decades also overestimated the patriotism of Republican officials, many of whom made it clear in the beginning that they knew what he was and have since rolled over for him like trained poodles. That phenomenon is what will determine the eventual outcome of the trial we are about to witness.

We have an incompetent and corrupt president, who has clearly committed multiple cases of abuse of power, being protected by his party — which is openly engaged in a cover-up of his high crimes. Leading Republicans are no longer even trying to pretend they are statesmen (or women). It is just an exercise of pure partisan resistance to any and all accountability for their leader.

The best illustration of that is the way Majority Leader Mitch McConnell has manipulated the trial procedures to be as opaque and hurried as possible. His rules for the media, and his demands that much of the trial be presented in the dead of night, are nothing more than an attempt to cover up the proceedings as much as possible.

Trump's attorneys' legal arguments show how contemptuous the president is of the process. Harvard Law professor Laurence Tribe has called them "garbage dressed up as legal argument." Nonetheless, Trump's team seems highly confident that this is all they need to do, knowing that their GOP allies will do as they're told and Republican voters will be shielded from the truth by Fox News and other right-wing media.

So what kind of lawyers would take a case like this? It appears that it isn't top conservative legal talent. According to George Conway, the Trump critic and high-powered conservative lawyer (and husband to White House aide Kellyanne Conway), the top law firms won't go near Trump. He has a bad reputation for not paying his legal bills and refusing to follow his attorney's advice, making the lawyer (and him) look like fools. They also worry that the top law school talent will go elsewhere rather than be associated with this administration.

Trump has already gone through a slew of attorneys in his three years in office. His original White House counsel, Don McGahn, left long ago, as did Trump's personal lawyers John Dowd and Ty Cobb, who handled the Mueller investigation. Also gone is Emmet Flood, who was on Bill Clinton's impeachment team and would have likely been an asset in this proceeding.

So he's left with his latest White House counsel, Pat Cipollone, a former corporate lawyer and Catholic activist. (Fox News host Laura Ingraham has called him her "spiritual mentor.") Cipollone was highly recommended by his good friend Bill Barr and Trump's other lawyers, Jay Sekulow and Rudy Giuliani. From what other lawyers say about Cipollone's legal arguments during the impeachment process so far, particularly the incomprehensible screed he sent to the House before the hearings (which was quite likely dictated by Trump), he is no longer concerned with his reputation as a serious jurist.

The second in command on the Trump team is Sekulow, previously known as a legal advocate for the Christian right. Like so many of his brethren in that movement, he apparently sees no barrier to empowering and defending a corrupt, libertine president. But then, Sekulow has more in common with Trump than he admits. He's also personally implicated in the Ukraine scandal, which is not unusual for a Trump attorney. Since these guys are throwing out the common understanding of the Constitution, they might as well discard any notions of conflict of interest as well.

There are a couple of other deputy White House counsels added to the list, Patrick Philbin and Mike Purpura. Both of them are former Department of Justice attorneys who've been handling much of the stonewalling detail work. Jane Raskin, who was hired along with her husband last year to help Trump with the Mueller investigation, is also on board but not expected to be out front.

And then there are the Fox News "stars," meaning Ken Starr, Alan Dershowitz, Robert Ray and Pam Bondi, who were obviously brought on because Trump wanted to hire the lawyers from "Law and Order" but was gently informed that they were fictional characters. (OK, I made that part up — but it's sad that such a thing is so believable.) He settled for Fox News talking heads who can speak credibly to the only people who matter — his base.

I don't think I have to explain who Starr is, other than to point out that aside from his role in the inane Monica Lewinsky scandal, he was fired from his most recent job for covering up a sex scandal at Baylor University. He is yet another alleged puritan strangely drawn to Donald Trump.

Dershowitz is also famous enough that I don't need to run down his credits. He's been all over TV the last few days, claiming that he isn't defending the president but rather the Constitution and making all kinds of contradictory arguments in which he insists the president can't be impeached for abuse of power or obstruction of Congress. His view is decidedly a fringe interpretation.

Robert Ray, another independent counsel from the Clinton years, is on the team as well. That's a good thing, since he's been presenting himself on TV as some kind of neutral observer when it's clear that he's a Trump partisan through and through. And finally there is Pam Bondi, the former attorney general of Florida and one of Trump's favorites, presumably because she was so willing to please when he offered her a donation at the time she was considering whether to join the lawsuit against Trump University. She's Trump's kind of lawyer.

So what of Rudy Giuliani, supposedly Trump's personal attorney and trusted legal adviser? The last we heard from him, Giuliani was begging to defend Trump against impeachment by "prosecut[ing] it as a racketeering case," which he claims to have "kind of invented." Apparently, the president was persuaded that Giuliani might not be all that helpful to his case, since he's heavily implicated in the scheme himself and now under investigation in the Southern District of New York. Also, he is quite unhinged.

So here we go America. The third presidential impeachment trial in history is about to begin, and the president is being defended by religious right activists, corrupt politicians, crackpots and camera hogs. It should be quite a pageant. Go ahead and pop some popcorn, but I suspect you'll be needing an adult beverage to go with it before the day is over.