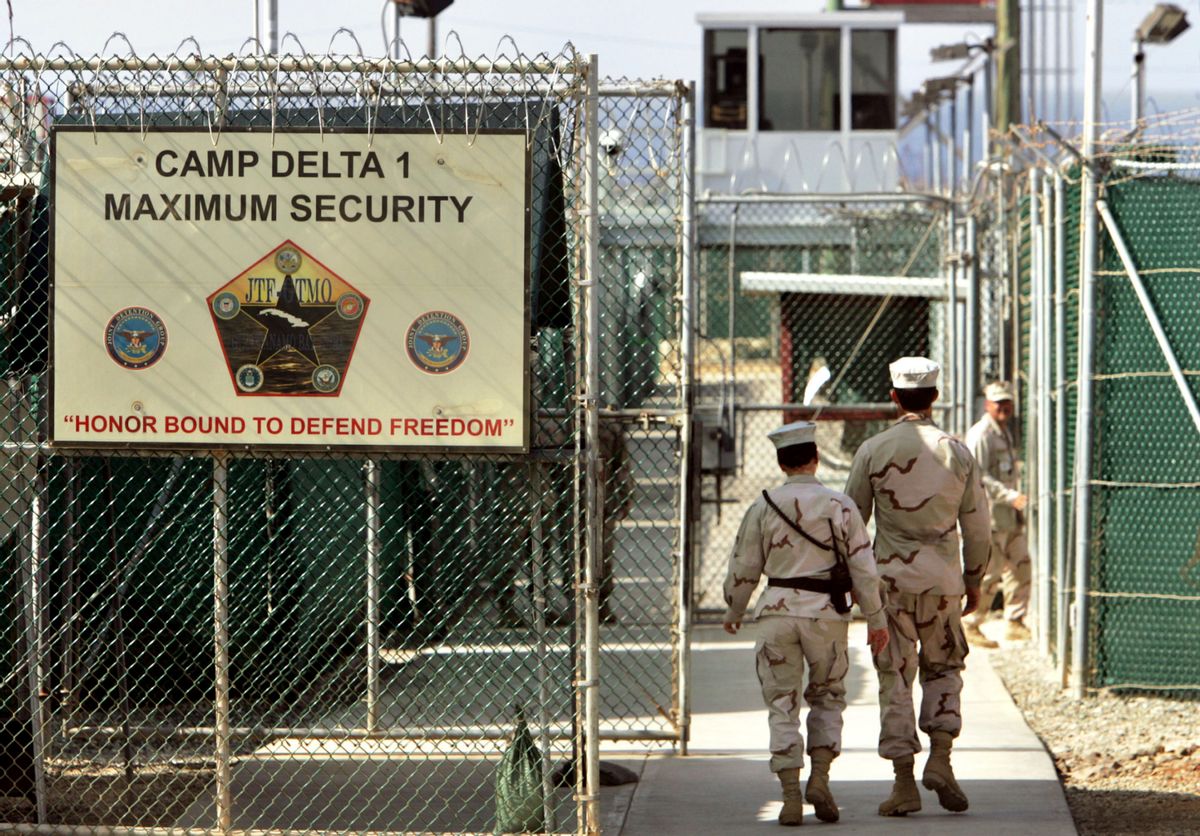 Human rights groups marked a significant "moment of reckoning" on Tuesday for the U.S. torture program used by the CIA following the attacks of Sept, 11, 2001, as the two psychologists who developed the program arrived at the Guantánamo Bay Naval Base in Cuba to testify under oath.

James E. Mitchell and John "Bruce" Jessen are testifying for the first time since 2017 as part of pre-trial proceedings in the trial of five men accused of plotting the 9/11 attacks. A military commission judge is currently considering whether statements made by the defendants can be considered voluntary and may be used in the trial, considering they were made after the men had been tortured using Mitchell and Jessen's tactics.

"The perverse 'work' of these psychologists has dramatically set back the global fight against torture," said Julia Hall, a counterterrorism expert with Amnesty International who is attending this week's hearings. "The interrogation methods they championed have had a rippling effect around the world."

Jessen and Mitchell will be questioned by the Guantánamo military commission about their role in the program, which they both designed and implemented while contracting with the CIA.

The torture methods used under the program included waterboarding, assault, stuffing prisoners inside coffin-like boxes, exposing them to extreme temperatures, starving them, chaining them in stress positions designed to induce pain and keeping them awake for days on end.

On Monday, ahead of the hearing, a former taxi driver and Guantánamo prisoner named Ahmed Rabbani, who has been held for 17 years without charge, published an op-ed in Newsweek.

"A 'sorry' would be nice," wrote Rabbani of the CIA torture he endured. In the op-ed, he explained:

The two "doctors" assured the military men who hired them and the lawyers and politicians who signed it off that their techniques were entirely "painless". Let me take you through the one described as "a technique in which the detainees' wrists were tied together above their heads and they were unable to lean against a wall or lie down." I was put down a hole, suspended by my wrists from two chains that were locked to a horizontal metal bar at a height where my feet could barely touch the ground. I was left in total darkness for days — perhaps a week. Without food. Standing on tiptoe in my own excrement.

"I doubt many innocent people were saved by torturing me," added Rabbani, who was kidnapped from Karachi, Pakistan, and sold to the U.S. by Pakistani officials. At the time, the U.S. accused him of being an accused terrorist named Hassan Ghul. Even after the U.S. determined that they had captured the wrong person, Rabbani was tortured at a CIA black site in Kabul.

Jessen and Mitchell last testified about the program when they gave depositions to the ACLU in 2017 as part of the group's lawsuit on behalf of survivors and victims of the two psychologists' torture methods.

"This testimony marks a critical moment for reckoning with the torture committed in the American people's name," said ACLU attorney Dror Ladin, who questioned Jessen in 2017. "Mitchell and Jessen, along with collaborators in the U.S. government, are responsible for shameful cruelty that the CIA is still trying to cover up. It is essential that the full story of the government's torture program be brought out, both in the military commissions and as part of a larger process of public accountability."

The American Psychological Association renounced Mitchell and Jessen in 2017, accusing them of "violating the ethics of their profession and leaving a stain on the discipline of psychology."

As the two psychologists arrived in at the military commission Tuesday, Physicians for Human Rights wrote that the pair had "perverted" their ethical obligation as health providers "to inflict severe pain on captives."

"The fact that they are testifying at this high-profile hearing shows the CIA's failure to root out the human rights abuses at the heart of its counter-terror program," said Hall of the two psychologists. "Torture is never justified and anyone who uses it must be held to account."