The actor/activist spoke to Salon about weed & his new film "Color Out of Space," based on an H.P. Lovecraft story 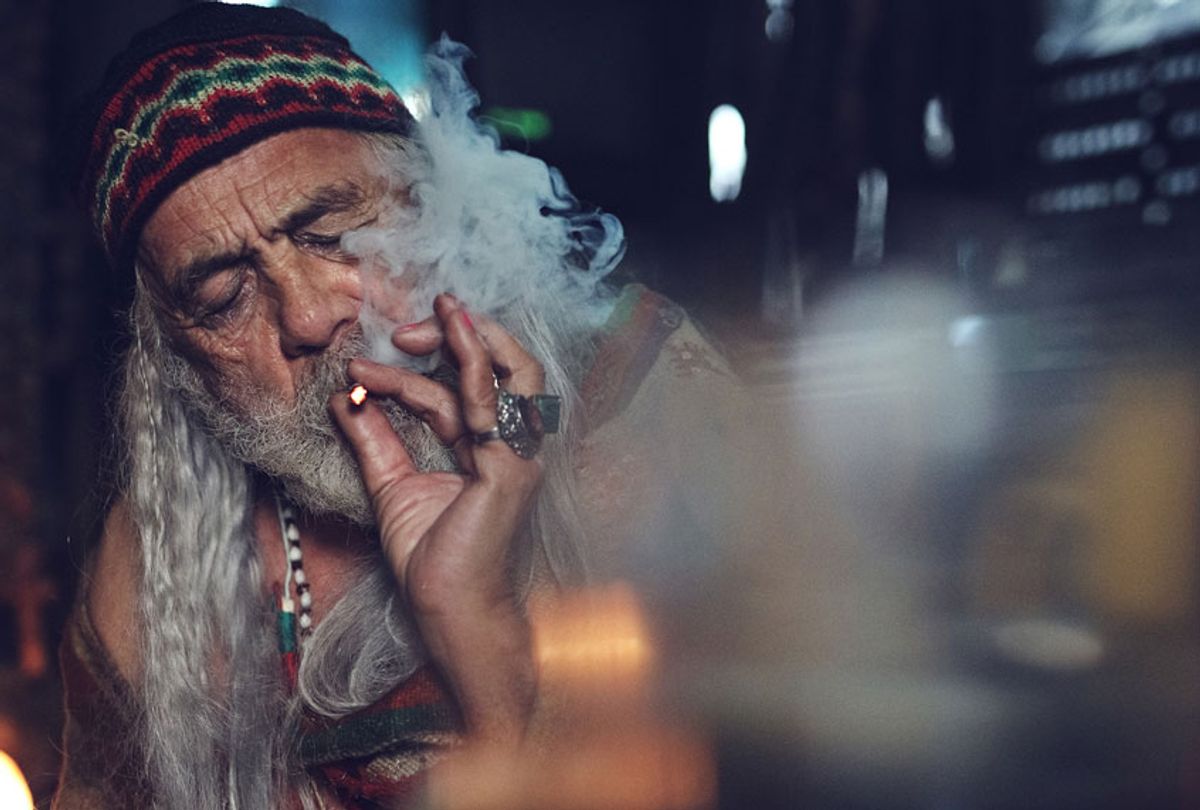 Tommy Chong plays arguably one of the two sanest characters in the trippy, psychotronic, sci-fi film, "Color Out of Space," based on the H. P. Lovecraft story. The comedian, actor, and marijuana activist plays Ezra, a "hippie reprobate" and squatter living off the grid — even his cameras are solar-powered — and on the land owned by alpaca farmer Nathan Gardner (Nicolas Cage). When a meteorite lands on the property, all hell breaks loose, with animals changing form or dying, strange voices being heard, plants growing, electronics going wonky, and water being contaminated (Nathan develops a strange rash after a shower). Ezra wonders, have aliens arrived? Perhaps.

Chong's few scenes as a philosopher-stoner show not just how the more laid back half of the famous duo Cheech and Chong has matured over the years, but he leans into his character: painting his face and fingernails and letting a mass of gray dreadlocks cascade over his face and back as he deals with the fallout of the meteorite.

In a recent phone interview, the performer waxed philosophical about his new film, his career as a whole, and his thoughts on jazz musicians, drugs, and drug laws.

Your acting roles often have you playing "hippie reprobate" characters like Ezra. I'm curious how much of your work is acting, versus just showing up and being Tommy Chong?

Mostly, if I have a choice, it's showing up and being Tommy Chong. I never had the ambition to be a great character actor. I was almost ready to just do my standup but the director, Richard Stanley, wanted me for this. He thought I'd be perfect for the part and he was right. It was fun. I felt like an old pro.

I like that Ezra is a philosopher-stoner. He speaks truth to power, even when power isn't listening. Surely, you have reached a level of enlightenment that some folks might ignore. Can you talk about your approach to your work?

The key to acting is always speaking from the heart and getting inside the character, and that's why I don't want to play in certain movies or types of characters that don't appeal to me. But I am the old codger who knows a lot and tries to tell people things whether they want to hear them or not.

The way they treat me as an actor, like in "Jay and Silent Bob, Reboot," there were no lines, just questions for me to answer. I'd answer a certain way, and they'd say, "Try it again." We did this same approach in "Color Out of Space," which is how you work with old guys who don't remember lines. But old guys should stumble and moan and groan and talk about other things while they try to collect their thoughts.

You have been an activist and advocate for changing marijuana laws. How do you think we have progressed as a nation regarding access and perception?

I realized very early on that it was a blatantly racist law. I credit Jack Herer, who wrote "The Emperor Wears No Clothes," for my enlightenment. We've become good friends over the years.

It was jazz musicians that turned me on when I started smoking. Jazz musicians are the most intelligent species on earth; they take music to a higher level. When I met these guys, they would be smoking weed as opposed to drinking alcohol, though some did heroin. It was the weed that caught my eye. I've been a body builder all my life, and Arnold Schwarzenegger wouldn't drink a Diet Coke, but he would smoke a joint. Then I realized it was good for you, with the sleep aids and opioids it's been able to replace.

I was left with this musical ability. Jazz is like math; it's the art of the exact, and you're dealing with truth when you deal with jazz. The musicians turned me on to not just the pot smoking, but the spiritual books as well, like "The Third Eye," by Lobsang Rampa. That's what gave me my enlightenment: my musical connections and that book. I used that philosophy in everything: my acting, my art, my life. And it's never failed me. As you get older especially with me, you get more philosophical . . .  [Chong pauses] Yeah, man.

Ezra lives off the grid. What are your thoughts about escaping from or engaging with the world as we know it today? The world is a pretty messed up place!

It's supposed to be, it always was. We live in a physical world. You know that prayer, "On earth as it is in heaven"? If you look at the physical world, it's scary. The heavens' bright lights are not there to soothe us. There are violent explosions going on right now, and galaxies colliding, and worlds being torn apart. This is going on in our physical world we live in. And we're here for a reason. We're here to learn. You can't learn in the spiritual world. You just are. There are no wants, needs, or desires in the spiritual world.

Our world today is scary, there is violence, and there are moments of peace. We have peace in parts of the world, but we never had total peace in all of the world. And we never will. All the natural disasters, we're part of it. We're learning how to cope and deal. We're only here to learn and help each other . . . Not everyone's the same. We're all totally unique. That's what I've learned over the years. Work on yourself. That's what we need to do.

Last night I spoke at USC, and I talked with kids who are coping with the fact that weed was legal. They couldn't understand what it was like when it wasn't legal. They have other problems We're all born with problems. We have to learn to solve them and do it the best way we can.

As you look back over your life and career, what observations do you have regarding your career as a whole? You achieved considerable success with the series of Cheech and Chong films. Did you ever expect them to be as widely appreciated as they were?

Over the years, I've managed to stay in character. The character I came up with was the stoner. And being stoned is not like being drunk. It's being so much in the moment. I'll take a hit or two and enjoy the high and being in the moment, and no matter what that high is, there's so much to see and learn and enjoy. When I was in prison, I learned to enjoy it because I had the time and ability and spiritual awareness to get by in this world. If you have spiritual awareness you can cope with anything or everything. The phrase that keeps me is, "This too shall pass." I love that phrase. It means the good, the bad, and the ugly. "This too shall pass." That's how I deal with Trump. Whenever he acts up, I think, "This too shall pass."

"Color out of Space" will be released in theaters on Friday, Jan. 24.