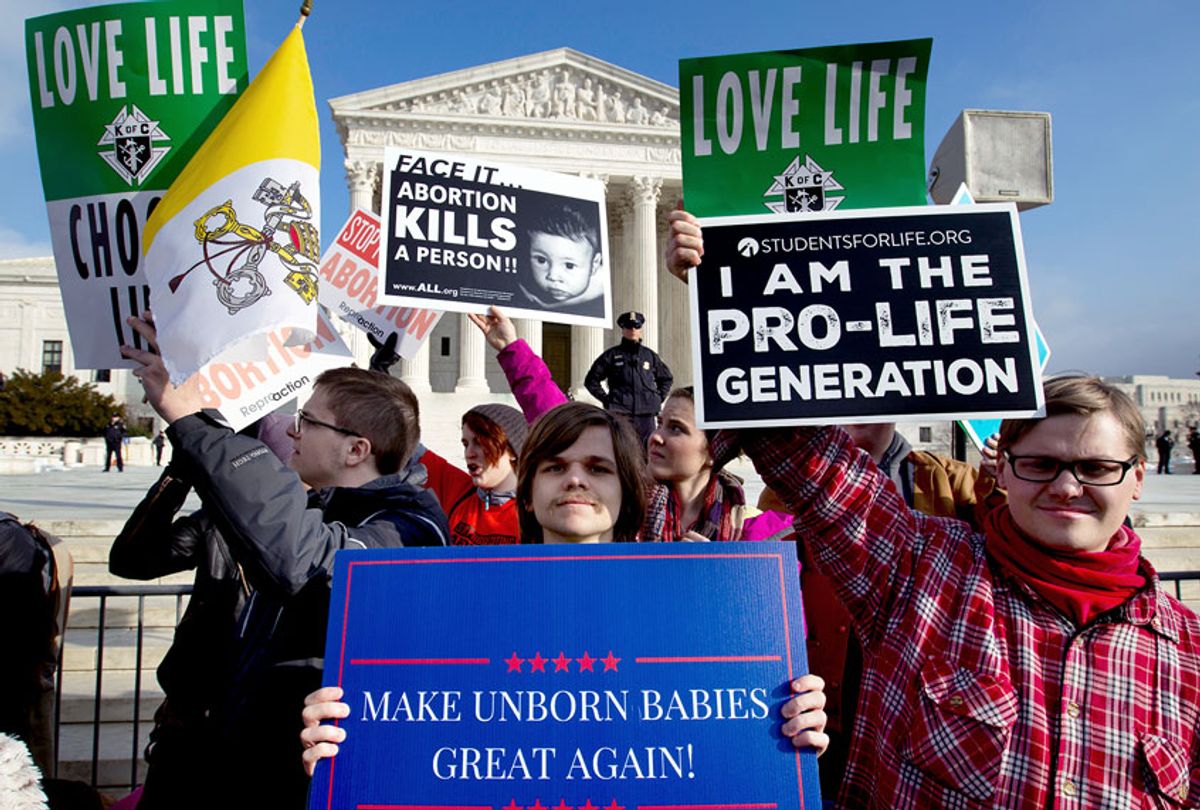 In this Friday, Jan. 18, 2019 file photo, anti-abortion activists protest outside of the U.S. Supreme Court, during the March for Life in Washington. President Trump's call for a ban on late-term abortions is unlikely to prevail in Congress, but Republican legislators in several states are pushing ahead with tough anti-abortion bills of their own that they hope can pass muster with the reconfigured U.S. Supreme Court. (AP Photo/Jose Luis Magana)
--

In the midst of Donald Trump's impeachment trial, as Democrats continue to lay out a flawless case demonstrating the president's guilt, Trump is turning to the anti-sex lady-hater brigade to bolster him. That's right: On Friday, Trump will become the first president to show up in person at the annual March for Life. Other Republican presidents have just phoned in their remarks from a distance, since while they need the votes of anti-abortion fanatics, they have clearly found such people as pleasant to be around as the rest of us do.

But Trump is desperate to shore himself up with his almighty base, and that means maximum pandering to the people who have a fetish for forced childbirth. So he's got to show up and talk directly to the fundamentalists and the squads of high school virgins they bus in, using them to fill out the ranks of marchers before those teens start having sex and drifting away from the anti-choice movement.

That Trump is turning to these people as a comfort blanket and a shield against the political damage of impeachment might seem strange at first: What does punishing women for having sex have to do with blackmailing Ukraine? But in truth, the whole situation makes a lot of sense if we unpack it a little.

That's because the tactics that Trump and his defenders are using to ward off consequences for his crimes are those the anti-choice movement has honed for decades: Phony piety, bad-faith arguments, a practiced rejection of facts, nutty conspiracy theories and a stalwart belief that neither democracy nor justice should stand in the way of white male domination.

For decades, the anti-choice movement as been the vanguard for the worst kinds of right-wing tactics. Everything that we associate with Trumpism, from the nonstop lying to the rise in violent tactics to intimidate the opposition, was field-tested by anti-choicers before it was spread out into the conservative movement as a whole. And now these tactics are being deployed to protect Trump himself.

The most frustrating aspect for those who are following the impeachment process, but aren't part of the Trumpist cult, has been the fact that Republicans seem to live on an entirely different plane of existence from the rest of us. While those of us living in the reality-based plane see quite clearly that Trump is a liar and a criminal facing down a mountain of evidence of his guilt, Republicans claim to see Trump as an innocent lamb who is being unfairly persecuted. Many Republicans, such as the infamous Rep. Devin Nunes of California, ranking member of the House Intelligence Committee, have gone a step further, spinning wild conspiracy theories alleging some fictional plot against Trump being concocted by Ukrainians and Democrats.

For those who have been working in the reproductive rights space for awhile, these tactics are quite familiar. The anti-choice movement, for decades, has organized by encouraging its followers to ignore medical and scientific facts in favor of often-bananas conspiracy theories and urban legends.

For instance, in the real world, abortion is safer than other common outpatient procedures like wisdom tooth extraction and colonoscopies, and 99% of women who get abortions report feeling relief and not regret, even years after the fact. But in the delusional world of anti-choicers, abortion is a super-dangerous procedure and "abortion regret syndrome" is widespread. In the real world, contraception prevents abortion. Anti-choicers, however, believe contraception causes abortion by tricking more people into having lots of sex.

Indeed, what's remarkable about the anti-choice movement is how they lie about everything. They lie about their motives, claiming to oppose "killing babies," when in fact their opposition to LGBT rights and accessible contraception — as well as their opposition to universal health care — makes clear that their real motives are controlling people's sexuality and enforcing strict gender norms. They claim to be about "protecting women," but in fact abortion bans are meant to make women's lives more miserable. They even try to pass laws forcing doctors to lie to women by telling them they can "reverse" abortions.

Because of all this, anti-choicers have helped to normalize and mainstream the practice of relentless lying in Republican politics. For decades, Republicans have been able to get away with jaw-dropping lies — such as claiming that doctors deliver babies alive and then murder them, that Planned Parenthood ran a secret black market in "baby parts," that black women are committing self-genocide through abortion or that vaccinating teens against HPV will make them promiscuous — largely because the subjects of sex and gender roles make mainstream journalists too squeamish to engage in robust debunking.

The only people who were aggressively fighting back against these lies were feminists, who tend to be marginalized in mainstream political discourse, too often stuck in the "women's issues" ghetto and not taken as seriously as political figures who discuss more male-centric topics. Even today, with more women in political media, it's difficult to get journalists to prioritize questions about reproductive rights when interviewing politicians or moderating debates.

Republicans have used the world of anti-choice politics as a space to practice lying, sharpen their skills at concocting conspiracy theories and test out strategies for getting disinformation into the public discourse, all away from the spotlight of "serious" political media. This also helped train Republican politicians in the art of stifling their consciences and lying shamelessly for political gain.

As one compelling example, look at Sen. Marsha Blackburn of Tennessee. She's become a lightning rod for a lot of outrage, because she has been particularly aggressive in lying to defend Trump, going so far as to repeatedly defame Lt. Col. Alexander Vindman, who testified during the impeachment hearings about Trump's attempts to extort Ukraine's president. Blackburn has been pushing ugly lies about Vindman that seem to originate in the QAnon conspiracy-theory world.

It may be shocking to many people that a U.S. senator is willing to go so far — but not to reproductive rights activists, who have long known that Blackburn's political rise came thanks to her radical anti-choice views, complete with all the lies and conspiracy theories that come with them. She has largely gotten away with it because of mainstream media indifference to anti-choice nuttery. Blackburn, for instance, took the lead in Congress in selling the lie that Planned Parenthood sells "baby parts," as well as falsely accusing doctors of murdering born infants. She's now applying her well-honed skills at shameless lying and defamation to defending her party's president.

A lot of liberals are confused about the mutual admiration club between Trump and anti-choice activists, believing that it's hypocritical for the anti-sex brigade to be so enthused about a thrice-married chronic adulterer. But it actually makes perfect sense, starting with the fact that anti-sex ideology has always made exceptions for straight male horndoggery, and that Trump shares the misogynist worldview of anti-choicers.

But perhaps most important is the shared commitment of both Trump and the anti-choice movement to lie all the time about everything. Which, in turn, is rooted in their shared contempt for democracy. After all, just as Republicans plan to acquit a guilty president against the will of the majority of Americans, anti-choicers have been working to ban abortion against the will of 7 out of 10 Americans. For both Trump and the anti-choice zealots, the end justifies the means and there's nothing wrong with shameless lying to get their way.