Guy Ritchie's "The Gentlemen" is so crass and cringe-worthy, it's criminal 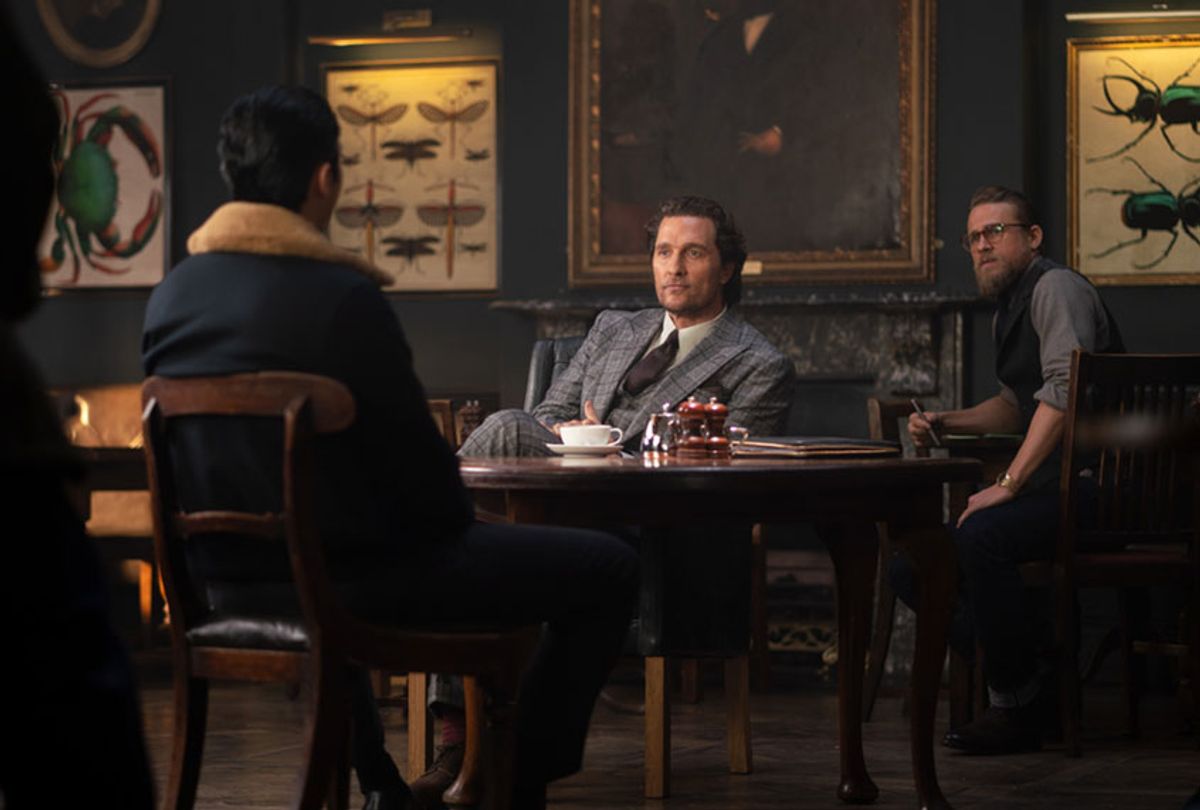 In writer/director Guy Ritchie's crass, joyless film, "The Gentlemen," the smarmy private investigator Fletcher (a scenery-chewing Hugh Grant) recounts a story to Ray (Charlie Hunnam) in grandiose detail. Fletcher asks Ray to picture this as an old school, anamorphic, cinematic journey — in 35MM no less — and then "The Gentlemen" cuts to images of celluloid to play into this fantasy. It is one of many self-reflexive, impressed-with-itself moments in this film, not unlike when Fletcher calls for a smash-cut, and the film abruptly jumps to the next scene.

Ray becomes noticeably impatient listening to Fletcher, who claims he is "laying pipe," Hollywood parlance that means setting the stage. His recitation is to provide Ray with edification as to why Fletcher deserves 20 million in exchange for silence regarding matters relating to Ray's boss, Mickey Pearson (Matthew McConaughey), a marijuana tycoon.

There may be a juicy story of double-crosses here in a plot where various characters want "double bubble," (i.e., to be paid twice), but the pipe Ritchie lays in "The Gentlemen" is rusty. The characters are mostly tics and types, more caricatures than actual people, which makes it hard to care about — or root for — them. Mickey justifies his illegal business by indicating that weed doesn't kill anyone (like heroin and other, harder drugs do). But that does not make him particularly heroic or sympathetic.

There are other, more serious problems in "The Gentlemen." Ritchie thinks casual racism is funny, and the film's Asian characters are all called the derogatory c-word: "Chinamen." Most everyone else on screen is called the other, equally taboo c-word, which is meant to be cheeky, but it is not. It is offensive; cringe-inducing rather than amusing, and one wonders when the juvenile Ritchie is going to grow the f**k up and quit being so conceited about his smartassery.

The filmmaker also can't resist injecting his comedy with some lame homoerotic hijinks, as when Fletcher, who liberally drops the word "darling," can't seem to resist placing his hand on Ray's upper thigh. These moments, like the rest of this jury-rigged-for-effect film, are just throwaway bits typical of the smug, groan-inducing script. It is not really that clever that two characters have an exchange over how the Vietnamese name Phuc (Jason Wong) sounds like English-language profanity in another strained and racist moment.

There is not even that much style on display. An early shot of blood in a pint of beer impresses, and there are some natty clothes on display. But that's about it.

Almost everything in "The Gentlemen" seems to be trying too hard. The attempts at comedy — such as a man who projectile vomits twice(!), or a bit about an insensible character having sexual congress (against his will) with a large farmyard animal — are designed to be outrageous. But they are tasteless and land with a thud. (A reminder: sexual assault is never funny. At least one near-rape in the film isn't played for laughs.)

Much of "The Gentlemen" lacks excitement. The only really interesting scene involves a sequence in which Ray reluctantly agrees to rescue Laura (Eliot Sumner) from a drug den in a towerblock. Ray easily takes command of the scene, threatening Power Noel (Tom Rhys Harries) and taking him and his mates down. This episode is absorbing because Ray exudes a calm, cool, and collected demeanor until things go sideways. Alas, Ritchie plants a seed that forces viewers to wait for the expected to happen. He does this often; one character literally gets handed a gun in a box. Anyone who has seen a film knows it will go off by the last reel.

It is not that the lack of surprise in these moments that is unwelcome. Setting up what will happen can maximize tension waiting for the inevitable to happen. But Ritchie is such a lazy filmmaker that he lets the suspense fizzle out as the action unfolds. During a sluggish chase scene, one must wait for the cocky kid on the bike to get doored. Even when Ritchie "rewinds" a scene (because it didn't quite happen the way the unreliable narrator tells it) that gimmickry feels more tired than inspired.

Another problem with the film is that the actors are ill-used or underused. This may be the first time Matthew McConaughey exudes absolutely zero charisma on screen. He gave a more engaging performance in last January's "Serenity." Likewise, Hugh Grant's turn as an unctuous raconteur should be spellbinding, but he comes off as an old ham. In support, Michelle Dockery and Henry Golding are completely wasted. They both appear to have been cast only for their looks. The only valuable performances are by the aforementioned Hunnam, and Colin Farrell, who delights in playing the cunning and lippy Coach. (Grant should have taken a lesson).

"The Gentlemen" — and yes that title is meant to be ironic — should be slick and stylish, or at least dumb fun. But mostly this crass, witless, and unpleasant attempt at comedy showcases Ritchie's lack of sense and taste.

As two characters agree after looking at the bestiality video, "You can't unsee it." But one does not have to look at it in the first place.

"The Gentlemen" is in theaters Friday, Jan. 24.