“A lot of the people in the audience aren’t agreeing with you,” Earhardt told Rivera after he spoke about Giuliani 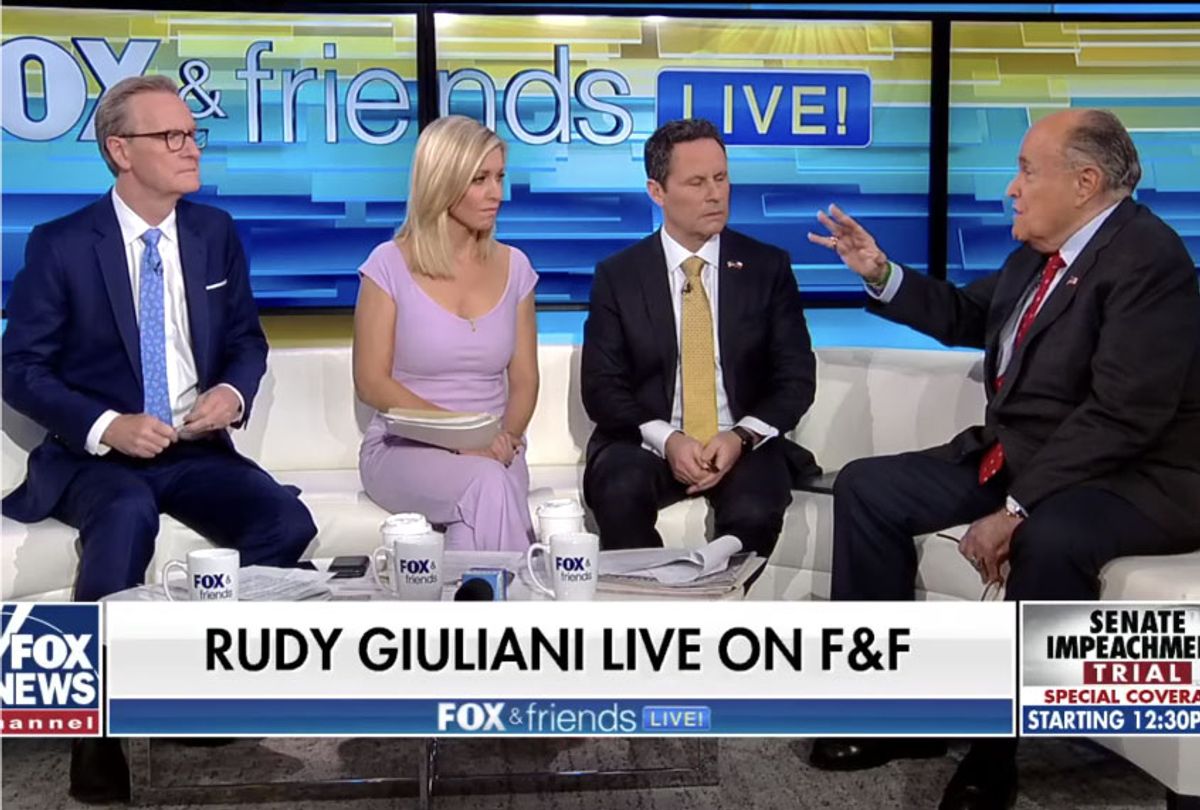 "Fox & Friends" hosts were shocked by Geraldo Rivera's blunt assessment of Rudy Giuliani — who had appeared on the show a short time earlier.

President Donald Trump's attorney spun wild claims about Joe Biden's dealings in Ukraine, as the Senate considers impeachment charges involving Giuliani's own actions there and the president's pressure scheme against its government, and Rivera expressed shock and alarm.

"I knew him when he was a newly appointed U.S. Attorney, and he became America's mayor, the most magnificent elected official on Earth," Rivera said. "To see him deteriorate right before your eyes, I love the guy."

Co-host Steve Doocy, who had repeatedly tried to cut off Giuliani's conspiracies while he was sitting in the same chair as Rivera, acted surprised.

Rivera questioned why Giuliani was working in Ukraine as the president's attorney, instead of a government official

"Why wasn't he appointed a presidential envoy with an official title to go do a righteous job to probe?" Rivera said. "It bothers me also that he's hanging out with Lev Parnas, this sleaze bag."

Doocy pointed out that Giuliani was the godfather to Parnas' child, but Rivera pressed on.

"I don't know him, I only know him from what he has done and said apparently for the president and then against the president, he seems to be a treacherous, back-stabbing self-serving con who is trying to avoid jail time," Rivera said. "He reminds me a lot like Michael Cohen, sleazier than Michael Cohen, Lev Parnas, by association."

The hosts began looking around nervously at that point.

"What in the world is America's mayor doing hanging out with a guy like Lev Parnas?" Rivera said.

Co-host Ainsley Earhardt broke in at that point, and said members of the studio audience were reacting negatively to his criticism.

"A lot of the people in the audience aren't agreeing with you," she said.

Rivera then turned to address the studio audience.