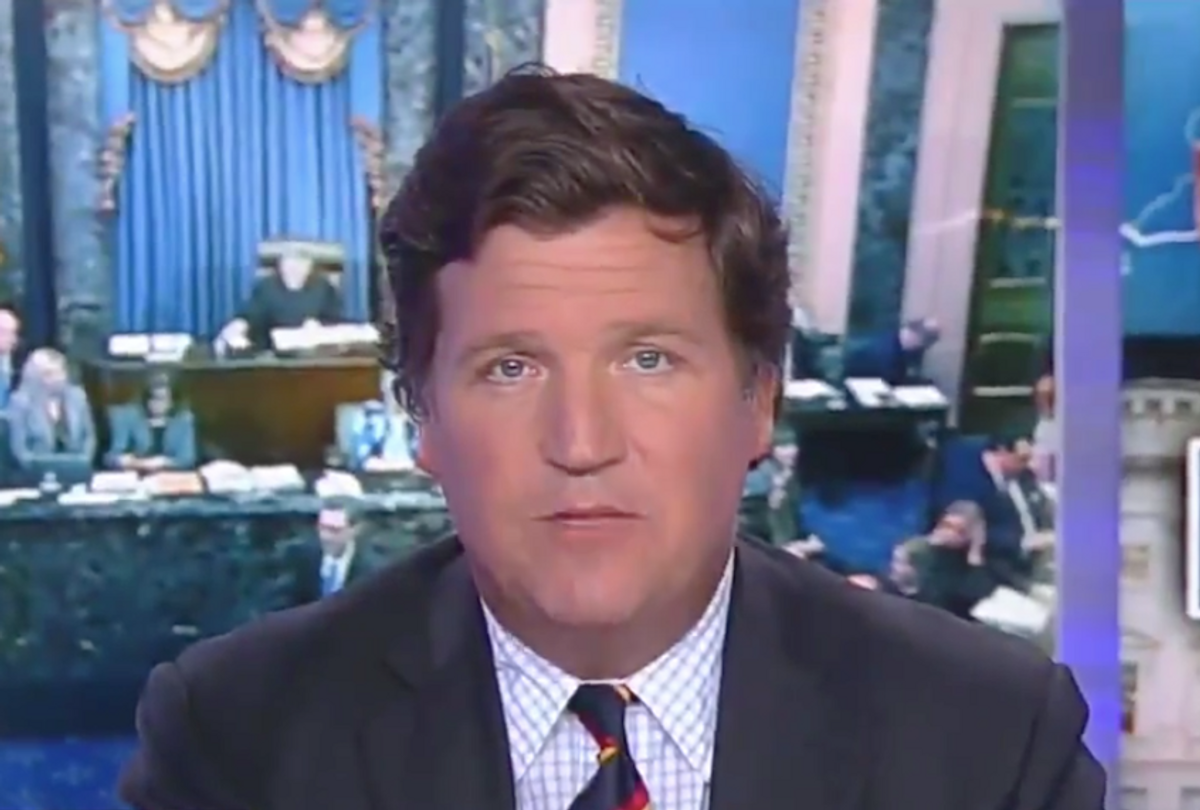 When Rep. Hakeem Jeffries addressed the U.S. Senate on Thursday night as part of President Donald Trump's impeachment trial, there was a crucial difference between how Jeffries' speech was covered on different cable news outlets: while CNN and MSNBC broadcast the speech, Fox News muted the speech while its pundits offered pro-Trump talking points. CNN and MSNBC allowed viewers to hear Jeffries making a compelling case for removing Trump from office; Fox News let views see Jeffries but not hear him. And that Trump-friendly way of covering the trial is the subject of an article journalist Aaron Rupar wrote for Vox this week.

"Starting with 'The Five,' the network's early evening roundtable commentary show, and continuing throughout the evening, Fox News broadcast portions of screen-in-screen video of the trial," Rupar explains in his Vox article. "But instead of playing the audio, network hosts provided the normal Trumpian spin. So while someone who just looked at the screen may have concluded Fox News was covering the trial, in fact it wasn't covering it at all."

Fox News, Rupar adds, "went as far as to broadcast screen-in-screen video of the trial during commercial breaks — but again, without the sound that was necessary to make any sense of what was being discussed."

Fox News has the optics of covering the #ImpeachmentTrial without actually covering it. They've been showing screen-in-screen video of the proceedings without audio. Instead, hosts are providing Trumpian spin. It's propaganda giving the illusion of journalism. Remarkable. pic.twitter.com/NKbN2Sic1o

Step 1: Dems try repeatedly to get new evidence into the trial
Step 2: Republicans repeatedly vote it down
Step 3: Fox criticizes Dems for having no new evidence.

Fox's Jason Chaffetz: "It had nothing to do with proving the facts, there was no new evidence" pic.twitter.com/LSdPEKkzGE

Millions of Fox News viewers, Rupar points out, have been fed a steady diet of "propaganda" and misinformation during Trump's impeachment trial.

"The 2.7 million people who have been watching Fox News' impeachment trial coverage at any given time are being told a story about it that's completely untethered from reality — one that reinforces America's deep polarization between the roughly 50% of voters who want Trump removed from office and the 40 to 45% who continue to support him through scandal after scandal."

Like Jeffries, Rep. Adam Schiff (the California Democrat who chairs the House Intelligence Committee) has, during the trial, made convincing arguments in favor of removing Trump from office for his impeachable offenses — which, according to Schiff, include trying to pressure Ukrainian President Volodymyr Zelensky into investigating former Vice President Joe Biden and his son, Hunter Biden, and withholding military aid to Ukraine in the hope of getting that investigation. Someone who watched MSNBC or CNN got to hear Schiff skillfully laying out fact after fact after fact showing that Trump committed impeachable offenses. But Fox News carnival barkers like Sean Hannity and Tucker Carlson, as Rupar points out in Vox, haven't seriously addressed the facts Schiff presented — only insulted and defamed him.

Tucker Carlson began his show dismissing the #ImpeachmentTrial by comparing it to "a movie written & directed by children whose ending you already know, & by the way, it's 20 hours long, in Hungarian, with misspelled subtitles." That's how his viewers will process things. pic.twitter.com/0PXgxFuXNA

Fox News added scary music and, in one section, a red overtone to an Adam Schiff supercut from today pic.twitter.com/yV2wRdOG7d

"There's nothing Schiff could have said on Wednesday that Fox News' evening and primetime hosts wouldn't have spun as evidence of his mental instability, his obsession with taking down Trump," Rupar asserts. "And while viewers were being spun on Wednesday, they were shown soundless video of the trial, the misleading implication being that they don't have to bother watching it since Fox News is on top of it for them."