If it’s below 40 degrees in South Florida, the forecast calls for falling iguanas

Beware cold-stunned "chicken of the trees." 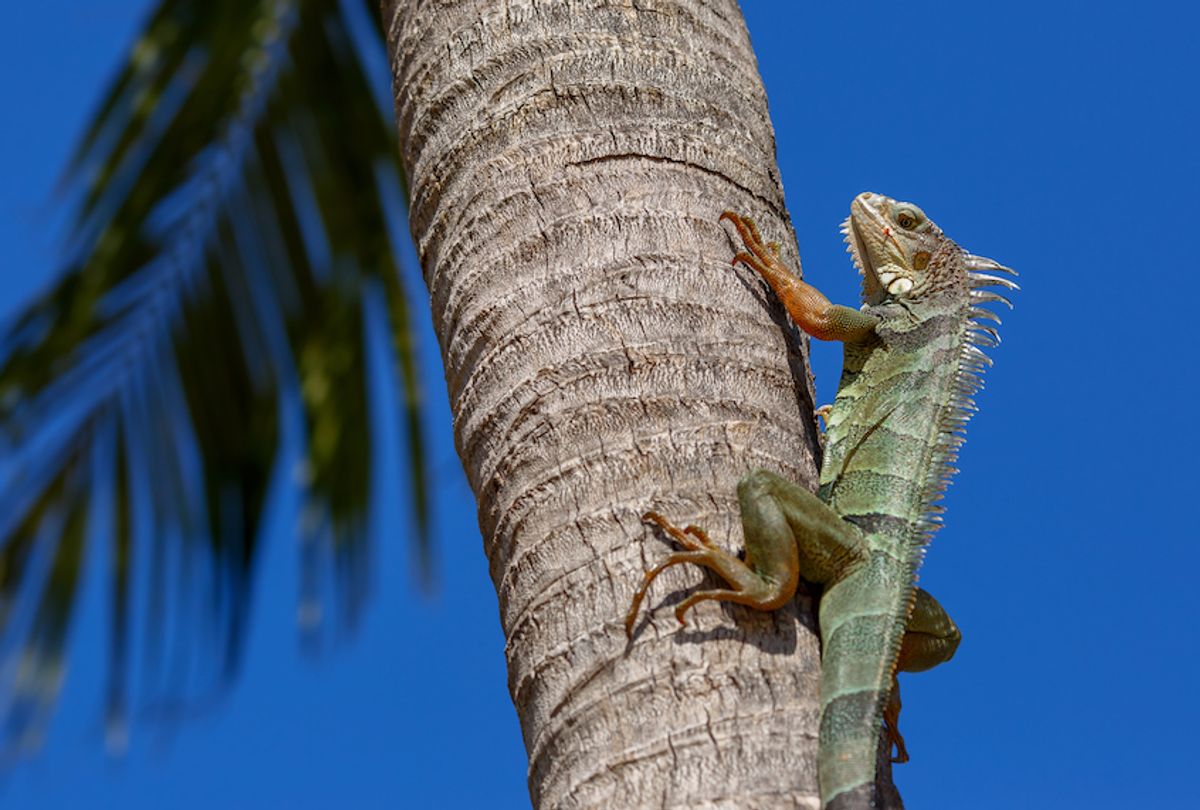 As temperatures were dipping this week, the National Weather Service issued freeze warnings for much of Florida and Georgia, adding a warning in South Florida for "falling iguanas." University of Florida wildlife ecologist Frank Mazzotti explains the physiology of cold iguanas and why many people in Florida aren't shedding tears for the iguana-cicles lying around the region.

Jan 21 - This isn't something we usually forecast, but don't be surprised if you see Iguanas falling from the trees tonight as lows drop into the 30s and 40s. Brrrr! #flwx #miami pic.twitter.com/rsbzNMgO01

What happens to iguanas when temps drop?

When temperatures fall into the 40s and 30s, green iguanas become cold-stunned. They enter what's called a state of torpor. Their breathing slows down and so does their metabolism.

Used to more balmy conditions, this is how tropical reptiles protect themselves from cold temperatures. Torpor is an involuntary response, and the animals trade torpor's benefit of conserving heat in cold conditions for an increased risk of being snagged by a predator.

Torpor causes green iguanas to lose muscle control, and since they live in trees, they fall out of trees. A several pound iguana falling on your head would definitely get your attention.

What should you do if you see a dazed iguana?

If you witness falling iguanas, your best course of action is to do nothing. If the animal warms up quickly, it will recover on its own. If cold temperatures are prolonged, the iguana may die.

But please do not try to "rescue" any iguanas. Native to Mexico, Central and South America and some Caribbean islands, green iguanas are an invasive species in the southern United States and you cannot legally set them free here. The iguanas you spot in South Florida are descendants of animals brought here to be sold as pets.

If you want to get involved when you see a fallen iguana, a better course of action is to eat it. In their native range they are prized as delicious food items and are called chicken of the trees or bamboo chicken.

Why are some officials in Florida happy to see fewer iguanas?

Officials believe green iguanas are rapidly increasing in numbers and expanding in range, though there are no concrete counts for how many live in Florida today.

For a long time, green iguanas flew below the radar of management agencies. Unlike Burmese pythons, for example, which eat mammals and birds, green iguanas did not pose an obvious threat to ecological resources. Any damage they did was confined to backyards where they readily consume landscape plants, burrow into seawalls and sidewalks and poop prodigiously.

But with more green iguanas on the loose, they are now commonly found on water management structures such as levees and pump stations where they actively burrow, especially nesting females. These infrastructure facilities control water levels in South Florida and keep neighborhoods dry while providing a water supply for both agriculture and residences.

Iguana-caused damage is not minor. For example, the City of West Palm Beach recently paid US$1.8 million to repair a weir that was partially damaged by burrowing iguanas and to armor the low dam against further damage.

Removing invasive iguanas is now necessary to protect Florida's ability to manage its water. So a cold snap that eliminates some of the iguana population might actually be good news in some quarters.