"This proposal by a group of infamously anti-woman, anti-choice Congress members is egregious to say the least." 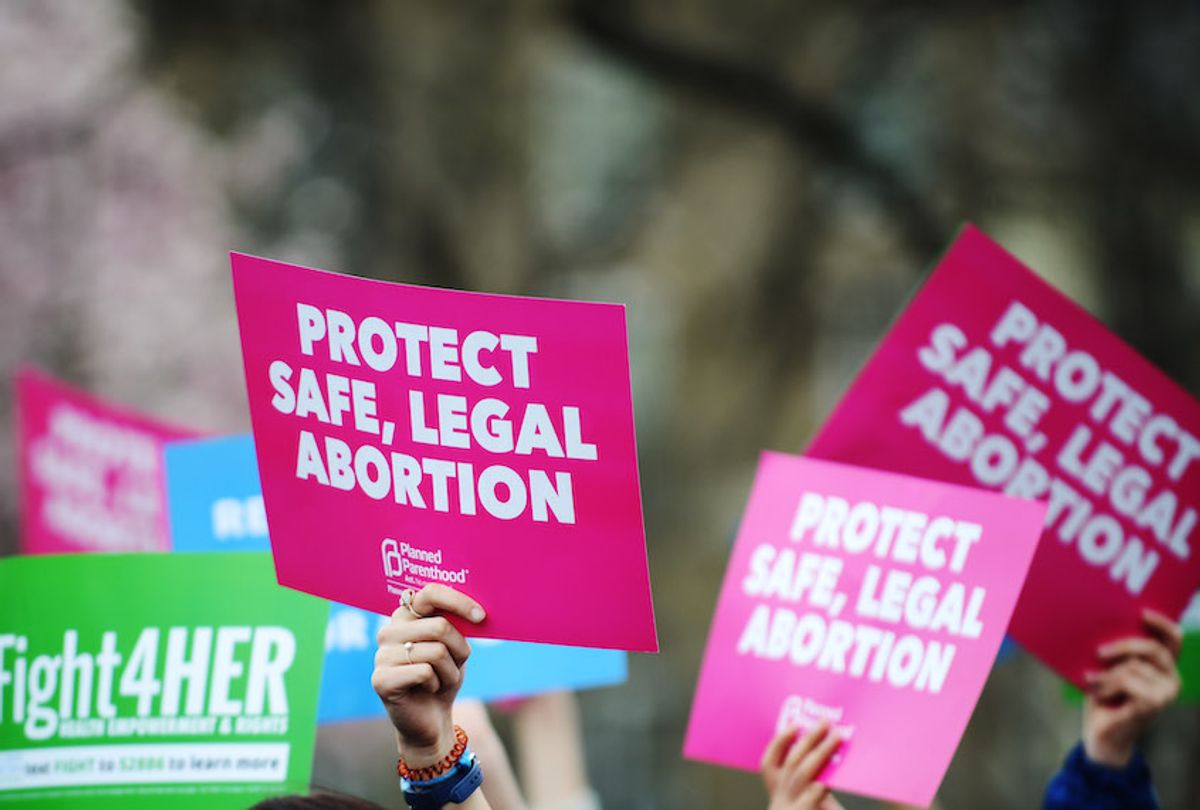 People attend a "Fight4Her" pro-choice rally in front of the White House at Lafayette Square on March 29, 2019 in Washington, DC. (Astrid Riecken/Getty Images)
--

"This proposal by a group of infamously anti-woman, anti-choice Congress members is egregious to say the least," said Serra Sippel, president of the Center for Health and Gender Equity (CHANGE).

Thursday marked the three year anniversary of President Donald Trump reinstating the policy, which he expanded and rebranded with the euphemistic name "Protecting Life in Global Health Assistance."

was a bad/terrible/atrocious policy first implemented by the Reagan administration in 1984 that unfairly targeted family planning programs and blocked millions of women and youth from access to contraception that can transform their lives. The Trump-Pence administration dramatically expanded its unethical directive and used it to deny funding for HIV/AIDS prevention and treatment, nutrition, maternal health, family planning, and malaria.

But for lawmakers including Sens. Mark Lee (Utah) and Marco Rubio (Fla.), even that expansion didn't go far enough.

In a letter sent Thursday to Secretary of State Mike Pompeo, the Republicans urge the administration to withhold from U.S. non-government organizations (NGOs) federal foreign assistance if they don't "meet abortion-related program integrity standards at least as strong as those in effect for the Title X family planning program at home." Trump's Title X restrictions have been sharply criticized, as theybar groups from even referring women to another provider or counseling woman about the option of abortion or risk not receiving federal funding.

Serra Sippel, in her statement, said the lawmakers "are bad faith actors making bad faith legal and political arguments, with no knowledge of the real systems or harm they are invoking."

The letter points to several U.S. NGOs including Population Services International and Pathfinder International, which the lawmakers say are "involved in abortion activities overseas" and that received federal funds in 2018.

The named groups, said Sippel, "are some of the most prominent groups whose work over the decades have contributed to increased contraceptive access, decreased maternal deaths, and curbing the global HIV pandemic."

"The decades of progress that have been made in global health through the work of healthcare providers both U.S-based and abroad have been critical in saving thousands of lives," she added. "These escalating attacks on life-saving organizations that receive global health assistance is an affront to the U.S. citizens who expect our country to be a leader in providing health care around the world."

In a press statement accompanying the letter, Sen. Lee asserted that the Trump gag rule "has already saved and will continue to save countless lives across the globe." But a data sheet (pdf) out Thursday from CHANGE suggests that couldn't be further from the truth.

"The evidence is clear that the gag rule threatens the health, lives, and rights of the most vulnerable populations—the poor, young people, and LGBTQ people. This policy is not supported by any evidence base and threatens the efficacy of the U.S. government's $9 billion of investment to achieve global health impact," wrote Kerrigan and Munyasia.

The pro-choice Guttmacher Institute, in a Twitter thread Thursday with Population Connection Action Fund and the International Women's Health Coalition, highlighted the harms of Trump's rule and called for passage of the Global Health Empowerment and Rights (HER) Act, introduced last February, to permanently prohibit the rule.

A1. The Global Gag Rule blocks U.S. global health assistance from going to any organizations that use their own funds for abortion-related work. It is blatantly unethical & interferes in the patient-provider relationship. #GlobalGagChat https://t.co/PXyVljCLnR

Clinics that rely on U.S. funding as their main source of healthcare are affected by the GGR. Defunding these clinics takes away the only form of healthcare most of these people have. #GlobalGagChat https://t.co/y6jbGfAPoC

A5. In 1984, under the Reagan administration. Previous versions of the policy applied to US aid for international family planning programs. The Trump administration has escalated the rule's application to all global health assistance. https://t.co/XL4zgDELij #GlobalGagChat https://t.co/hVkcezO3Ma

A6: WELL, SINCE YOU ASKED! Trump's Global Gag Rule is even WORSE than the original abhorrent policy because it was
1. Expanded from impacting $575 million to $8.8 billion (!)

Like we wouldn't fight back? The #GlobalHERAct would repeal this awful policy and ensure that no future president could bring it back unilaterally. That's why I #Fight4HER ! #GlobalGagChat https://t.co/rSrbbKPDbD

A8. #GGR forces foreign NGOs to withhold abortion-related info & services from patients, while the Title X gag rule imposes similar restrictions on US providers. Both are part of a coercive agenda to undermine sexual & reproductive health. https://t.co/c2DOkCr1au #GlobalGagChat https://t.co/p6MwmpnSnD

Vote! We need pro-choice elected officials who will stand up for global reproductive freedom and #Fight4HER. #GlobalGagChat@popconnect https://t.co/StMEuquNa3

Every day, we are working with our global partners to learn and fight alongside the very communities affected by Global Gag.

We can only see true progress uplifting and prioritizing the voices of people directly impacted. https://t.co/797vnSjDvY