Press Watch: Adam Schiff's cry for truth and justice is also an indictment of political journalism

Elite journalists must have felt Adam Schiff was directly scolding them for their failures. They were right 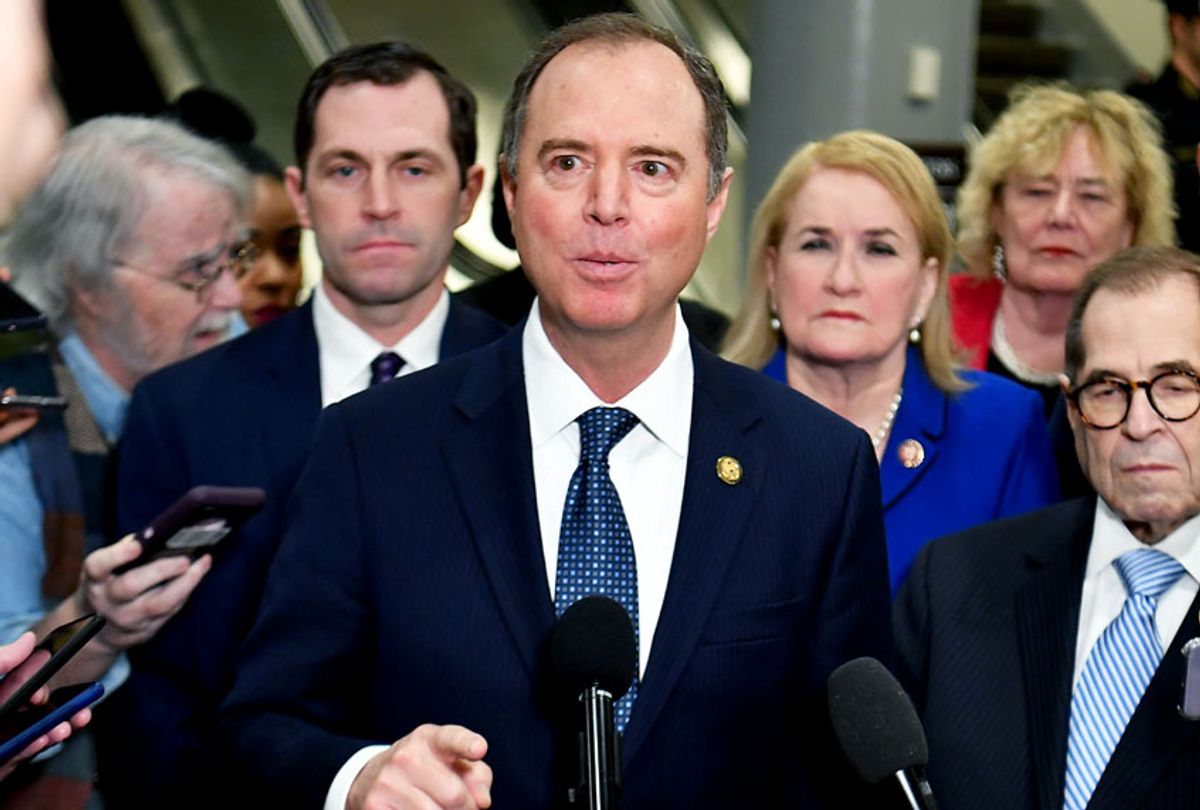 Lead House Manager Adam Schiff speaks to the press at the US Capitol in Washington, DC (MANDEL NGAN/AFP via Getty Images)
--

What's been left out in the incremental coverage of daily events and tit-for-tats and process and fidget-spinners is that there is an easily discernible right and wrong here. There are obvious truths and even more obvious lies.

The nearly universal recognition that due to partisan brute force Trump will not actually be removed has made it easy for journalists to keep such issues at arm's length and from that distance present two sides, sometimes even falsely equated.

Schiff's primary audience was, of course, the 53 apparently intransigent, reality-denying Republican senators. But his comments were also a reproof to everyone who has found it more convenient to blur the distinction between right and wrong, truth and lies. Consider these words:

No Constitution can protect us if right doesn't matter anymore.

To the elite newsroom leaders who have so often chosen to respond to lies by throwing up their hands rather than shouting the truth from the rooftops, who have tried to remain non-confrontational and measured, who let themselves get gaslighted, it must have sounded like scolding.

You can tell it made them uncomfortable.

Just look at how they covered it.

You can chalk some of it up to the fact that Schiff's closing came a little after 10 p.m. Eastern time, after stories had already been written and edited, and after senior editors had gone home. (So much for internet time.)

But Schiff's comments literally didn't make it into the Washington Post's lead story, which they didn't bother to update after 8:45 p.m.

Over at the New York Times, Sheryl Gay Stolberg or her editor hastily inserted a short summary four paragraphs into an article that was mainly about how the Democrats "took a calculated risk" by confronting Trump's lies and conspiracy theories about Joe and Hunter Biden.

There was also a liveblog entry from Nicholas Fandos, with five short paragraphs about his remarks

The Los Angeles Times had a three-hour time advantage, but all Sarah D. Wire and Chris Megerian did was stick a couple paragraphs about Schiff's comments at the end of their story.

The Associated Press — where not all the editors go home at night — appropriately retopped their main story and headlined it "Democrats argue 'right matters' in Trump impeachment trial." But they still gave Schiff's comments short shrift.

Of the sites I looked at, only CNN responded appropriately.

Schiff's comments were the kind that journalists who care about accountability could celebrate.

So did Maria Bustillos, who writes for the Columbia Journalism Review:

But our elite political journalists don't like being criticized, and I'm pretty sure that's how they took Schiff's comments.

It's the same reception they give people who talk passionately about climate change as an existential crisis or extreme income inequality as the result of a rigged system.

They know, on some level, that they haven't risen to the challenge of the times. But they don't want to hear it.