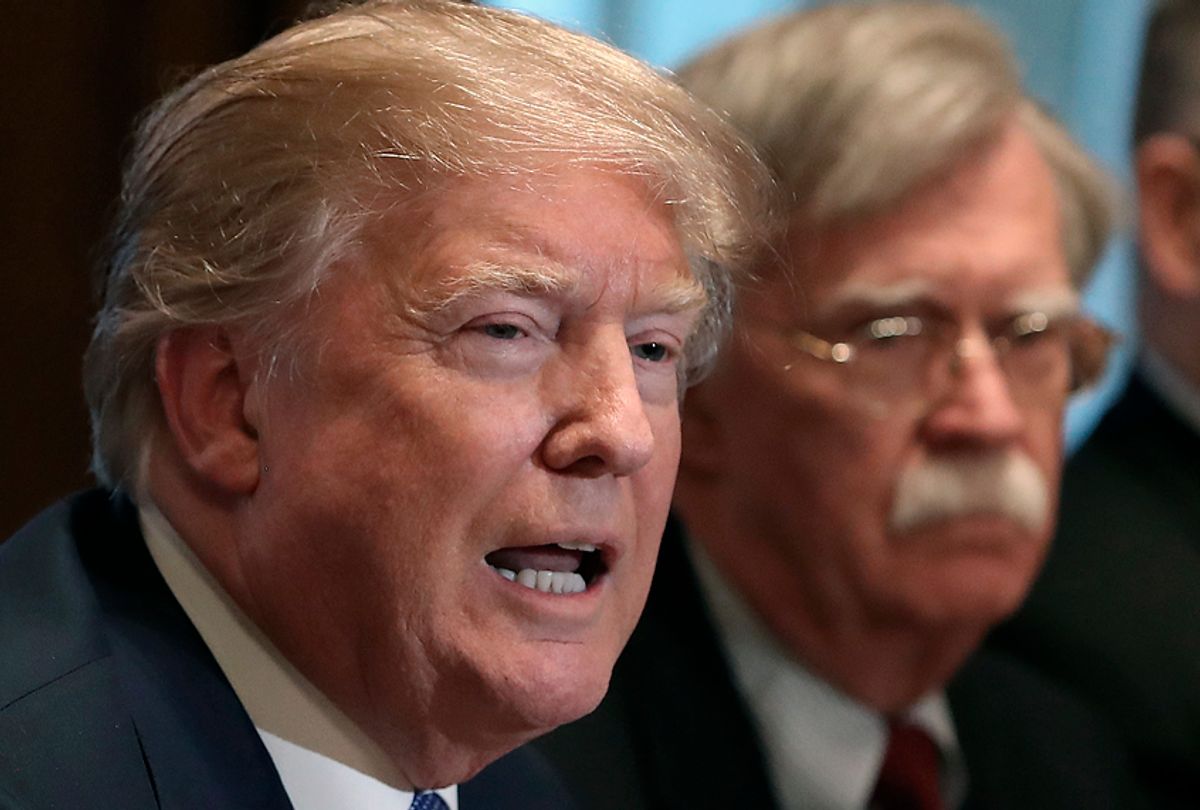 The impeachment trial of President Donald J. Trump continues this week, with the president's defense team making the case for his acquittal followed by questions from senators. The president's lawyers opened their presentation on Saturday with a mere two hours of arguments.

It's clear they are anxious to get this over with so that the Republicans can bring the "vindicated" Trump into the House chamber like a conquering hero on Feb. 4 for the State of the Union address. They certainly don't want him to deliver it in the middle of his impeachment trial. If the incontinence Trump has displayed on his Twitter feed over the last few days is any indication, there's a good chance he'll leap off the dais and try to strangle House manager Adam Schiff with his bare hands.

He came perilously close to an outright threat on Sunday morning:

He didn't say, "He's going to go through some things," but you know he was thinking it.

Throughout the weekend the whole country listened to audio of the president having dinner and intimate conversation with Lev Parnas, the indicted co-conspirator of Ruy Giuliani — immediately followed by footage of the president insisting over and over again that he doesn't know the man. That conversation included a discussion of former Ukraine ambassador Marie Yovanovitch, with Trump saying, "Get rid of her, take her out," as if he were Sonny Corleone giving the order to Luca Brazzi.

There was no word from the delicate GOP Victorians who got the vapors during the trial last week about this bullying, mobster talk from the president. Perhaps they all went to a spa retreat to calm their overwrought nerves and didn't hear any of it.

They were present on Saturday morning when White House counsel Pat Cipollone began his presentation with a twist, claiming the Democrats were trying to meddle with the 2020 election. "They're here to perpetrate the most massive interference in an election in American history," he said. You have to give them credit for gall, if nothing else. They are defending the president who eagerly welcomed Russian interference in the 2016 election and extorted it from a different country for 2020 by claiming that using the constitutional remedy of impeachment for such acts is actually preemptively stealing the next election. I don't think they can even hear what they are saying anymore.

Reporting throughout the weekend suggested that despite the president's anemic defense, Senate Majority Leader Mitch McConnell and the White House have been able to keep Republicans on board, leading to a quick end to the trial, possibly as early as Friday.

Nonetheless, there has still been some jockeying back and forth over the question of witnesses. Sen. Josh Hawley of Missouri is said to be preparing subpoenas for former Vice President Joe Biden and his son Hunter, Intelligence Community Inspector General Michael Atkinson and the unnamed whistleblower, threatening a possible circus that has the timorous vulnerable senators up for re-election this year in a tizzy. Cipollone complained during his Saturday presentation that Schiff didn't appear before the House Judiciary Committee, hinting that he might be called to testify as well.

Trump is said to be happy with the trial so far, and even thinks he can get a few Democrats to vote for acquittal. He's particularly focused on Joe Manchin of West Virginia and Doug Jones of Alabama, both of whom have been saying they have an open mind. But it's pretty obvious that both Manchin and Jones are dangling this possibility in order to hear witnesses, which they've both demanded from the beginning.

That seemed increasingly unlikely as the weekend wore on. From what we could tell, with the exception of Sen. Mitt Romney of Utah, who said he was "very likely" to vote for witnesses, the GOP Senate caucus seemed to be firm in its desire to end the process as quickly as possible.

Then came Sunday night and this New York Times bombshell:

President Trump told his national security adviser in August that he wanted to continue freezing $391 million in security assistance to Ukraine until officials there helped with investigations into Democrats including the Bidens, according to an unpublished manuscript by the former adviser, John R. Bolton. …

Over dozens of pages, Mr. Bolton described how the Ukraine affair unfolded over several months until he departed the White House in September. He described not only the president's private disparagement of Ukraine but also new details about senior cabinet officials who have publicly tried to sidestep involvement.

We don't know how this manuscript came into the New York Times' hands, but the paper claims that Bolton shared drafts with close associates and delivered one to the White House to determine whether it contains classified information as is usual practice. While the motive behind leaking it is unclear, it stands to reason that Bolton may have feared that the White House would withhold the book on national security grounds after hearing the president say this in Davos last week:

That sounds very much like a rationale Trump's lawyers were testing out to keep Bolton's book from seeing the light of day.

And speaking of the lawyers — and Mitch McConnell too, for that matter — they all knew what Bolton would say since the manuscript was turned over to the White House at the end of December. Yet they went before the American people and lied repeatedly as recently as Saturday. There doesn't seem to be any accountability for anyone in this administration, so I doubt there will be penalties. But these lawyers are shockingly unethical.

So, by the way, is John Bolton. All this drama could have been avoided if he had simply volunteered to speak before the House under oath. Perhaps he's more of a Trumpist that he likes to think.

We don't know whether any of this will make a difference. Donald Trump has strong-armed senators into covering up for his crimes altogether, rather than allowing them to simply say that what he did was wrong, but he hadn't committed an impeachable offense. He won't stand for anyone saying he isn't perfect. So they must all agree to be his accomplices.

Those senators may have been tossing and turning on Sunday night, however. In just the last three days, recordings have come to light that show Trump has been lying about knowing Parnas and Fruman, and now Bolton's book testifying to Trump's personal involvement has been leaked. Every day there's something new. They have to be wondering how much more they will be forced to answer for next November